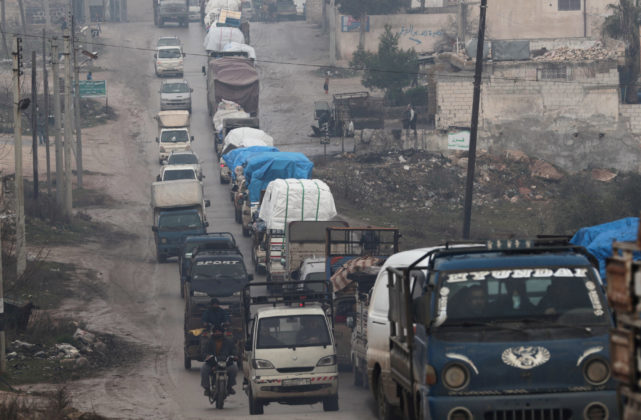 AZAZ, Syria (Reuters) – Cold weather, disease and a lack of shelter and medicine threaten hundreds of thousands of civilians as they flee fighting in Idlib province, in one of the biggest upheavals of Syria’s nine-year civil war, aid groups and doctors said.

The migrants, their numbers swelling by the day, are trapped between advancing Syrian government forces, keen to crush the last significant opposition stronghold, and Turkey’s closed border.

Some are having to flee by foot, while many others are having to sleep in their cars, as Syrian and Russian warplanes bombard the highways leading north toward Turkey.

A U.N. official appealed for emergency financial assistance to help an estimated 800,000 people in northwest Syria to survive the coming months.

“People are facing a tragedy. For the last two weeks it’s been very, very cold. There is rain and mud, and influenza is spreading,” said Wassim Zakaria, a doctor who works in a clinic in Idlib city that closed on Monday due to heavy bombardment.

The numbers on the move have increased in recent days as the forces of Syrian President Bashar al-Assad advanced to within 8 km (5 miles) of Idlib city, said Selim Tosun, the Turkish Humanitarian Relief Foundation’s (IHH) media adviser in Syria.

“If the cold weather continues…there is a risk of epidemics as a large migrant flow is coming,” he said.

Since November, 692,000 people have abandoned towns south of Idlib city, Tosun said. The number “is rising every hour” and could reach 1 million, he added.

Zakaria said people had also started to flee from Idlib city but their options for shelter were limited, with people forced to sleep in cars or tents, many near the walled-off border which prevents Syrians taking refuge in Turkey.

“It’s like people are imprisoned here. Last week women and children demonstrated at the border, asking to be allowed across,” he said.

Turkey’s IHH is distributing urgent aid and blankets to those traveling on the highway from Idlib city and has set up 2,000 tents, with plans to put up another 1,500, Tosun said.

Some 700 breeze-block dwellings have also been built out of a total 10,000 which Turkey is planning to erect in the region south of its border, he said.

He added that many people were now seeking shelter beyond Idlib province, already home to waves of civilians displaced earlier in Syria’s civil war, and were heading toward Afrin and Azaz, areas just to the northeast under the control of Turkish-led Syrian rebel forces.

David Swanson, U.N. regional spokesperson for the Syria crisis, said $336 million was urgently needed to help those being displaced, with shelter a critical problem.

“This crisis continues to deteriorate by the minute. This is easily one of the largest waves of displacements since the (Syrian civil war) began in March 2011,” Swanson said.

“Hundreds of thousands of people are in now in urgent need of critical, life-saving assistance,” he said.

The United Nations has put the number of displaced from the Idlib fighting since Dec. 1 at 520,000, with a further 280,000 seen at “imminent risk of displacement”.

Many of the displaced are staying with host communities who themselves are struggling to cope, while others have sought shelter in schools or mosques, or are sleeping in their vehicles or in the open air, said Swanson.

“The humanitarian situation in Syria is more catastrophic than ever before. Who would have imagined that entire cities would be displaced in a single month?” said Atef Nanou, manager of Molham Volunteering Team, a relief group in northern Syria.

He said he had encountered families unable to get away from the bombing because they couldn’t afford fuel for their car or transportation costs.

“So they either stayed despite the bombing or went out on foot on the international road that the Syrian regime and Russian warplanes are bombing around the clock,” Nanou added.

(Additional reporting by Dominic Evans and Daren Butler in Istanbul and Eric Knecht in Beirut; Writing by Daren Butler; Editing by Gareth Jones)