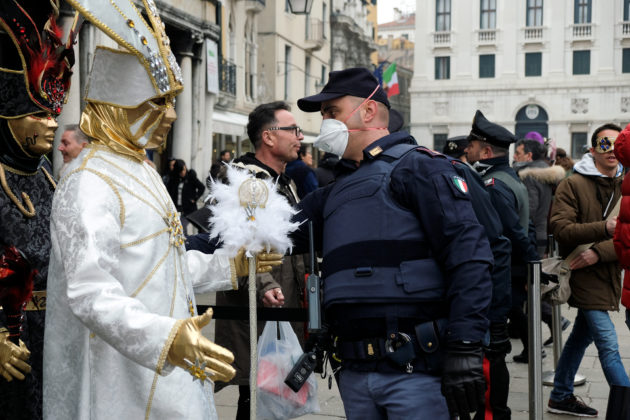 Police officer wearing a protective face mask stands next to carnival revellers at Venice Carnival, which the last two days of, as well as Sunday night's festivities, have been cancelled because of an outbreak of coronavirus, in Venice, Italy February 23, 2020. REUTERS/Manuel Silvestri

By Jane Chung and Emily Chow

SEOUL/SHANGHAI (Reuters) – International concern about the spread of coronavirus outside China grew on Sunday with sharp rises in infections in South Korea, Italy and Iran.

The government in Seoul put the country on high alert after the number of infections surged over 600 with six deaths. A focal point was a church in the southeastern city of Daegu, where a 61-year-old member of the congregation with no recent record of overseas travel tested positive for the virus.

In Italy, officials said a third person infected with the flu-like virus had died, while the number of cases jumped to above 150 from just three before Friday.

Authorities sealed off the worst affected towns and banned public gatherings in much of the north, including halting the carnival in Venice, where there were two cases, to try to contain the biggest outbreak in Europe.

“I was surprised by this explosion of cases,” Prime Minister Giuseppe Conte told state broadcaster RAI, warning that the numbers would likely rise in the coming days. “We will do everything we can to contain the contagion.”

Italian health authorities were struggling to find out how the virus started. “If we cannot find ‘patient zero’ then it means the virus is even more ubiquitous than we thought,” said Luca Zaia, the regional governor of the wealthy Veneto region.

Almost a dozen towns in Lombardy and Veneto with a combined population of some 50,000 have effectively been placed under quarantine.

The European Union said it had confidence in the Italian authorities. “We share concern for possible contagion (but) there is no need to panic,” the bloc’s Economic Affairs Commissioner Paolo Gentiloni told reporters.

Iran, which announced its first two cases on Wednesday, said it had confirmed 43 cases and eight deaths, with most of the infections in the Shi’ite Muslim holy city of Qom. Saudi Arabia, Kuwait, Iraq, Turkey and Afghanistan imposed travel and immigration restrictions on the Islamic Republic.

The virus has killed 2,442 people in China, which has reported 76,936 cases, and has slammed the brakes on the world’s second largest economy. It has spread to some 28 other countries and territories, with a death toll of around two dozen, according to a Reuters tally.

“Despite the continuing decline in reported cases from China, the last two days have seen extremely concerning developments elsewhere in the world,” said Paul Hunter, professor of medicine at Britain’s University of East Anglia.

The World Health Organization (WHO) said on Saturday it was worried by the detection of infections without a clear link to China.

China, which has seen the vast majority of cases, reported 648 new infections. But only 18 were outside of Hubei province, the lowest number outside the epicenter since authorities began publishing data a month ago and locked down large parts of the country. 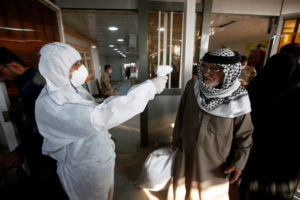 An Iraqi medical staff member checks a passenger’s temperature, amid the new coronavirus outbreak, upon his arrival to Shalamcha Border Crossing between Iraq and Iran, February 20, 2020. REUTERS/Essam al-Sudani

“At present, the epidemic situation is still severe and complex, and prevention and control work is in the most difficult and critical stage,” President Xi Jinping said.

In South Korea, Catholic churches in Daegu and Gwangju have suspended services and other gatherings, while churches elsewhere saw declines in attendance on Sunday, especially among the elderly.

“If the situation gets worse, I think we’ll need to take more measures,” said Song Gi-young, 53, wearing a face mask at church.

The potential economic impact of the disease was prominent at a meeting of G20 finance ministers in Riyadh.

Xi highlighted the importance of fighting the epidemic in the capital Beijing, which has recently required people arriving from elsewhere in China to be quarantined at home for 14 days.

He said it would have a relatively big, but short-term impact on the economy and that Beijing would step up policy adjustments to help cushion the blow.

In Japan, where the government is facing growing questions about whether it is doing enough to counter the virus, authorities had confirmed 773 cases by early Sunday evening.

Most of them were from a cruise ship quarantined near Tokyo, the Diamond Princess. A third passenger, a Japanese man in his 80s, died on Sunday.

British authorities said four people evacuated from the ship had tested positive for the virus after being flown to Britain.