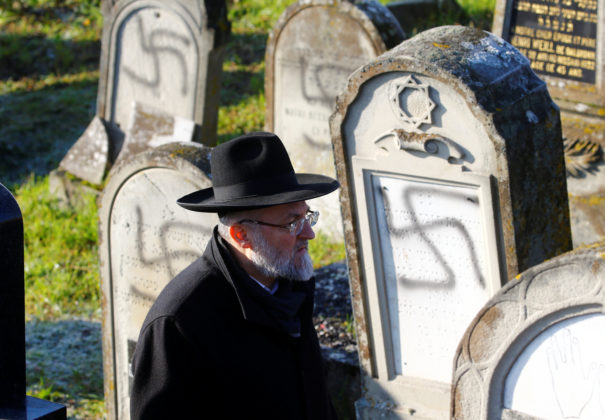 A man walks past graves desecrated with swastikas at the Jewish cemetery in Westhoffen, near Strasbourg, France, December 4, 2019. REUTERS/Arnd Wiegmann

JERUSALEM (Reuters) – The coronavirus crisis is stirring anti-Semitism around the world, fuelled by centuries-old lies that Jews are spreading infection, researchers in Israel said on Monday.

The findings, in the annual report on Anti-Semitism Worldwide by the Kantor Center at Tel Aviv University, showed an 18% rise in anti-Semitic incidents in 2019 over the previous year.

In the first few months of 2020, far-right politicians in the United States and Europe and ultra-conservative pastors have seized upon the health crisis and its resulting economic hardship to foster hatred against Jews, the researchers said.

“Since the beginning of the COVID-19 pandemic, there has been a significant rise in accusations that Jews, as individuals and as a collective, are behind the spread of the virus or are directly profiting from it,” said Moshe Kantor, president of the European Jewish Congress.

“The language and imagery used clearly identifies a revival of the mediaeval ‘blood libels’ when Jews were accused of spreading disease, poisoning wells or controlling economies,” he said during the report’s release.

Kantor said that as unemployment soars due to lockdowns to contain the coronavirus, “more people may seek out scapegoats, spun for them by conspiracy theorists”.

He called on world leaders to address the problem of growing extremism “already at our door”.

Severe and violent incidents against Jews worldwide rose to 456 in 2019 from 387 in 2018, and seven Jews were killed in anti-Semitic attacks last year, the report found.

In 2019, 122 major violent incidents against Jews were reported in Britain, followed by 111 in the United States, 41 in France and Germany and 33 in Australia, according to the findings.

Kantor said there had been a consistent rise in anti-Semitism over the least few years, especially online, and in mainstream society, politics and media.

He said the increased use of social media during the health crisis could facilitate the spread of conspiracy theories, “providing simplistic answers for the growing anxiety among the general public”.