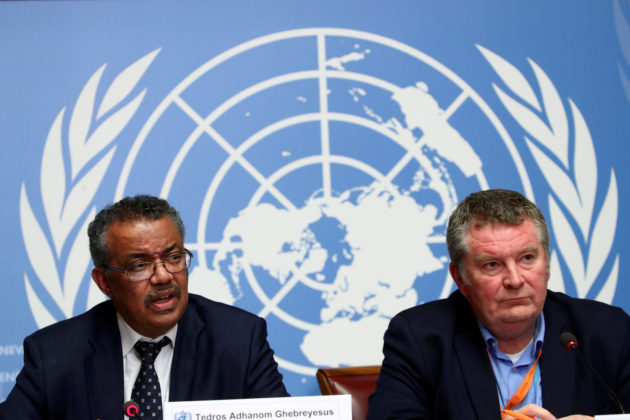 FILE PHOTO: Director-General of the World Health Organization (WHO) Tedros Adhanom Ghebreyesus speaks next to Michael J. Ryan, Executive Director of the WHO Health Emergencies Programme, during a news conference on the situation of the coronavirus at the United Nations, in Geneva, Switzerland, January 29, 2020. REUTERS/Denis Balibouse

By Julie Steenhuysen and Stephanie Nebehay

CHICAGO/GENEVA (Reuters) – A week ago, only two laboratories in Africa could diagnose the novel coronavirus that originated in China and is rapidly spreading around the world. As of Sunday, the World Health Organization (WHO) expected every nation in Africa to be able to diagnose the disease.

The rush reflects a global push for diagnostic capabilities, particularly in developing countries, in hopes of averting a global pandemic. But it is being slowed by a desperate need for virus samples necessary to validate the tests.

“Without vital diagnostic capacity, countries are in the dark as to how far and wide the virus has spread and who has coronavirus or another disease with similar symptoms,” WHO chief Tedros Adhanom Ghebreyesus told a news conference in Geneva on Monday.

As of early Tuesday, there had been 42,708 confirmed cases reported in China and 1017 deaths, as well as 319 cases in 24 other countries, including one death.

Most of the testing is being done by public health laboratories. But several companies including Thermo Fisher Scientific Inc, GenScript Biotech Corp and Co-Diagnostics Inc have developed tests and are taking steps to get them validated for clinical use.

Roche is distributing coronavirus tests developed by Tib Molbiol of Berlin for research use on some of its instruments while developing a test of its own. Abbott Laboratories also is working on a test.

WHO has activated a network of 15 referral laboratories that can support national efforts in confirming new cases, and has identified 168 labs globally with the technology to diagnose the virus. 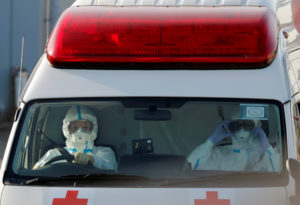 Technicians must be trained to run the tests locally to avoid delays associated with having to send them to centralized labs.

On Tuesday, WHO is convening a two-day meeting of hundreds of researchers and manufacturers to address the outbreak.

WORKLOAD ON LABS IS ‘EXTREME’

Researchers are also working to develop antibody tests that can tell whether someone has been exposed to the virus. They could help answer how broadly this virus has spread, and whether there are milder cases not being detected, Dr. Mike Ryan, head of the WHO emergency program, told reporters.

China appears to have adequate stock of the materials needed to perform diagnostic tests, but there is a limited number of trained technicians who can run them. “The workload on those labs is extreme,” Ryan said.

Outside of China, manufacturers are quickly developing tests based on the genetic code of the virus. Those tests still need to be validated with actual virus samples, for which access has been challenging.

Live isolation of the virus allows a huge advance in diagnostics and potential advances in therapeutics and vaccine development, Ryan said.

GenScript, which has offices in New Jersey and Nanjing, China, has developed a test available to researchers. It cannot be used as a diagnostic until it has been tested in hundreds of virus samples.

“In China, we couldn’t get to the samples directly because we don’t have a lab that can handle the virus,” said Hong Li, a GenScript scientist.

The company has sent its test kits to Chinese health officials to assess their validity. “Because other companies in China are also doing that, we don’t know when it will be our turn,” said Eric Wang, GenScript’s head of marketing.

Utah-based Co-Diagnostics on Monday said it has started shipping its test, which is available for research purposes, to clients. Chief Scientific Officer Brent Satterfield said last week that the company has been struggling to find clinical virus samples to validate the test for use as a diagnostic.

Thermo Fisher developed its tests based on the genetic code of the virus, and ran computer models to validate it.

The company has been providing its test to countries and health ministries with access to virus samples, said Thermo Fisher executive Joshua Trotta. “They will evaluate our kits and make a determination of what is the best test to deploy.”

Meanwhile, Thermo Fisher is scaling up production as countries prepare for more cases. Demand is “growing every day,” Trotta said.

(Reporting by Julie Steenhuysen in Chicago and Stephanie Nebehay in Geneva; Editing by Bill Berkrot)