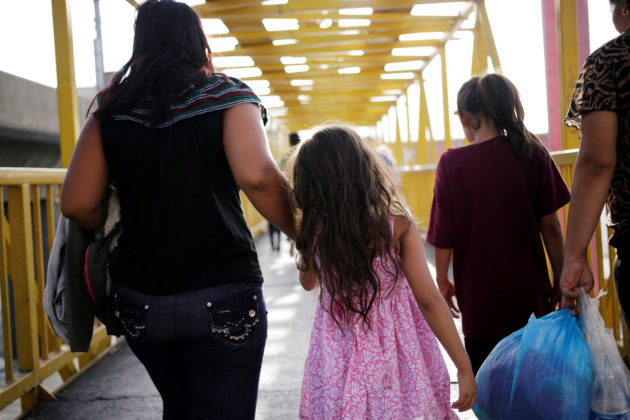 Central American migrants, returned from the U.S. to Nuevo Laredo in Mexico under the Migrant Protection Protocol (MPP) to wait for their court hearing for asylum seekers, are seen walking towards a shelter after arriving to Monterrey, Mexico July 31, 2019. Picture taken July 31, 2019. REUTERS/Daniel Becerril

MEXICO CITY (Thomson Reuters Foundation) – Central American migrants are being kidnapped, raped and trafficked in Mexico as they seek to enter the United States amid a migration crackdown, a medical charity said on Tuesday.

In Mexico’s Nuevo Laredo city – separated from the United States by the Rio Grande – almost 80% of migrants treated by Medecins Sans Frontieres (MSF) in the first nine months of 2019 said they had been victims of violence, including kidnapping.

“They’re treated as if they aren’t really people,” Sergio Martin, Mexico coordinator for MSF, told the Thomson Reuters Foundation. “They’ve suffered violence … and what they find on their journey is more violence.”

Mexico has ramped up efforts to stop Central American migrants, often fleeing violent crime and poverty, reaching the U.S. border under pressure from President Donald Trump who threatened to put import tariffs on its goods.

It has deployed the National Guard to stop migrants crossing northwards and increased detentions and deportations.

The United States has sent 57,000 non-Mexican migrants back to Mexico to await their U.S. asylum hearings, restricted asylum criteria and limited the number of claims it receives daily at each port of entry.

In September, 18 of 41 patients in Nuevo Laredo who had been sent back to Mexico to wait for U.S. asylum processing told MSF they had recently been kidnapped.

The U.S. Department of Homeland Security did not immediately respond to a request for comment.

“We think that as a direct result of many of these policies there are people who are suffering more violence,” said Martin.

“It’s easier for them to fall into human trafficking networks or into extortion networks, and no one look for them.”

MSF found 78% of almost 3,700 patients in Mexico who sought mental health care in 2018 and 2019 showed signs of exposure to violence, including assault, sexual violence and torture.

Some patients said they had been kidnapped in Mexico for long periods for forced labour, sexual exploitation or recruitment to work for criminal groups.

Almost one in four female migrants told MSF they had experienced sexual violence on their journeys.

The MSF data was based on some 26,000 health consultations with migrants in 2018 and 2019, testimonials and a survey.