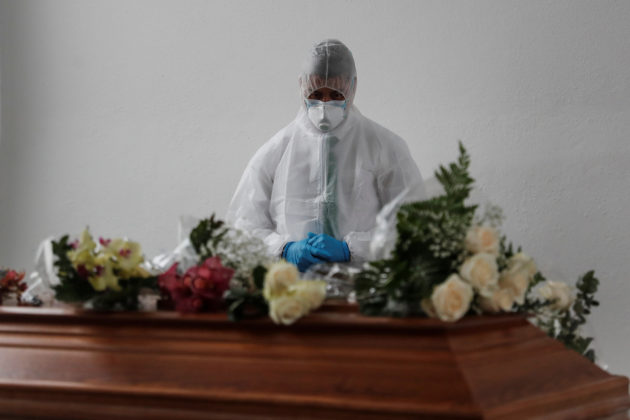 A funeral worker look at the coffin of a person who died from the coronavirus disease (COVID-19) during the COVID-19 pandemic in Cascais, Portugal, February 9, 2021. REUTERS/Pedro Nunes

LISBON (Reuters) – Standing next to the sealed coffin of yet another COVID-19 victim in Portugal, funeral parlor worker Carlos Carneiro wept as the bereaved family played a record of a traditional fado song as a final goodbye.

Carneiro, 37, has been in the undertaking business for two decades helping people cope with loss, but never felt as affected by sorrow and fear as now.

Portugal fared better than others in Europe in the first wave of the pandemic in March-April, but the new year brought a devastating surge in infections and deaths, overwhelming the health service and funeral homes.

More than 14,700 people have died of COVID-19 in Portugal, with cumulative infections since the start of the pandemic at nearly 775,000.

“I have never felt this emotional, with so many consecutive funerals,” Carneiro told Reuters in a quavering voice outside the crematorium where the body of 77-year-old Matilde Firmino was turned into ashes.

Due to coronavirus rules in place to reduce the risk of contagion, funeral homes like Carneiro’s Funalcoitao near Lisbon had to quickly adapt.

Workers must wear protective gear from head to toe, bodies are placed inside white plastic bags and then in a coffin, without embalming or makeup.

Families are rarely able to see the deceased before they are buried or cremated, and Firmino’s daughter was at one point worried if it was really her mother inside the coffin.

A priest blessed the coffin in a short service held outside as family and friends sheltered from the pouring rain. “I ask God to free us from this pandemic we are living,” he said.

Carneiro said he always seeks to honor the lives of the dead, but not being able to give families the full closure they seek is taking a toll on his well-being.

“These people are not numbers…People sit on their sofas and worry about (coronavirus) numbers, but we see people and their families. We have to deal with the drama,” Carneiro said.

His brother Alvaro, 44, said January, when Portugal reported almost half of all its COVID-19 deaths since the start of the pandemic, was the hardest month in his 24 years in the funeral business.

“We are scared of being infected, of infecting our family members at home,” he said at their family-run funeral home, which on Tuesday alone organized six services. “There’s fear.”

Funeral business associations have urged Portuguese authorities to vaccinate the sector’s around 5,000 workers as soon as possible.

“We are on the frontline so we should be considered a priority for vaccination but according to the news we are seeing there are not enough shots for everyone,” Alvaro Carneiro said. “We will have to endure this a little longer.”

A July 2020 article by two public health researchers said high death rates, restrictions, a fear of being infected and worries about their families’ wellbeing could affect funeral workers’ mental health, especially in the longer run after the daily pressure subsides.