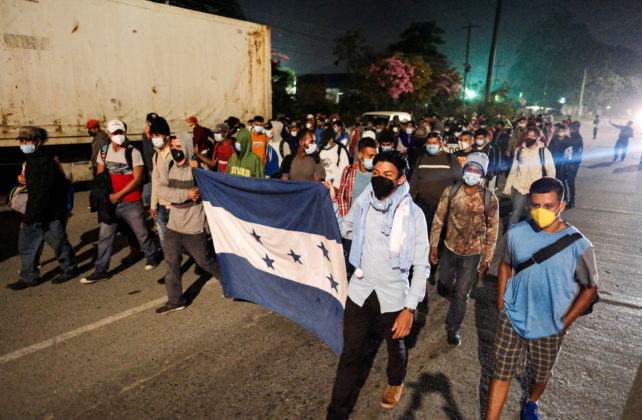 Hondurans hold their national flag as they take part in a new caravan of migrants, set to head to the United States, in San Pedro Sula, Honduras January 14, 2021. REUTERS/Yoseph Amaya

By Sofia Menchu and Lizbeth Diaz

GUATEMALA CITY (Reuters) – As the first groups from Central America headed toward the Guatemalan border on Thursday as part of a caravan aiming to reach the United States, regional governments are using coronavirus measures as the latest tool to curtail migration.

The tightening by Mexican and Central American authorities, coupled with pandemic-linked U.S. border restrictions in place since March, represent a sweeping effort to use public health regulations to deter movement along one of the world’s busiest migration routes at a time when a fierce second wave of coronavirus is sweeping the region.

In Mexico, the pandemic has killed nearly 137,000 people and the capital’s hospitals are spiking with COVID-19 cases.

This week’s caravan, slated to depart Honduras on Friday, would be the first of the year.

Yet, Central American and Mexican authorities are stepping up efforts to stop migrants well before the U.S. border, which will likely be a relief for Biden, whose aides have privately expressed concerns about the prospect of a growing numbers of migrants seeking to enter the United States in the early days of his administration.

On Thursday, Guatemala cited the pandemic in order to declare emergency powers in seven Guatemalan border provinces migrants frequently transit through en route to the Mexican border. The measures limit public demonstrations and allow authorities to disperse any public meeting, group or demonstration by force.

Honduras and Guatemala have also announced they will deploy thousands of soldiers to preemptively stop caravan members not complying with health regulations.

“We barely have food to eat, how do they think we are going to pay for these (coronavirus) tests?” said 29-year-old Ulises Santos from El Salvador, who is hoping to join the caravan.

Central America is reeling from economic crises, high rates of violence, and the devastating fallout of two major hurricanes that battered the region in November.

Migration experts say the public health measures are part of a broader effort by Central American and Mexican authorities, under pressure from Washington, to stop migrants before they reach U.S. territory.

“The goal (of local police) is to stop migrants, whether through repression, threats, extortion, or requirements to present a COVID-19 test.”