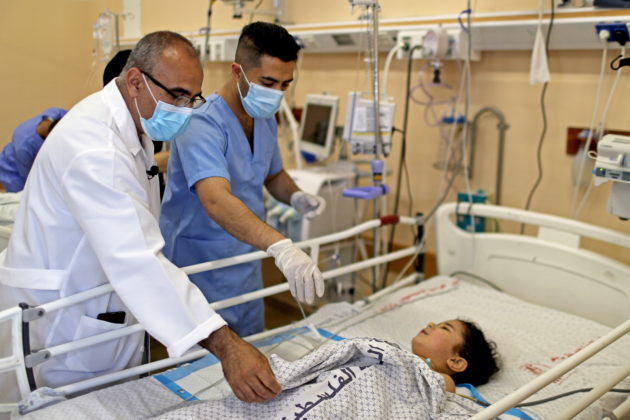 GAZA (Reuters) – Gaza’s hospitals were already struggling to cope with the COVID-19 pandemic before the conflict with Israel erupted last week. Now, medics say, they are being stretched further.

“The Ministry of Health is fighting on two fronts in the Gaza Strip – the coronavirus front and the other front, which is more difficult, is the injuries and the wounded,” said Marwan Abu Sada, the director of surgery in Gaza’s main Shifa hospital.

More than a week into fighting, with Palestinians pounded night and day by airstrikes and Israelis racing for refuge from rockets as sirens wail, Gaza’s doctors are battling to keep pace.

At Shifa, the biggest health facility among the 13 hospitals and 54 clinics serving the crowded enclave’s 2 million people, the number of intensive care beds has been doubled to 32 as the toll of those wounded from the conflict mounts.

Like the rest of the system, the 750-bed hospital faced shortages of medicines and equipment before fighting erupted on May 10 – blamed by medics on a blockade led by Israel and backed by Egypt, which shares a border with Gaza. Israel says its measures aim to stop arms reaching militants. “The list of essential medications and medical disposables suffered an acute shortage,” Abu Sada said.

It’s not just medicines in short supply. Fuel for generators that power Gaza’s hospitals – with main’s power too intermittent to be relied on – is also running out.

Israel says its blockade does not aim to stop medicines or other humanitarian supplies, and any shortages are the result of actions by Hamas, the Islamist group that has run Gaza since 2007, when the blockade was imposed.

“Hamas constructed a network of underground terror tunnels in Gaza underneath the homes of Palestinians, using funds meant for their health & welfare to expand Hamas’ terror machine instead,” Israel’s Foreign Ministry said on Twitter Monday.

Hamas has rejected the accusation.

Palestinians say 201 people have been killed in Gaza since the fighting started, with hundreds more hurt, including those wounded by shrapnel or injured by collapsing buildings.

Israel has reported 10 dead in the rocket salvoes, with many more injured, some directly by the blasts and others when dashing to safety. Some are in a critical condition.

“We have a very bad time over here,” said Racheli Malka, an Israeli living in Ashkelon, a city north of Gaza repeatedly hit by rockets. “I hope it will finish fast.”

Nearby, Israelis celebrated the Jewish festival of Shavuot in a synagogue that had a hole caused by a rocket strike.

The Israeli military said Hamas – regarded by Israel, the United States and European Union as a terrorist group – and others militants had fired about 3,150 rockets in the past week.

Sacha Bootsma, the head of the World Health Organization in Gaza, said COVID-19 had strained the enclave’s struggling system.

“Before COVID, the health system could be categorized as fragile because it has very old equipment, old buildings, a shortage of properly trained health staff and, of course, a chronic shortage of essential medicines,” she said.

While Israel has rolled out one of the fastest vaccination programs in the world, fully inoculating about 55% of its 9.3 million people, Gaza received about 110,000 doses, or enough for 55,000 people, health officials say, to be distributed among one of the most densely populated areas in the world.

One ward at Shifa, still marked “Corona Isolation Department”, has had to be turned into an intensive care unit for those injured in the conflict.

“We require more urgent support from international and relief institutions,” said Ashraf Al-Qidra, spokesman for the ministry of health, calling for medicines and ambulances.

For those living near Shifa hospital, the sound of ambulances wears on their already shattered nerves. “As long as we hear sirens we know it is not over yet,” said Karam Badr, 57.

“The resilience of the health system is remarkable,” she said.