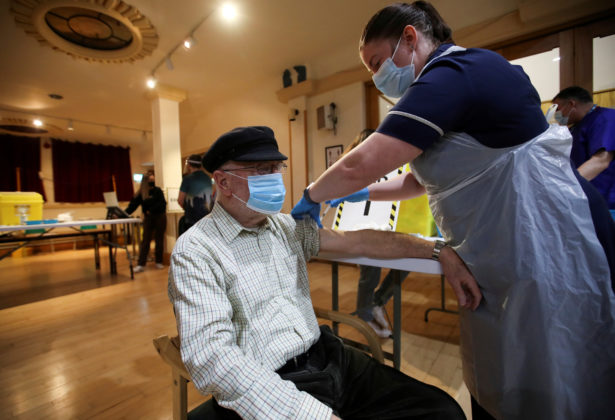 LONDON (Reuters) – A coronavirus variant first found a few months ago in Britain is now “taking over” and causing 98% of all cases in the UK, the scientist leading the country’s variant-tracking research said on Thursday.

Sharon Peacock said the UK variant, known as B.1.1.7, also appears to be gaining a firm grip in many of the 100 or so other countries it has spread to in the past few months.

“It’s around 50% more transmissible – hence its success in really taking over the country,” said Peacock, director of the COVID-19 Genomics UK (COG-UK) consortium of scientists monitoring mutations in the coronavirus.

“We now know that it has spread across the UK and causes nearly all of the cases of COVID-19 – about 98%,” she told an online briefing for Britain’s Royal Society of Medicine.

“It appears to be the case that the other variants are not getting a foothold in this country.”

The B.1.1.7 variant, first detected in September 2020, has 23 mutations in its genetic code – a relatively high number of changes – and is thought by experts to be 40%-70% more transmissible than previously dominant variants.

“There is a small increase in the likelihood of death from the variant,” she said.

The World Health Organization says B.1.1.7 is one of several “variants of concern,” along with others that have emerged in South Africa and Brazil. The variants are mutant versions of the SARS-CoV-2 virus that causes COVID-19, which has already killed more than 2.7 million people in the pandemic.

B.1.1.7 has spread to about 100 countries, according to WHO data, and some of those, including France, Denmark and the United States, have reported swift rises in the proportion of their COVID-19 cases being caused by it.

Peacock said evidence from the UK suggests B.1.1.7. is likely to become dominant elsewhere too.

“Because of its transmissibility, once it’s introduced, it does have that advantage over other circulating variants – so it is the case that B.1.1.7 appears to be travelling around the world and really expanding where it lands.”

Public Health England (PHE) also said on Thursday that a new coronavirus variant had been identified in the UK in two people who had recently been in Antigua. PHE said it shared some traits of other variants but was not classed as concerning for now.