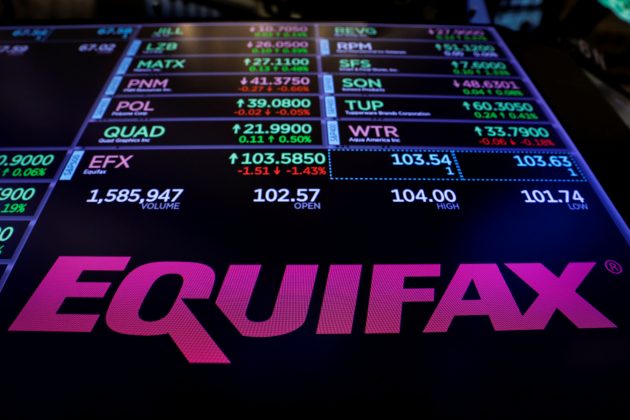 FILE PHOTO: The logo and trading information for Credit reporting company Equifax Inc. are displayed on a screen on the floor of the New York Stock Exchange (NYSE) in New York, U.S., September 26, 2017. REUTERS/Lucas Jackson

Top executives from the three major credit reporting agencies – Equifax Inc, Experian Plc and TransUnion had to defend their business models before skeptical lawmakers who appeared eager to order changes to the sector following Equifax’s massive data breach, disclosed in 2017.

“Our nation’s consumer credit reporting system is broken,” said Representative Maxine Waters, chairwoman of the House Financial Services Committee. “I&rsquo;m troubled to the point where I do think that we need to start thinking about how we reimagine it and rebuild it from the ground … We will be introducing legislation.”

Waters has a draft bill that would limit the reach of such credit reports, shorten the time adverse information remains on consumers’ records, and make it easier for consumers to dispute errors on their reports.

Several Democrats made clear they were dissatisfied with the current state of the country’s credit reporting, arguing consumers lack control over their own data.

The panel’s top Republican, Representative Patrick McHenry, agreed the industry was in need of a makeover. However, he emphasized a desire to see more companies compete with the three largest agencies.

“What I see here is an oligopoly,” he told executives. “I don&rsquo;t see that vibrant competition which is needed for these agencies to actually help consumers.”

The massive data breach disclosed by Equifax in 2017, where a cyber attack exposed the personal data of roughly 148 million people, has driven calls from Washington for changes to the industry.

Legislation beefing up protections around consumer data is seen by analysts and lobbyists to be a rare area of common ground in the current Congress, where Democrats control the House and Republicans control the Senate.

Waters’ Senate counterpart, Banking Chairman Mike Crapo, has said legislation addressing the collection and protection of personal data is one of his top priorities this year. He is currently soliciting input on how consumers could retain more control over their personal information.

For their part, credit reporting agency executives told lawmakers they were working to address consumer concerns and bolster their cybersecurity to guard against future breaches.

“Consumers trust and expect that their credit reports contain the most accurate and complete data possible, and lenders rely on that information to help millions of consumers obtain the right loans at the right time,” said Equifax CEO Mark Begor in prepared testimony.