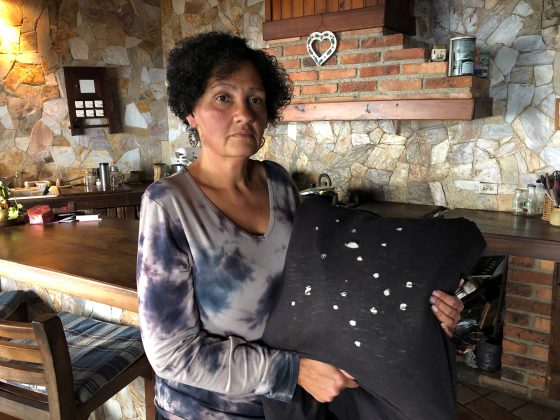 Eugenia Vicuna holds a cushion made from the t-shirt that, she says, her son was wearing at the moment of his detention at their house in El Junquito, Venezuela, February 7, 2019. Picture taken February 7, 2019. To match Insight VENEZUELA-POLITICS/EVIDENCE. REUTERS/Angus Berwick

EL JUNQUITO, Venezuela (Reuters) – Local opposition leader Jose Rengel has spent almost five weeks in a cramped detention cell on the outskirts of the Venezuelan capital Caracas, after a single witness accused him of leading a riot that burned down a public building.

Rengel was arrested together with eight other men on January 24 after the witness – a member of the ruling Socialist Party – told soldiers that the 59-year-old had sacked shops and “completely destroyed” a public transport office using Molotov cocktails, according to a National Guard report filed one day later.

The detained men, who are described by their families as opposition sympathizers, now face charges of arson, theft, and illegally carrying weapons, which could lead to 10-year jail sentences. The men all deny taking part in the protest, according to statements they gave to a court and their lawyers.

A visit to the neighborhood of El Junquito, a string of poor settlements atop a ridgeline west of the teeming Venezuelan capital, shows the public transport building still stands. The one-room office, its interior decorated with a portrait of former president Hugo Chavez, is providing services as normal and shows no sign of significant damage.

The National Guard said in its report that they found no weapons on Rengel. They said they seized two shotguns from two other men, both of whom, via their lawyers, denied having them. In addition, the men’s families and neighbors said none of the men were near the transport office at the time of their arrest, contradicting the National Guard’s report that they were detained during the demonstration just after 7 p.m.

The men all remain in custody.

The witness, Jesus Vielma, told Reuters he stood by his testimony and said the men were “a band of criminals.” The lieutenant who wrote the report, Jorge Acevedo, did not respond to Facebook messages and the National Guard did not respond to requests to comment on his behalf. Rengel’s lawyers said he denied all charges.

The arrest of the nine men here in El Junquito is part of&nbsp;what some civil rights groups estimate at almost 1,100 arrests by President Nicolas Maduro’s government since opposition leader Juan Guaido invoked the constitution and assumed a rival presidency on January 23, with the backing of the United States.

The government has denied it takes political prisoners or fabricates evidence, and says the crackdown is aimed at clearing out criminals.

Interviews by Reuters with 20 people in El Junquito, a dozen of whom said they were with the men at the time, plus a review of court records and a National Guard report, contradict the National Guard’s official account that they arrested the men during a violent protest.

Their families and lawyers told Reuters they believe the men were arbitrarily detained, based on the lack of evidence to support the charges against them.

Some 120 locals have signed a written petition backing the family’s version of the events.

The National Guard did not respond to requests to comment about the discrepancies between its report and the witnesses interviewed. The Information Ministry, which handles all media inquiries for the government, did not respond either.

With Maduro under mounting pressure, the arrests, along with some 40 extrajudicial killings by security forces, have spread fear through poor areas, limiting further demonstrations, local politicians and NGOs say.

“They’re now going after the little guy,” said Javier Torres, a colleague of Rengel, who is head of the opposition Democratic Action party in El Junquito. “It’s to try to silence the voices of leaders in communities that have protested.”

A KNOCK ON THE DOOR

Rengel’s wife said he was preparing dinner for the family when several dozen masked soldiers arrived at the house on motorbikes at 9:30 p.m.

“When they knocked, my husband opened the door without realizing what he would find,” said his wife, Onoris de Rengel, 59. “The soldiers entered shouting ‘Who is Jose Rengel? Who is Jose Rengel?’ They went to the kitchen and ordered us to the ground. They asked him where were the weapons.”

The soldiers left with Rengel, who they beat hard enough to bruise his ribs, the family and their lawyer said. Photos of the family home, taken by neighbors and seen by Reuters, appear to show it ransacked after a raid, with furniture overturned and clothes strewn across the floor.

Venezuelan legal aid group Penal Forum, which is representing other people detained in the area, said the arrests come amid a political crackdown since dozens of countries recognized Guaido as the legitimate head-of-state. Maduro accuses Guaido of leading a U.S.-orchestrated coup to oust him.

Penal Forum says the 1,069 politically motivated arrests between January 21 and January 31 are the most since it began keeping records almost 18 years ago. Most cases involve planted evidence and invented circumstances to justify detentions, its director, Alfredo Romero, said.

The government began another crackdown on Saturday when troops at the border blocked humanitarian aid convoys sent by the opposition from Colombia and Brazil. Penal Forum says it has recorded over 60 arrests over the weekend.

The Information Ministry did not respond to requests to comment about Penal Forum’s accusations. The Supreme Court’s president, Maikel Moreno, said in January that judicial officials carry out “invaluable work with professionalism, ethics and quality.”

“SCOURGES OF THE AREA”

Locals in El Junquito said there was a small opposition protest on the evening of January 24, when a few dozen people blocked the main road and burned tires close to the Cacique Tiuna transport office.

At about 7 p.m., Jorge Acevedo, the young National Guard lieutenant, received a call at his outpost, some 4 km (2.5 miles) away, according to his report.

The caller, Jesus Vielma, head of a local council for the ruling Socialist Party, told Acevedo that Rengel was leading a riot, the report shows. The National Guard withheld Vielma’s identity in the report, but he confirmed to Reuters he was the witness.

Acevedo said when he and other soldiers reached the scene, protesters attacked them with petrol bombs and rocks. Acevedo wrote that they arrested Rengel and eight others after cornering them, describing them as “the most violent ones there.”

An employee at the transport office said she was still there that evening at 7 p.m. and protesters only began throwing projectiles an hour later. She said protesters stole several desks and a petrol bomb was thrown against the building, forcing them to re-paint the walls.

In a statement given at the National Guard outpost that evening, Vielma said that he saw Rengel carrying a shotgun and identified the detained men as those who sacked the office: “They are the scourges of the area.”

Vielma, in an interview with Reuters, praised the National Guard for bringing order to the community. “We cannot accept a band of criminals. They have to accept the consequences,” he said.

During a January 26 hearing at a Caracas court, the prosecutor provided no evidence beyond Vielma’s testimony and the two shotguns he said the National Guard seized but emphasized the “magnitude of the damage,” court documents show.

The judge remanded the men in custody for 45 days while the investigation continues.

Some families of the men detained in El Junquito say the men were opposition sympathizers.

“There were some 40 motor-bikes driving up the road. They stopped us, grabbed him and pulled him onto a bike,” said 19-year-old Yosneilis Calzadilla, the girlfriend of one of the detained men, Jhon Mijares. “They didn’t tell us anything.”

The nine men are jailed inside a 1 meter by 7 meter cell with dozens more detainees, according to their families, lawyers and court documents.

Eugenia de Vicuna said she has only been able to see her son, Enmanuel, twice, for six minutes in total, since soldiers shot the 21-year-old student at point-blank range with rubber rounds while he was returning home from shopping that evening.

The rounds left 20 open wounds on his back which have still not been treated, according to his family and a photo supplied by his lawyer.

On January 29, a judge, in a written ruling, ordered the National Guard to transfer Vicuna and the other eight men to a hospital. But his family and relatives and lawyers for the other men say they remain in the cell.

The National Guard and Information Ministry did not respond to requests to comment on why they remain there.