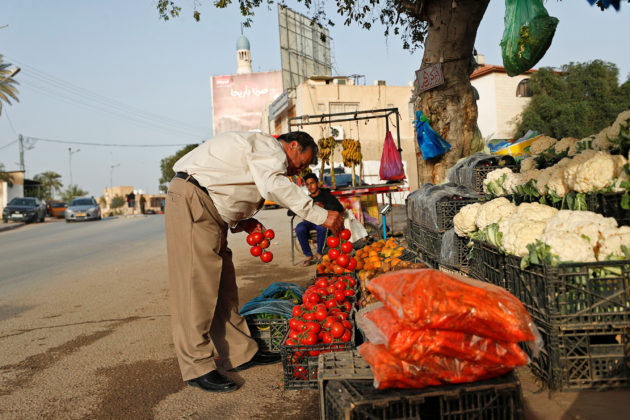 JERICHO, West Bank (Reuters) – As a Palestinian living in Jerusalem, Ismail Daiq is used to negotiating the dividing lines between communities: the daily commute to his Jordan Valley date farm involves crossing a checkpoint on his way home.

Now the coronavirus pandemic has created another fault line for him to navigate: the stark difference between access to vaccines in Israel and in the Palestinian territories.

Living within the Israeli health system, Daiq, 62, has already received his second COVID-19 vaccination in a country that is a leader in the world’s inoculation drive.

But his Palestinian siblings and 95-year-old mother in Jericho are still awaiting a vaccine rollout that has only just begun under the Palestinian Authority, which exercises limited sovereignty in the Israeli-occupied West Bank.

Daiq is eligible for vaccination because he became a Jerusalem resident two decades ago when he married a woman from the city.

The rest of his family, friends and employees do not qualify, because they only have West Bank identity papers that do not let them pass through the Israeli checkpoints that control entry to the city.

So when the date farmer travels each day into the Palestinian territories, he is uncomfortably aware that while he feels safe, his loved ones are still at risk from the virus.

“I feel guilty, I feel very sad, because I want all my family safe,” Daiq told Reuters.

“When you see that you can get these services, the vaccination, and all of the family, they can’t get this vaccination, you feel that there is a difference between you and your family.”

Although Israel and the Palestinian Authority coordinate on security issues, political relations have foundered. Negotiations last broke down in 2014.

In January, the Palestinian Foreign Ministry accused Israel of ignoring its duties as an occupying power by not including Palestinians in the West Bank and Gaza Strip in their inoculation program.

Israeli officials have said that this is the job of the Palestinian authorities.

While Israel has so far vaccinated a third of its 9 million citizens, the Palestinian Authority received its first batch of 2,000 vaccines – supplied by Israel – on Monday. West Bank health workers received the first shots.

Daiq said he tried to avoid the subject with his family, because his mother kept asking him when she would be inoculated.

His brother Ibrahim, 60, said that he wished good health to “every person on this land” but that there was a sense of unfairness among Palestinians.

“Because of this, my natural rights as a human being, me and the rest of the people living in the West Bank and Gaza, considering we are a country living under occupation, we should also have the right to benefit from this vaccination.”