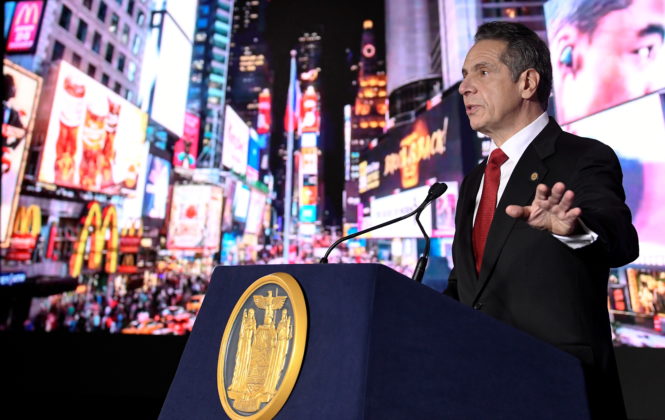 In his State of the State address, Cuomo gave the outlines of his plan, which he said he would detail further in coming days. They are set to include more on Cuomo’s previously flagged proposals to employ online sports betting and recreational marijuana to help close a $15 billion budget deficit.

Cuomo also talked about beating COVID-19 and vaccinating at least 70% of the 20 million New Yorkers.

“We will win the COVID war and we will learn from it. We are New York tough,” Cuomo said.

Reeling off a series of proposals aimed in part at jobs creation, Cuomo described a ‘Medical Supplies Act’ to ensure the sort of vital public health materials like face masks and gowns that were in short supply last spring when New York was the epicenter of the coronavirus pandemic. New York, which last year scrounged and scrambled for supplies largely made in China, would purchase first from its own manufactured supply, Cuomo said.

Improved transportation was also in the pipeline, he said.

“We will commence the most aggressive construction and transportation development program in the United States of America. New air, road and rail systems, upstate and downstate, more affordable housing and more economic development to create jobs, jobs and more jobs,” Cuomo said.

Cuomo said he would seek to eliminate racial and social inequities through such plans as affordable broadband connections, eliminating healthcare premiums, and converting unused commercial space into inexpensive housing.

Cuomo also vowed to expand voter access, an issue at the center of a national debate over the future of democracy in the United States. The Democratic governor’s proposals include adding time for early voting, broadening availability of absentee ballots, and speeding up vote counting.

Cuomo praised New Yorkers for supporting one another through the COVID-19 pandemic, citing their unity in a nation that has been deeply divided by politics during Trump’s term.