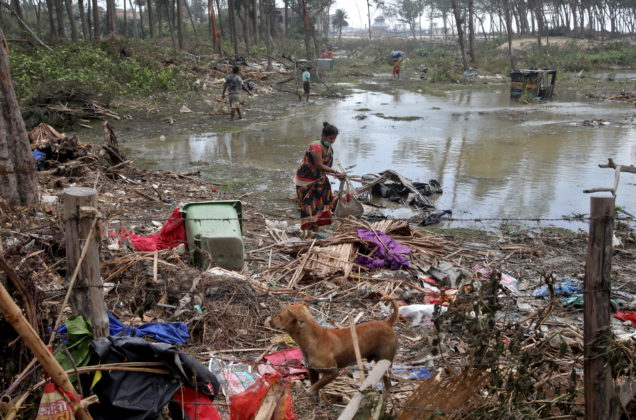 A woman salvages her belongings near her damaged hut following Cyclone Yaas in Digha, Purba Medinipur district in the eastern state of West Bengal, India, May 27, 2021. REUTERS/Rupak De Chowdhuri

KOLKATA, India (Reuters) – More than 150,000 people were left homeless in the aftermath of a cyclone that unleashed storm surges in eastern India and Bangladesh, officials said on Thursday, with heavy rains hampering relief work in some low-lying coastal areas.

At least five people were killed in the two countries after Cyclone Yaas moved inland from the Bay of Bengal on Wednesday, packing gusts of up to 140 kph (87 mph) and whipping up tidal surges in India’s West Bengal state and neighboring Bangladesh.

Indian officials said the storm had weakened into a depression after hitting the coast but heavy rain poured down in parts of West Bengal, where there was fresh inundation of sea water along some coastal villages on Thursday.

In West Bengal’s Sundarbans delta, which stretches into Bangladesh, at least 25,000 homes, many of them traditional mud houses, had been destroyed, leaving 150,000 people homeless, Hazra said, citing preliminary estimates.

The storm, the second to hit India in a week, arrived as the country grapples with a deadly second wave of coronavirus infections that has stretched the healthcare system to breaking point.

Some 500,000 people were sheltered in relief camps in West Bengal and officials said they had taken steps to reduce the risk of a potential spread of the virus.

People are being tested for coronavirus using the rapid antigen test and anyone who tests positive would be shifted to safe homes set up in government offices and schools, he said.

Authorities in Bangladesh reported flooding of villages due to torrential rains and tidal surges. Three people were dead, two by drowning and a third who was hit by a tree, an official at the Disaster Management Agency said.

“I have never seen a tidal surge rising to this level. It flooded many villages and washed away houses. Many people are marooned,” said Humayum Kabir, an official in the coastal district of Khulna.

Elsewhere on the sub-continent, Nepal was bracing for floods in its plains and landslides in the hills as heavy rains have lashed the Himalayan country since Wednesday and were forecast to last till Saturday.