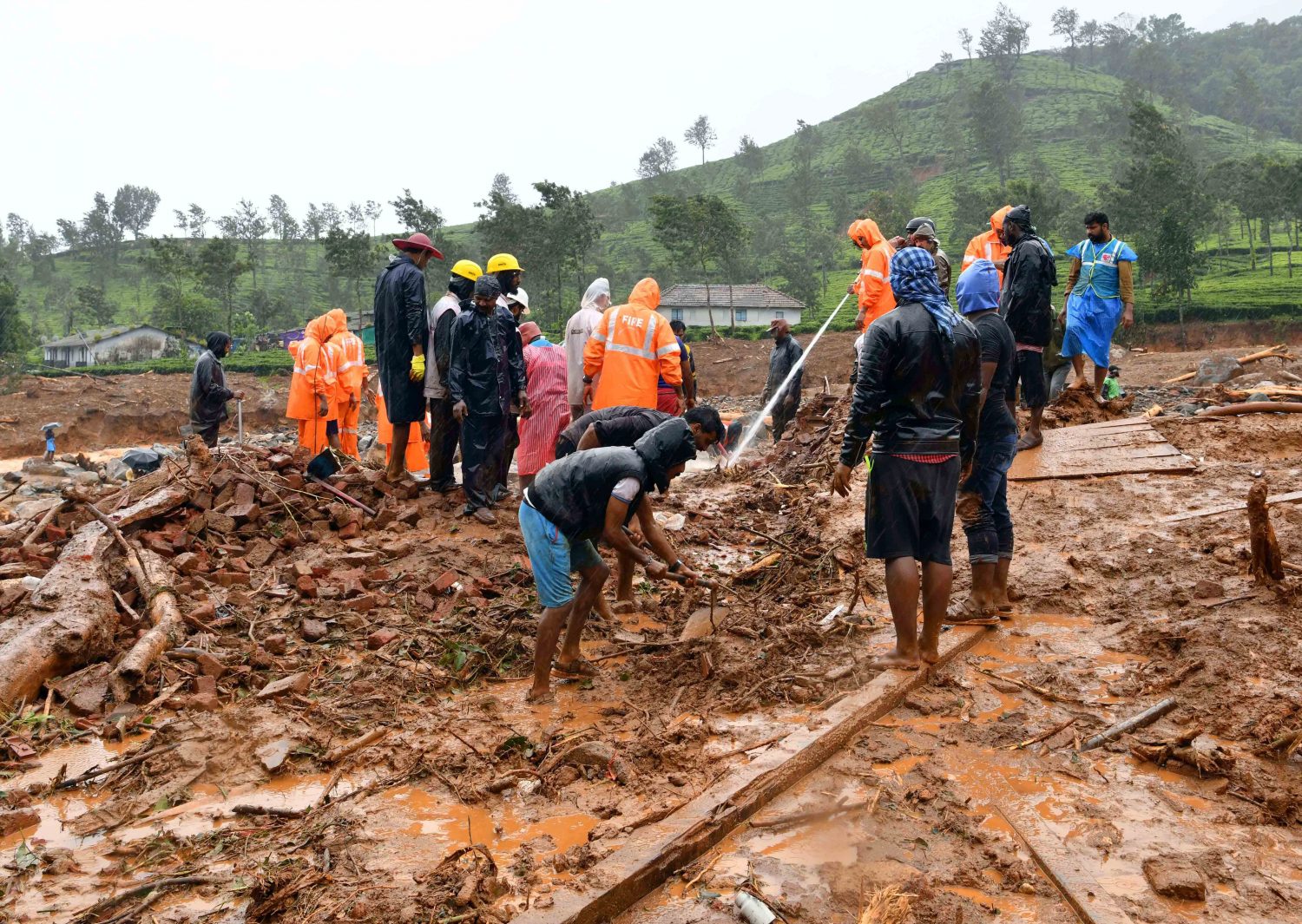 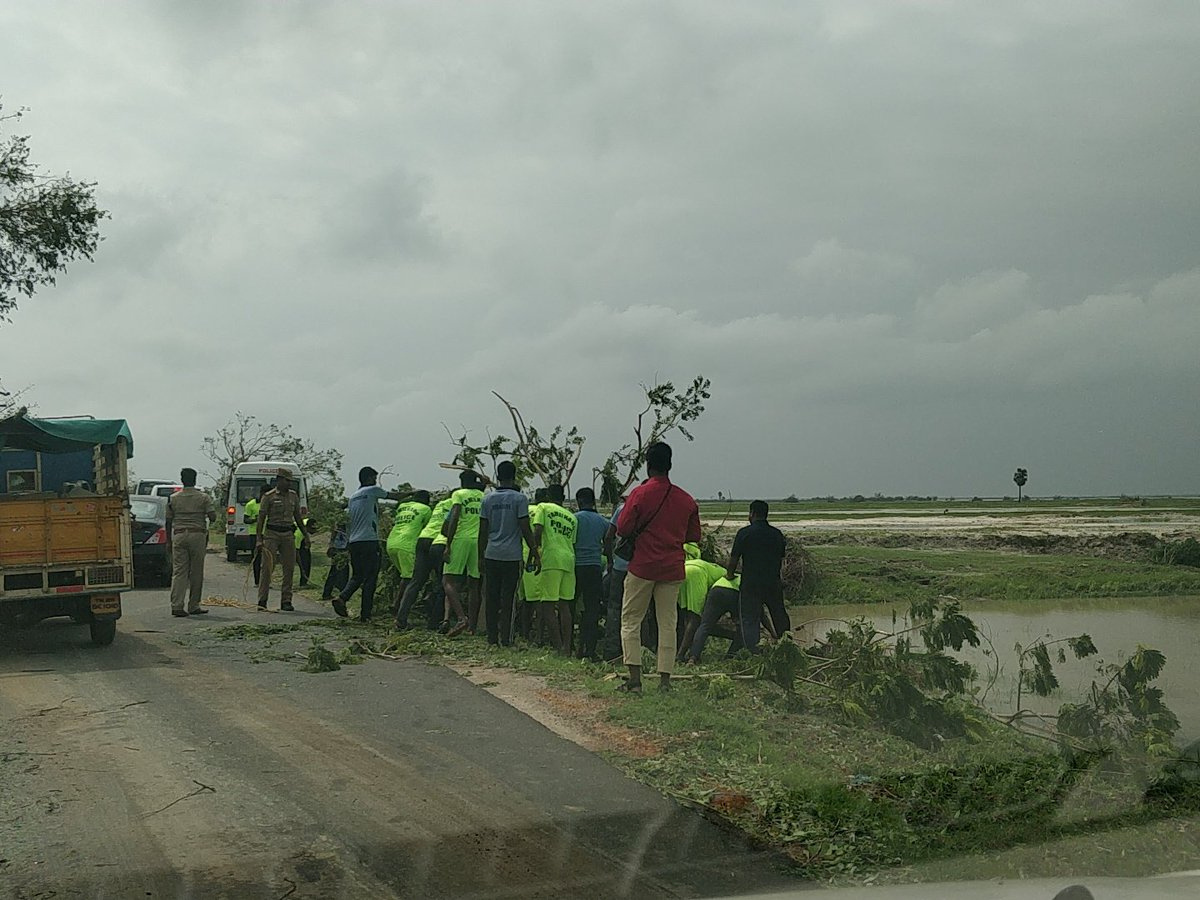 NEW DELHI (Reuters) – A cyclone made landfall in the southern Indian state of Tamil Nadu on Friday, killing at least 11 people, uprooting trees and knocking down electricity poles after more than 80,000 people were moved out of its path to safety, officials said. 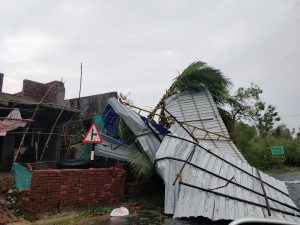 The aftermath of cyclone Gaja is seen in Tamil Nadu, India November 16, 2018 in this picture obtained from social media. SHABBIR AHMED/via REUTERS

Cyclone “Gaja” made landfall in the early hours of Friday but then weakened as it moved inland, K. J. Ramesh, director general of the state-run India Meteorological Department, told Reuters.

Eleven people were known to have been killed, said an official from the Tamil Nadu State Disaster Management Authority.

The state government has set up more than 470 relief camps and had evacuated more than 80,000 people from their homes in vulnerable areas, said the official who declined to be identified as he is not authorized to speak to media. 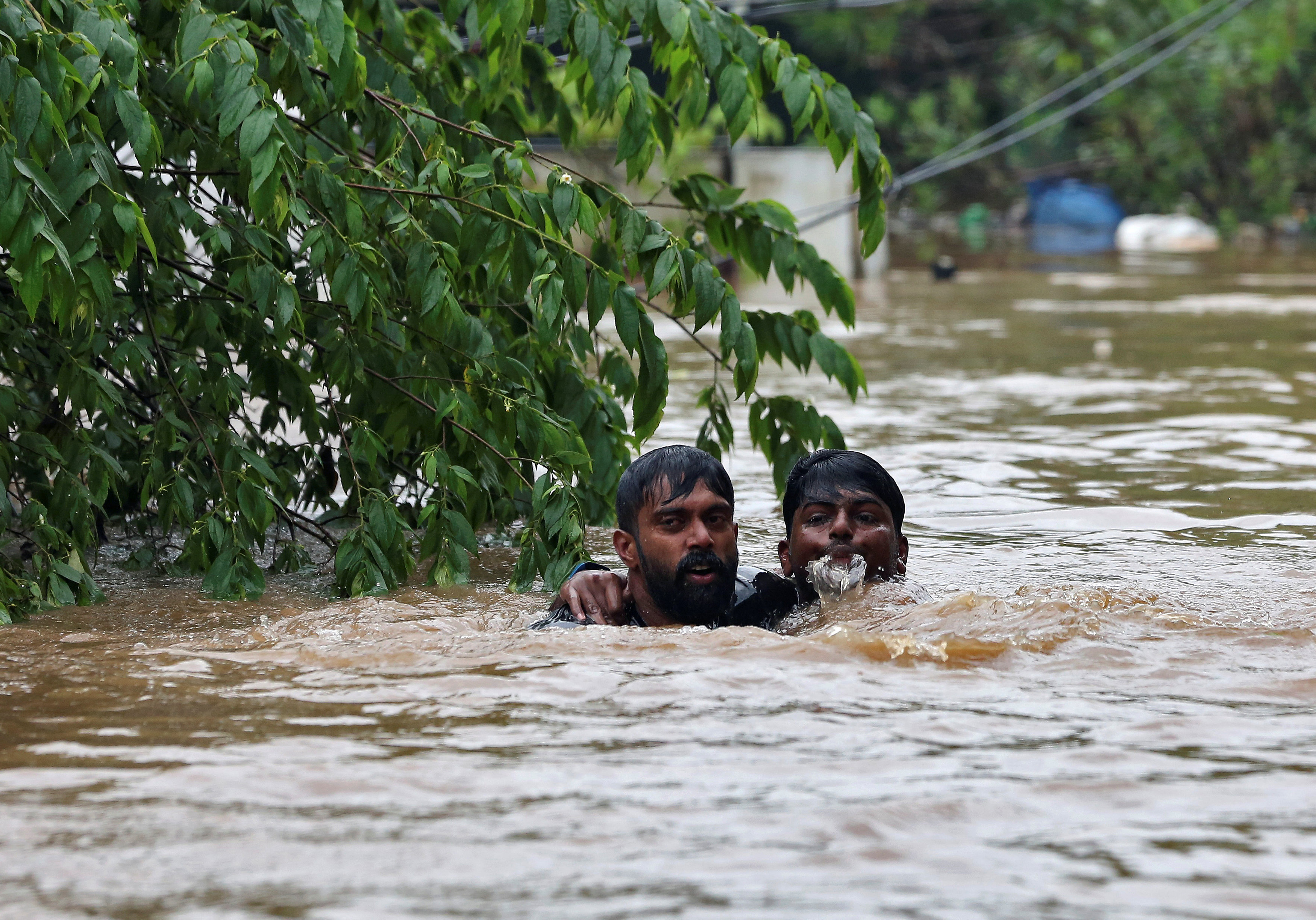 By Sivaram Venkitasubramanian and Gopakumar Warrier

KOCHI/BENGALURU, India (Reuters) – The worst floods in a century in the Indian state of Kerala have killed 164 people and forced more than 200,000 into relief camps, officials said on Friday, with more misery expected as heavy rain pushed water levels higher.

Prime Minister Narendra Modi is due to visit the southwest state later on Friday and its chief minister said he was hoping the military could step up help for the rescue effort, which is already using dozens of helicopters and hundreds of boats.

“I spoke to the defense minister this morning and asked for more helicopters,” Chief Minister Pinarayi Vijayan told a news conference in the state capital, Thiruvananthapuram, adding that he planned to send 11 more helicopters to the worst-hit places.

“In some areas, airlifting is the only option … thousands are still marooned,” said Vijayan.

The floods began nine days ago and Vijayan said 164 people had been killed – some in landslides – with about 223,000 people forced into 1,568 relief camps.

A Reuters witness on board a relief helicopter in Chengannur town in the south of the state said people stranded on roof tops were seen waving desperately at navy aircraft.

“The town looked like an island dotted with houses and cars submerged in muddy flood waters and downed coconut trees,” said the witness. 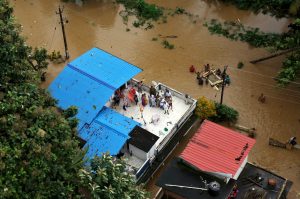 People wait for aid on the roof of their house at a flooded area in the southern state of Kerala, India, August 17, 2018. REUTERS/Sivaram V

The helicopters dropped food and water in metal baskets and airlifted at least four people, including a three-year-old child, from roofs, the witness said.

Elsewhere, a man with a cast on his leg was seen lying on the roof of a church as he awaited rescue.

Anil Vasudevan, the head of the Kerala health disaster response wing, said his department had geared up to handle the needs of victims.

“We’ve deployed adequate doctors and staff and provided all essential medicines in the relief camps, where the evacuees will be housed,” he said.

But a big worry was what happens after the flood waters fall. People going home will be susceptible to water-borne diseases, he said.

“We are making elaborate arrangements to deal with that,” he said.

Kerala is a major destination for both domestic and foreign tourists.

The airport in its main commercial city of Kochi has been flooded it has suspended operations until Aug. 26 with flights being diverted to two other airports in the state. Rail and road traffic has also been disrupted in many places.

“Water levels continue to overflow on track and surpassing danger level of bridges at different places,” Southern Railway said in a statement, adding it had canceled more than a dozen trains passing through Kerala.

The office of the chief minister said heavy rain was falling in some places on Friday. More showers are expected over the weekend.

Modi said on Twitter that he would travel to Kerala “to take stock of the unfortunate situation”. 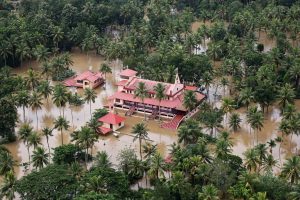 Kerala has been hit with 37 percent more rainfall than normal since the beginning of this monsoon, the Meteorological Department said.

Some plantations have also been inundated. The state is a major producer of rubber, tea, coffee and spices such as black pepper and cardamom.

“It’s very scary. I can still see people on their roofs waiting to be rescued,” said George Valy, a rubber dealer in Kottayam town.

(Reporting by Sivaram Venkitasubramanian in Kochi and Gopakumar Warrier in Bengaluru; Additional reporting by Jose Devasia in Kochi and Swati Bhat and Rajendra Jadhav in Mumbai; Writing by Euan Rocha and Sankalp Phartiyal; Editing by Robert Birsel) 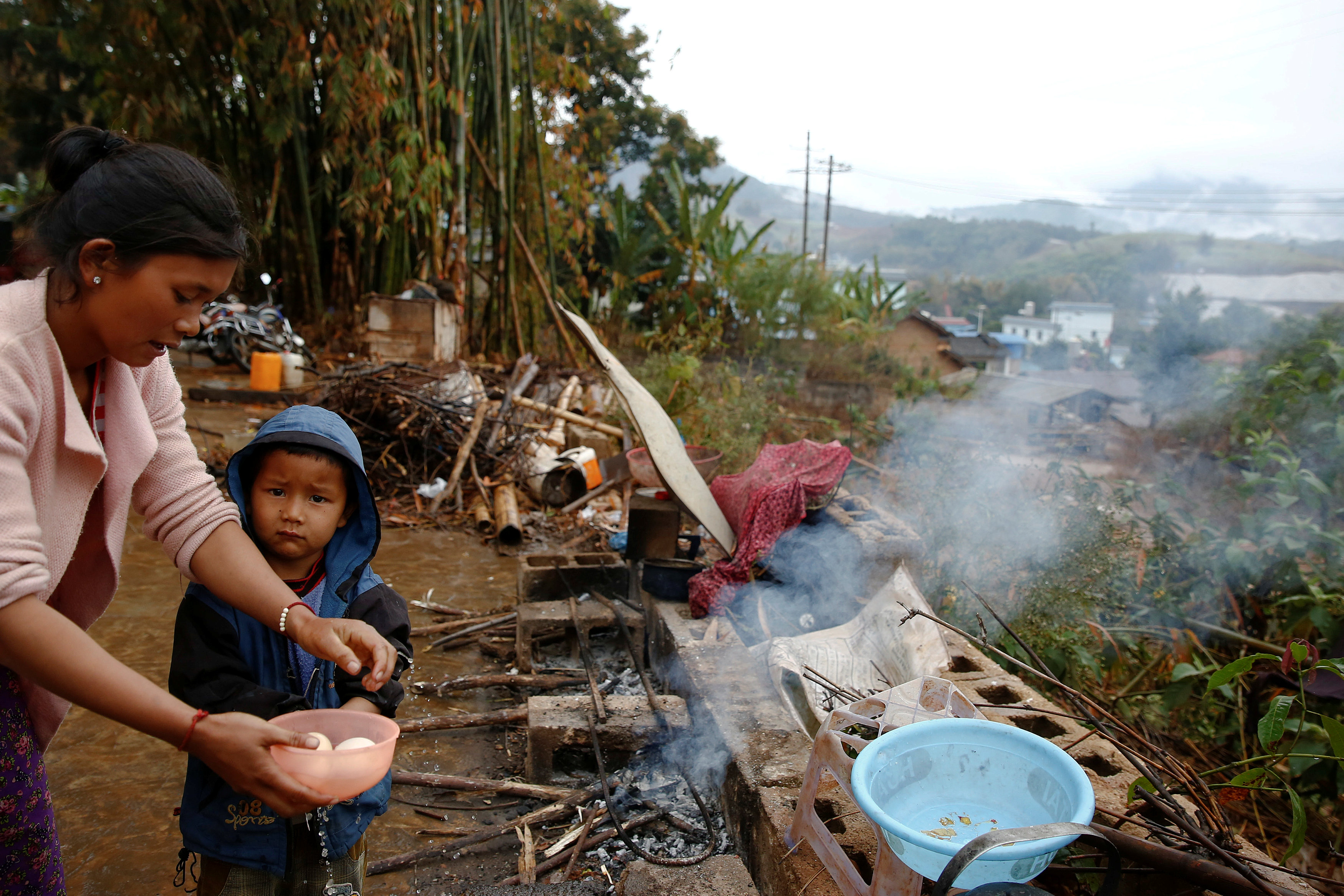 NANSAN, China (Reuters) – Within earshot of mortar fire echoing from beyond a ring of hills, a sprawling relief camp in Southwestern China is swelling steadily after fighting erupted last week between a rebel ethnic army in Myanmar and government troops just across the border.

In a recent Reuters visit to the rugged area in southwestern Yunnan province, aid workers and those displaced expressed fears of a more violent and protracted conflict than a previous flare-up in the Kokang region in early 2015.

“Every day, more people come,” said Li Yinzhong, an aid manager in the camp, gesturing at the mostly Han Chinese refugees from Myanmar’s Kokang region trudging through the reddish mud earth around rows of large blue huts where they sleep on nylon tarpaulin sheets.

“We will look after them until they decide they want to go back.”

Blue disaster relief tents provided by the Chinese also dotted the terraced sugarcane, maize and tea terraces flanking the mountainous winding road to Nansan. The town, close to the Kokang region of Myanmar’s Shan State, is providing refuge for a stream of refugees that Chinese authorities estimate number more than 20,000.

The violence is a blow to efforts by Myanmar’s de facto leader Aung San Suu Kyi, to reach a comprehensive peace agreement with Myanmar’s ethnic minorities, some of them in rebellions spanning decades.

Kokang has close ties to China. The vast majority are ethnic Chinese speaking a Chinese dialect and using the yuan as currency.

The Kokang began fleeing when the rebel Myanmar National Democratic Alliance Army (MNDAA) launched a surprise raid on Myanmar police and military targets in the town of Laukkai, resulting in the deaths of 30 people on March 6.

The Myanmar military has launched “56 waves of small and large clashes”, using cannons, armored vehicles and heavy weapons over the past two months, according to a statement published by the military on March 6 after the attack.

Rebel forces who lay historic claim to the Kokang region have attacked government troops with rocket-propelled grenade launchers and other military hardware.

In an “urgent notice” posted on Sunday on its official website, the MNDAA said the Kokang area was now in a “state of war” as fighting worsened.

On the Chinese side, paramilitary police have sent in battalions of reinforcements, mostly in readiness for disaster relief, according to Chinese officials who spoke on background.

Reuters saw seven Chinese armored personnel carriers moving west along the hilly road towards Myanmar and the relief camp sprawled across a muddy wasteland the size of 10 football fields.

The fresh unrest comes after fighting in early 2015 and in 2009 involving the MNDAA, both flare-ups displacing tens of thousands of people.

Ordnance has occasionally strayed into China, with five people in China killed in 2015 during a round of fighting then.

This time round, the door to a village house was blown out, and the upper floor of the Anran hotel in Nansan was shelled forcing its closure, according to local residents and one official. Reuters was unable to corroborate these accounts.

China has lodged “solemn representations” with Myanmar over its citizens put at risk by the conflict, foreign ministry spokeswoman Hua Chunying told a regular news briefing on Monday.

“The Chinese will be very angry if it escalates to the level of 2015,” said Sino-Myanmar expert Yun Sun, a senior associate with the Stimson Center in Washington D.C.

Beijing wants the Kokang to be included in the comprehensive peace negotiations that Aung San Suu Kyi initiated last August, she said.

The military has blocked that, saying the rebels can only join if they lay down arms first. “The Chinese actually tacitly and privately support the Kokang being included in the negotiations, but they can’t say that,” Sun said.

At around three in the morning on the day of the rebel raids, loud explosions and gunfire woke the Cao family, prompting them to flee at first light with few possessions.

“More than half the people (in my village) left,” he said, as others crowded around an open sitting area of a Chinese village house transformed into a makeshift refuge.

Yao Xiao’er, the 49-year old head of the household, said she sent the farm vehicles across the border soon after hearing the first bursts of distant thudding.  She eventually got nearly 100 relatives and friends to safety including a two-year-old toddler and a nonagenarian, half-blind, family matriarch, who was dozing on a tatty sofa.

One young mother with a baby strapped to her back said many refugees were seeking out odd jobs to make ends meet.

“We have no money so some of us cut sugar cane,” she said. “We get around one yuan for every 20 sticks we chop, peel and uproot.”

A Chinese taxi driver plying the route between a Chinese airport in Lincang and the seedy frontier casinos of Myanmar’s Laukkai, said business was drying up.

“No one is coming here anymore.”