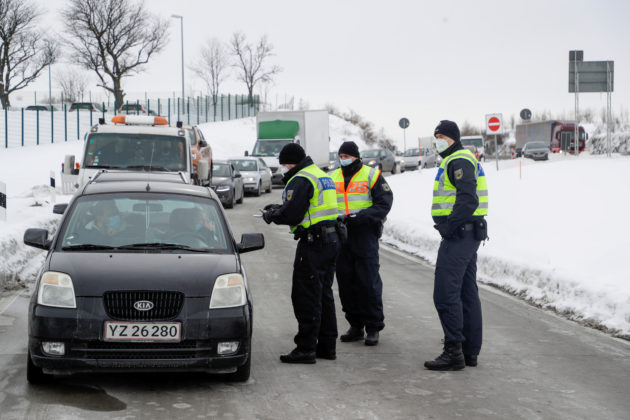 FILE PHOTO: German police officers check vehicles at the border with Czech Republic, following German restrictions to cross from the Czech Republic into its territory due to the coronavirus disease (COVID-19) pandemic, near Breitenau, Germany, February 15. 2021. REUTERS/David Cerny/File Photo

PRAGUE (Reuters) – The Czech Republic must tighten measures to combat the pandemic and prevent a “catastrophe” in hospitals in the coming weeks as the country faces one of the world’s highest COVID-19 infection and death rates, Prime Minister Andrej Babis said on Wednesday.

The country reported over 15,000 new COVID-19 cases on Tuesday, the highest daily tally since Jan. 6, and has the fastest spread rate in Europe, with per capita infections more than six times higher than in neighboring Germany in the last two weeks.

The number of hospital patients with COVD-19 who are in serious condition has risen to a record 1,389, leaving few spare beds in the country of 10.7 million.

Some hospitals have had to transfer out patients while the health minister has warned hospitals risk being overwhelmed in the coming weeks. The government is looking at asking Germany for help with some patients.

The country has reported a total 1.18 million cases of the virus and 19,682 deaths since the first infections nearly one year ago.

Babis said the situation was grave.

“Hellish days await us,” he said at a news conference.

The government is due to hold talks on possible further measures later on Wednesday. Babis said the health ministry would propose restrictions but declined to give details.

The country has been in some level of lockdown since October as it has battled a much harsher second and now third wave of the pandemic. Industry, though, has remained running unlike early in the pandemic when large factories shut for several weeks, hammering the economy.

Restaurants, gyms, theatres and other entertainment venues are closed while only shops selling essential goods are open.

Schools are shut except for pre-schools and the first and second grades. Babis said an aim to start returning other students to classrooms next week was not possible anymore.