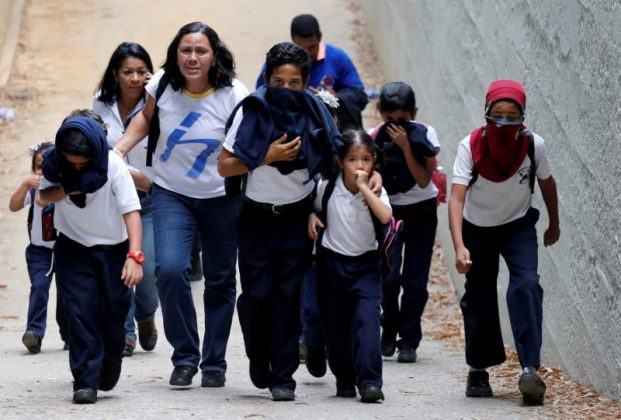 By Brian Ellsworth and Andreina Aponte

CARACAS (Reuters) – With anti-government protesters blocking avenues and highways across Venezuela several times a week, many parents spend their evenings asking the same question – will my kids make it to school tomorrow?

While parents worry they will be unable to pick up their children after classes because of the tumult, teachers are often forced to skip work due to the clashes between protesters and troops.

Yet the Education Ministry has refused to cancel classes at state schools even when spillover from demonstrations poses a risk to children – primarily from the tear gas fired to disperse protesters.

It also has forbidden private schools, which serve about a quarter of the country’s primary and secondary school students, from suspending lessons.

The result is that one of the most routine parenting responsibilities – getting children to school – now requires constantly juggling of contingency plans and calculating the odds of getting through protests that have left 75 people dead.

“We check Twitter until about 9:30, 10:00 at night and that’s when we decide if we’re going to take our son to school the next day,” said Ignacio, 33, a telecom engineer who asked that his last name not be used for fear of reprisals.

“Sometimes my wife will leave to pick him up and she’ll come across barricades or lanes closed on the highway, so we have to figure out if I have to rush from work to get him.”

Outraged by triple-digit inflation and chronic shortages of food and medicine, demonstrators gather on main avenues for protests that range from peaceful sit-ins to rock-throwing melees with troops firing rubber bullets and tear gas.

That creates traffic chaos that can disrupt public transportation just as school is letting out.

Protesters are demanding that the Socialist government of President Nicolas Maduro address a crippling economic crisis and scrap plans to rewrite the constitution of the South American oil producer.

Parents try to delicately explain to their kids why they are not in class while still sheltering them from the country’s virulent political discourse, which is increasingly drifting into the lexicon of even elementary school children.

Teachers constantly reschedule lessons and tests to compensate for missed days of the academic year, which normally runs from October to July. Parents worry that their kids risk falling behind in their studies if the unrest continues.

The protests have disrupted daily life well beyond schools. They at times prevent deliveries of raw materials to factories, force state agencies to remain closed, and lead shops to preventively shut their doors on rumors that demonstrations are devolving into looting.

The Information Ministry did not respond to a request for comment on the situation. 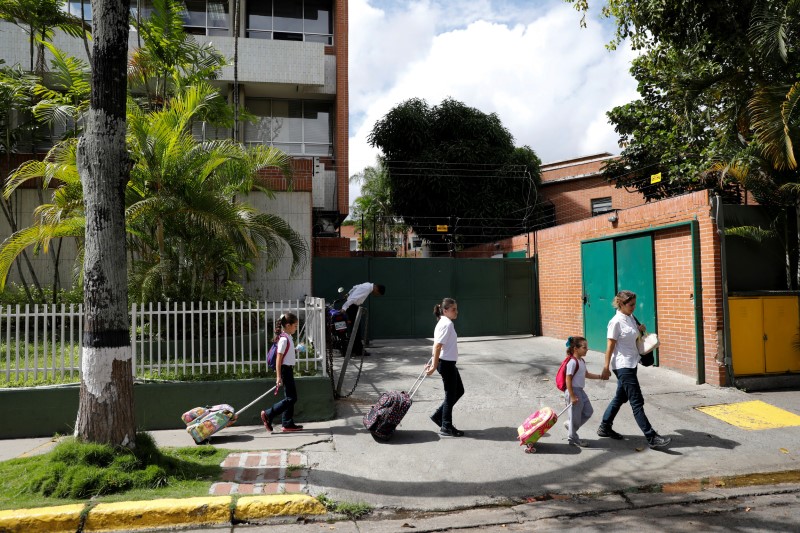 Caribay Valenzuela (R), walks with her daughters (L-R) Carlota, Eloisa and Carmen, after picking them up on the school on a day of protests in Caracas, Venezuela June 19, 2017. REUTERS/Carlos Garcia Rawlins

Maduro says private schools have in some cases canceled class as a way of supporting the opposition.

“I have ordered an investigation against those owners of private schools that have promoted hatred, racism, violence,” Maduro said in a televised broadcast in May.

The Education Ministry last month said it had fined 15 private schools for “permitting, provoking and inciting violent actions in educational facilities and their surrounding areas.”

As a result, schools remain open even under extreme circumstances.

National Guard troops in late May fired a tear gas canister into the main patio of a school called the Montessori Institute in the city of Barquisimeto, according to a local media report, in an apparent effort to disperse a nearby protest.

When a group of students left the building to escape the fumes, three of them were detained by the National Guard, according to the report.

A school official said the report was accurate but declined further comment.

Two Caracas Catholic schools in separate incidents in April had to evacuate children after they were flooded by clouds of tear gas, according to Reuters witnesses. The schools declined to comment.

Chief Prosecutor Luisa Ortega, who has become a high-profile critic of the government’s handling of protests, recently called on security forces not to fire tear gas near clinics and schools.

Under the circumstances, many parents opt to leave kids at home. But this can lead to heightened government scrutiny of schools.

Education Ministry officials threatened to shutter one private school in the central state of Lara, where classrooms went empty for days on end due to parents’ safety concerns, according to two parents of children that study there.

They backed off the threat after an inspection determined that teachers were working normal hours, sitting in silent classrooms and maintaining lesson plans, they said.

A third parent, who is involved in the parent-teacher association, confirmed the incident but asked that the school not be named to avoid reprisals. Reuters was unable to obtain comment from the school.

Caribay Valenzuela, whose two daughters study near the Altamira neighborhood that has been a focal point of protests, sends them to school with goggles and a handkerchief in case the protests spill over.

The 39-year-old routinely picks up her kids early and takes them to her mother’s house because her own home is at times hit by tear gas.

“They ask me to pick up the kids at 10 a.m. when there are marches to make sure that staff can get home,” Valenzuela said.

“Maintaining the routine has been really difficult because they ask me ‘Is there school tomorrow? Is it a full day? What are we going to do tomorrow?'”