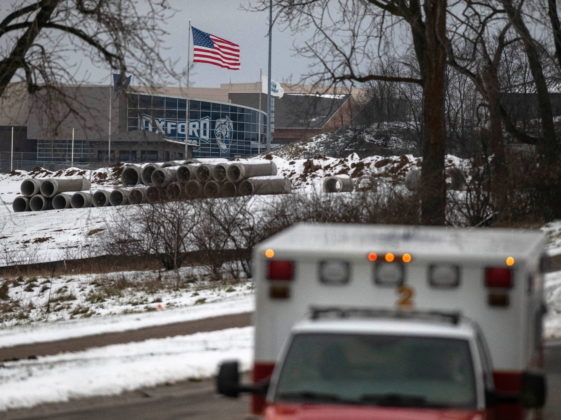 Emergency personnel respond to the scene of a deadly shooting where at least three were killed and six were wounded at a high school in Oxford, Michigan, about 35 miles (55 km) north of Detroit, U.S., November 30, 2021. REUTERS/Seth Herald

By Steve Gorman and Brendan O’Brien

(Reuters) – Investigators were reviewing video and reading the writings of a 15-year-old boy on Wednesday as they sought clues to what drove him to go on a deadly shooting spree at his high school north of Detroit, where he killed three fellow classmates.

The suspect, whose name was withheld by officials because he is a minor, opened fire on Tuesday with a handgun his father had purchased four days earlier, killing three students in Oxford, Michigan, about 40 miles (65 km) from Detroit.

Tate Myre, 16, died in a patrol car en route to a hospital. Hanna St. Julian, 14 and Madisyn Baldwin, 17, were also killed in the shooting. A teacher and seven other students were wounded, some critically, authorities said.

“It’s clear that he came out with the intent to kill people,” Oakland County Sheriff Michael Bouchard said in an interview on CNN on Wednesday.

“He was shooting people at close range, oftentimes towards the head and chest. … It’s just absolutely coldhearted murders,” he said, adding that the shooter fired at least 30 shots.

Bouchard said investigators were poring over writings of the shooter they obtained in the middle of the night that contain “some of his thoughts.” They were also watching surveillance videos of the incident.

“We can’t get the motive from the suspect that we have in custody, but we think we’ve got a path to get a lot of supportive information as to how and why this occurred,” he said.

The incident was the latest in a decades-long string of deadly U.S. school shootings that will likely fuel debates about gun control and mental health care, with many states allowing easy access to firearms while mental health disorders often go untreated.

The suspect was armed with a 9mm semi-automatic handgun his father had purchased on Nov. 26, along with three 15-round magazines. Seven live rounds remained in the gun when the youth was arrested, the sheriff said late on Tuesday.

The suspect was disarmed and taken into custody by sheriff’s deputies minutes after the shooting began. He declined to speak with investigators after his parents retained a lawyer and denied authorities permission to interview their son, Bouchard said.

“The person who’s got the most insight on motive is not talking,” the sheriff said.

Bouchard said he was unaware of any previous run-ins with law enforcement by the suspect, a high school sophomore, adding that investigators had so far seen nothing to suggest a history of disciplinary problems or threats.

He said forensic technicians were collecting evidence from the crime scene, while detectives began collecting video footage from security cameras mounted around the school and interviewing witnesses and those acquainted with the suspect.

The sheriff said a search warrant was executed at the suspect’s home in Oxford and his cellphone was seized.

Bouchard credited swift action by his deputies for preventing greater loss of life, saying they arrived on the scene within minutes and moved straight toward the sound of gunshots.

Officers confronted the young assailant advancing down a hallway toward them with a loaded weapon, and he put his hands over his head and surrendered, Bouchard said.

The precise sequence of events during the violence remained unclear, but police believe the student carried the weapon into school in a backpack, the sheriff said.

“The only information I have is that he came out of a bathroom with a weapon, and I don’t know where he went first,” Bouchard said.

Prosecutors will decide what charges to bring and whether the suspect should be treated as an adult or juvenile, the sheriff said.

The boy, who was unharmed, was being detained in a special cell under suicide watch at a juvenile detention center, Oakland County Executive David Coulter said.

Of the seven other students struck by gunfire, three of them – a 15-year-old boy with a gunshot wound to the head and two girls with chest wounds, aged 14 and 17 – were hospitalized in critical condition, Bouchard said. The younger girl was on a ventilator after surgery.

The four remaining teenage victims – three boys and a girl – were listed in serious or stable condition, he said

One teacher was treated for a shoulder wound and later discharged.

The boy apparently “had been shooting” the gun before Tuesday’s attack and had posted pictures of the weapon and a target he was using, according to the sheriff.

(By Steve Gorman in Los Angeles and Brendan O’Brien in Chicago; Editing by Lincoln Feast and Jonathan Oatis)