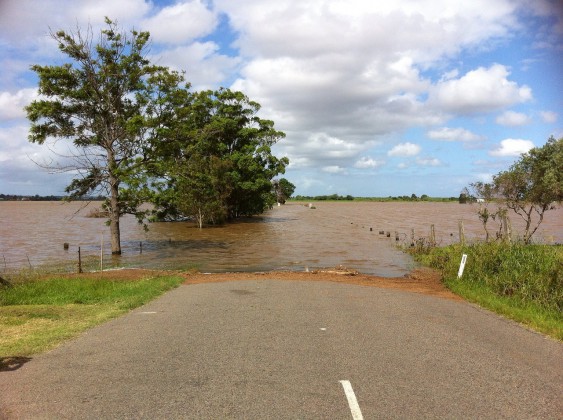 Luke 21:25,26 NLT “And there will be strange signs in the sun, moon, and stars. And here on earth the nations will be in turmoil, perplexed by the roaring seas and strange tides. People will be terrified at what they see coming upon the earth, for the powers in the heavens will be shaken.”

Large portions of the central United States remained under flood warnings on Thursday morning as high waters continued to wreak havoc on dozens of riverside communities.

While floodwaters began to recede in many locations, particularly around hard-hit greater St. Louis, they remained at critically high levels. The National Weather Service warned that towns and cities further south along the Mississippi River could experience “significant river flooding” into mid-January as the massive amounts of water flowed downstream, according to its website.

The National Oceanic and Atmospheric Administration (NOAA) reported that 365 river gauges remained at flood stages on Thursday, 44 of which were at “major flooding” levels. The river gauges don’t always consider lakes, creeks or streams, many of which also breached their banks.

Missouri Governor Jay Nixon, who declared a state of emergency and mobilized the National Guard in the wake of the flooding, said the floods are responsible for killing 14 people in the state, according to a news release from his office. The Missouri Department of Transportation said at least 200 roads were submerged statewide early Thursday, according to a news release.

A busy 21-mile stretch of Interstate 44 remained closed near St.Louis, and the statement from Nixon’s office indicated it was the first time floodwaters shut down the road since 1982.

The Meramec River in Valley Park, Missouri, near St. Louis, crested at a record level of 44.11 feet early Thursday, according to the NOAA, which was more than four feet above a 33-year-old record and only the second time the river reached 38 feet in the past century. The river receded slightly to 43.57 feet later Thursday, the NOAA said, but that was still 27 feet above flood stage.

The community ordered those in low-lying areas to evacuate as the waters surged toward historic heights, according to a posting on its Facebook page. The city is protected by a levee, the posting indicates, but there was still “significant flooding” in several portions of the city.

The Meramec River flooding also damaged “hundreds of homes and businesses” in Pacific, Missouri, according to the governor’s office. The city, located upstream from Valley Park, crested just shy of its all-time record, the NOAA said, but that was still 18 feet above flood stage.

As the waters departed Valley Park and Pacific, they arrived further downstream.

NOAA data indicates the Meramec River in Arnold climbed to an all-time high of 47.22 feet on Thursday morning, nearly two feet above the record and roughly 23 feet above flood stage. The city recommended people evacuate because of the danger to residences, according to its website.

The Meramec flows into the Mississippi River, and communities downstream were expected to see waters rise further. In Chester, Illinois, the NOAA said waters were already at 44.26 feet on Thursday, 17 feet above flood stage and its second-highest level ever, and forecasts called for another 3-foot rise this week. Several roads in the city were already closed, its website indicates.

“This historic flooding event will continue to cause significant hazards and disruptions – from Missourians being forced from their homes, to businesses temporarily closing, to traffic congestion and impacts on interstate commerce due to the closure of a major trucking corridor,” Nixon said in a statement. “I thank the many Missourians who are assisting their neighbors by providing rooms in their homes, helping with sandbagging efforts and countless other acts of kindness.”

Missouri wasn’t the only state affected by the extreme weather.

The storm dumped snow, ice and rain throughout Oklahoma, prompting Governor Mary Fallin to extend a state of emergency. The state Department of Emergency Management reported Wednesday evening that five people lost their lives and another 104 were injured in the storm.

Earlier this week, Illinois Governor Bruce Rauner said “significant issues related to flooding” had occurred in seven counties and he issued a disaster proclamation for those areas, according to a news release from his office.