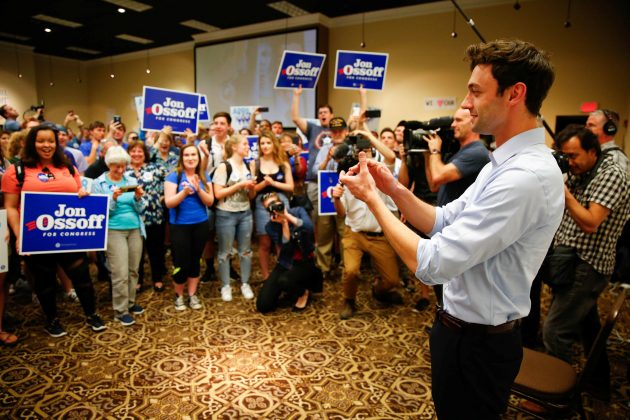 A 30-year-old political novice, Ossoff is running as the lone Democrat against a field of 17 Republicans for a seat in the U.S. House of Representatives vacated when Trump named Tom Price as his health secretary.

An Ossoff win would not tip the balance of power in the Republican-controlled House but could weaken Trump’s already shaky hold on his party there by encouraging those in competitive districts to distance themselves from him.

Ossoff faces formidable odds. Georgia’s 6th District has elected Republicans to the House since the late 1970s. Trump won the Southern state by about 5 percentage points in November’s election.

Still, opinion polls show Ossoff leading his many rivals. With the slogan “Make Trump Furious,” he aims to galvanize opposition to a president struggling with low approval ratings.

“We have an amazing chance here, an extraordinary moment for Georgia,” Ossoff told campaign volunteers as they headed out for a final round of door-knocking on Monday afternoon.

Ossoff raised a stunning $8.3 million in the first quarter, forcing Republicans to spend heavily against him. Those in the race are split among Trump supporters and candidates trying to hold the president at arm’s length.

Trump defeated Democratic presidential nominee Hillary Clinton last year, and Republicans have controlled the White House and both chambers of Congress since January. But they have yet to enact major legislation to fulfill campaign promises.

The president’s approval rating has not topped 50 percent since he took office on Jan. 20, Reuters/Ipsos polling shows.

Trump, a businessman and TV celebrity who previously had not held political office, has blasted Ossoff as a “super Liberal Democrat.”

In several tweets on Tuesday, he said Ossoff was “very weak on crime and illegal immigration, bad for jobs and wants higher taxes” and urged Republicans to vote to force a run-off.

Ossoff aims to win an outright majority in Tuesday’s vote, a “jungle primary” with all 18 candidates from both parties on the same ballot. If no one reaches 50 percent, the top two vote-getters square off on June 20.