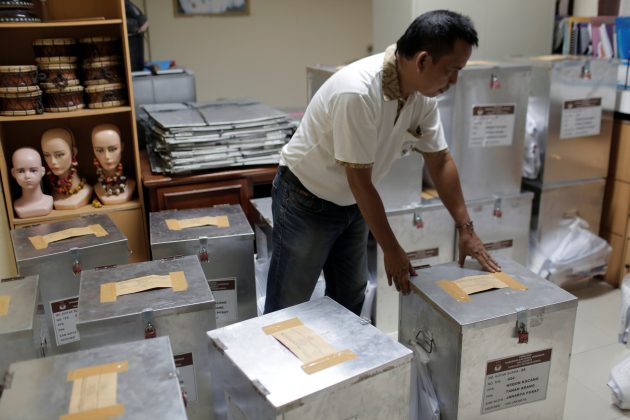 By Fergus Jensen and Tom Allard

JAKARTA (Reuters) – Luar Batang is one of the Indonesian capital’s oldest neighborhoods, founded in the 17th century to collect tolls from ships sailing in from the Java Sea when the city was the center of the Dutch East Indies spice trade.

Now, it is being demolished and many of its residents are being evicted to make way for a giant seawall meant to keep Jakarta from sinking under rising sea levels. That has made it ground zero for the election of the city’s governor, dubbed one of the most divisive election campaigns Indonesia has ever seen.

The incumbent governor, Basuki “Ahok” Purnama, was cruising toward a decisive election victory last September when he allegedly criticized a verse from the Koran that warns Muslims against allying with Christians and Jews.

Hardline Islamist groups responded with mass protests demanding that Purnama, an ethnic Chinese and Christian, be prosecuted. Police eventually did charge him with blasphemy.

It was Purnama who ordered the evictions from Luar Batang’s slums to make way for one of his many infrastructure projects aimed at modernizing this clogged and chaotic city.

Many of those who filled the streets of Jakarta to protest against him late last year were among the displaced, and violence broke out in Luar Batang after one of those demonstrations.

Luar Batang residents had just about given up their fight against evictions when the controversy over the Koran comments erupted, said one woman who did not want to be named, sitting outside a small shack amid the rubble.

“We see it as a gift from God,” she said, describing the slur as a means to bring down Purnama.

Opinion surveys show Purnama running neck and neck with his challenger Anies Baswedan, who, like some 85 percent of Jakartans, is a Muslim.

Purnama, 50, inherited the governorship after Joko Widodo was elected president in 2014. His brash talking style, a contrast with the soft-spoken Javanese politicians who dominate the ruling class, has grated on some voters.

Purnama won the first round of voting in February in a three-way race with 43 percent of the ballots to set up Wednesday’s second round with Basedan, who won 40 percent.

The campaign has been “the dirtiest, most polarizing and most divisive the nation has ever seen,” the Jakarta Post said in an editorial on Tuesday.

Calling the capital “the barometer of Indonesia’s political pulse”, the daily said the election would have a bearing on the next presidential election in 2019.

Police on Monday blocked plans by hardline Islamist groups to guard polling booths, citing the risk of clashes after a campaign fraught with religious tensions, and said around 66,000 police and military personnel will be deployed on voting day.

Prabowo Subianto, head of the Gerindra Party that Baswedan represents, said in a video message recorded over the weekend that “religious people need a leader who respects their beliefs”. Prabowo lost the 2014 election to President Widodo.

Purnama faces up to five years in jail if convicted of blasphemy. His trial will resume on Thursday, when prosecutors will submit their sentence request.

Prabowo said he was concerned about potential voter fraud.

“Cheating is a common enemy to us. We don’t want to cheat,” he said. “However, we will not hold back if we are cheated.”

Hardline Islamic cleric Habib Rizieq, who helped organize the anti-Purnama demonstrations during the campaign, last week urged Muslims to travel to Jakarta and be ready to “finish” their opponents.

“Those who can come to Jakarta better have the guts to do so and prepare a will for your family,” he added, as the crowd roared in response.

At Luar Batang, where Prabowo’s party has set up tents for those evicted from their homes, the woman at the street cafe said people are tired of politicians’ false promises and warned that frustration could boil over if Purnama wins the vote.

“If (Purnama) is elected again something extraordinary will happen,” she said.