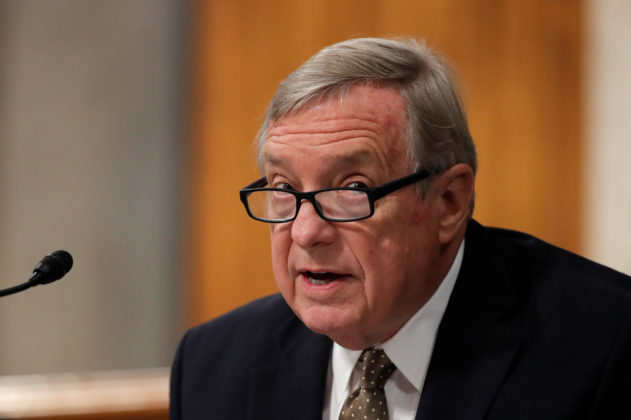 WASHINGTON (Reuters) – Democrats in Congress said on Friday they had offered to reduce a proposed coronavirus aid package by a trillion dollars if Republicans would add a trillion to their counter-offer, but the idea was flatly rejected by Donald Trump’s White House.

After nearly two weeks of talks that have failed to make substantial progress, the Republican president has threatened to pull his negotiators out and instead issue executive orders to address the human and economic toll of a crisis that has killed more than 160,000 Americans and thrown tens of millions of people out of work.

It was unclear how much any president could do by executive order. At a news conference, Schumer said the president could not order any new money spent – as that is the power of Congress – but could only defer costs until they were eventually paid.

Democrats have advocated for a $3 trillion-plus economic aid program, while leading Republicans have proposed about a third of that.

“Yesterday I offered to them, we’ll take down a trillion if you add a trillion in,” Pelosi said. “They said absolutely not.”

She said she would make the offer again at an afternoon negotiating session with Mnuchin and White House Chief of Staff Mark Meadows. “We’ve got a responsibility to find common ground,” Pelosi said.

Pelosi said the proposed $1 trillion cut in Democrats’ plan would mean the aid would run out sooner.

Schumer said the White House would have to compromise with Democrats, because they need Democratic votes to get anything passed by Congress. “They can’t just say no,” he said.

“Their other choice is to do some weak insufficient executive orders that wont do the job for the people we want to help,” Schumer said.

Pelosi said Democrats want the biggest possible number for reviving an expired federal payment to the unemployed that had been $600 a week. Renewing that benefit has been a leading Democratic demand.

The White House at one point suggested $400 a week in federal benefits for the unemployed, but Democrats rejected it and have refused to do a separate deal on that, saying they wanted a comprehensive package that also included money for state and local government and other matters.

Congress passed more than $3 trillion in relief legislation early in the pandemic. Senate Majority Leader Mitch McConnell has said a new boost is needed to help the U.S. economy, but some of his fellow Republicans oppose doing anything more.

Pelosi and Schumer have pushed for a comprehensive package of assistance for the unemployed, the poor, hospitals, schools, and state and local governments.