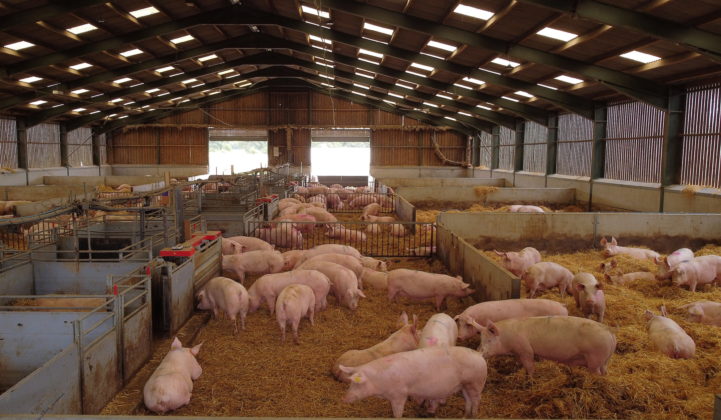 A group of breeding sows are pictured inside a barn on a family pig farm near Driffield, Britain, October 12, 2021. Picture taken with a drone. REUTERS/Phil Noble

Farmers across Britain say a combination of Brexit and COVID-19 have sparked an exodus of east European workers from abattoirs and meat processors, leaving pigs to back up in barns and fields across the country.

As the pigs gain weight from the extra time spent on the farm, eating food that has also jumped in price, they risk passing the size threshold at which abattoirs impose financial penalties because they have become harder to handle.

While some have started culling pigs, others like Kate Morgan and Vicky Scott are desperately trying to keep theirs until they can go for slaughter, but they warned that tensions were running high and many farmers were quitting the job.

“The pressure is like pressure we’ve never had before, emotionally it’s absolutely draining, financially it’s crippling,” Scott told Reuters over the squeals and grunts of a couple of hundred pigs. “We’re in a fairly bad place right now.”

Industries across Britain have warned in recent months that they are struggling to maintain operations after European workers returned home in the summer, with gaps being felt on farms, in factories and throughout the freight sector.

The problem has hit pig farming hard. Making little profit at the best of times, it is now losing money on every pig sold and the National Farmers Union warned two weeks ago that up to 150,000 pigs could be culled.

Morgan and Scott say a 25% capacity cut by their abattoir has left some 5,000 pigs in the towering barns that stand out on the open, flat fields of east Yorkshire. While talking to Reuters they received news of another abattoir cancellation.

Morgan said they were doing everything they could to avoid a cull but that the pressure was building. “We are juggling everything, trying to put pigs where maybe they shouldn’t be just so that we don’t get to that situation,” she said.

She urged Johnson to ease post-Brexit immigration rules and allow European butchers to enter Britain without needing to first pass a comprehensive English language test, a requirement that the industry says is putting off workers.

The pleas have so far fallen on deaf ears. Johnson has said businesses need to wean themselves off the “drug” of cheap migrant labor and invest in technology and higher salaries to recruit enough British workers.

He has provoked the ire of farmers in recent weeks by quipping, variously, that bacon sandwiches come from dead pigs and that animals are bred on farms to be slaughtered.

“Have you ever had a bacon sandwich?” Johnson asked a Times Radio journalist when questioned about a possible pig cull. “Those pigs, when you ate them, were not alive.”

Scott says their farm has ploughed money into technology and retained staff by frequently hiking wages. The problem lies in abattoirs and meat processors where butchers are often more efficient than machines. The sisters note that higher wages in the sector would also lead to higher food prices.

Short term, Scott says a relaxation of visa rules is the only solution to get the industry straight. “Hopefully the government are listening to us now,” she said. “It’s critical, it’s very time critical and we need them to do something, now.”