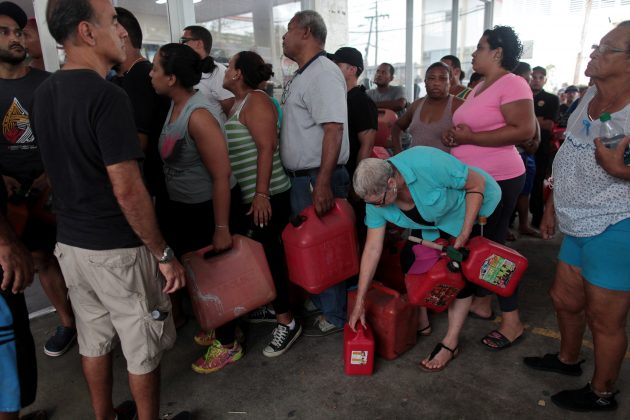 SAN JUAN, PUERTO RICO/NEW YORK (Reuters) – Puerto Rico resident Marangelly Garcia waited eight hours for diesel to fuel her family’s generator on Monday, but the supply ran out before she got to the front of the line.

The beauty products distributor tried again Tuesday, waking up at 4 a.m. But the line in her municipality of Guaynabo, near San Juan, was still formidable.

Her latest strategy to get a place in line: “I’m going to be camping tonight.”

With Puerto Rico’s electric grid in shambles after Hurricane Maria, gasoline and diesel have become liquid gold in this U.S. territory. The island’s 3.4 million residents urgently need it to fuel their automobile tanks and power generators to light their homes and businesses.

But like so many other necessities here, the distribution of fuel is reliant on a transportation network crippled by the storm.

Puerto Rico gets most of its fuel sent by ship from the United States. But restrictions at its ports, with one closed and another operating only during the daytime, has limited shipping. Meanwhile, tanker trucks have had difficulty navigating the island’s blocked and damaged roads.

U.S. Air Force Colonel Michael Valle, on hand for relief efforts in San Juan, said he was most concerned about “the level of desperation” that could arise if fuel distribution did not return to normal within a couple of weeks.

Complicating those efforts is the shutdown of Puerto Rico’s primary fuel storage point. Known as the Yabucoa terminal, the facility is located in the hard-hit southeastern part of the island, where Maria first made landfall. The terminal was closed prior to the storm and has yet to re-open, according to Buckeye Partners, the terminal operator, which said a full assessment of the facility is under way.

Yabucoa can store up to 4.6 million barrels of crude oil, gasoline or products like fuel oil and diesel needed for power generation. That storage point is used for distribution for other islands in the Caribbean as well.

Adding to Puerto Rico’s difficulties is the sudden surge in demand for diesel to power generators. A shipping broker who was not authorized to speak to the press said concerns about diesel supplies were growing.

The few gas stations operating in Puerto Rico have attracted miles-long lines of cars, where drivers wait seven hours or longer in queues that snake through neighborhoods, up highway exit ramps and onto freeways.

“People here are going crazy trying to find gas,” said motorist Peter Matos, 60, of Yauco, a city in the southwestern part of the island. “I have about half a tank left.”

The day after the storm hit, Rossello advised mayors that there was sufficient fuel, Morales said, but the problem was distribution as it was stored at the ports and terminals on the island, and could not be easily routed to areas that needed it.

The island’s residents use about 155,000 barrels of fuel a day, less than 1 percent of the 19 million barrels consumed daily in the United States. Puerto Rico has no operating refineries, as the last one idled in 2009.

The good news is that the Port of San Juan, the island’s primary port, has experienced minimal damage, according to Jose Luis Ayala, chairman and director general of Puerto Rico’s division of shipping company Crowley Maritime Corp.

He said ships carrying fuel were moved south out of Hurricane Maria’s path, and were able to get to the Port of San Juan once the terminal re-opened on Friday.

“Even though there was some damage, it was functional,” he said. According to Thomson Reuters shipping data, three vessels were unloading fuel at San Juan as of Tuesday, while three others were waiting for opportunities to unload as well.

Large convoys of fuel trucks were seen traveling the highways on Monday, the first time in several days those vehicles were out in force. Hospitals and fuel stations are taking deliveries of diesel via trucks escorted by armed guards.

As of Monday, 91 trucks were supplying fuel and 108 filling stations were being guarded by the U.S. National Guard, according to a Tuesday statement from the island’s Secretary of Public Affairs, Ramon Rosario Cortes.