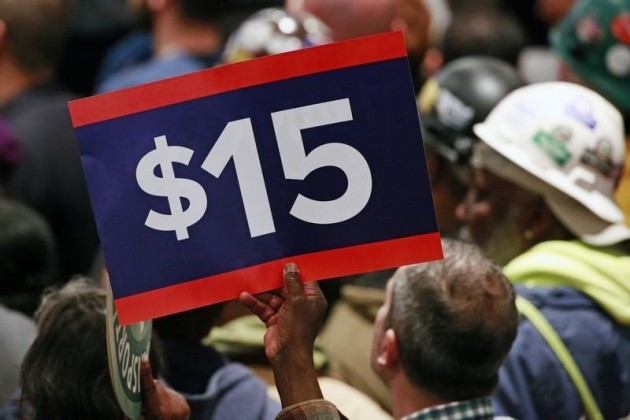 A supporter holds a sign aloft while listening to U.S. Democratic presidential candidate Hillary Clinton during a rally to celebrate the state of New York passing into law a $15 minimum wage in New York April 4, 2016. REUTERS/Lucas Jackson

WASHINGTON (Reuters) – The District of Columbia’s city council approved a $15-an-hour minimum wage on Tuesday, a rate adopted by a growing number of U.S. cities and states seeking to battle income inequality.

The council voted unanimously to pass the measure boosting the minimum hourly wage to $15 by 2020, with subsequent hikes tied to inflation. A final vote will come later this month, and Democratic Mayor Muriel Bowser has backed the bill.

Once approved, the U.S. capital will join California and New York in making $15 the hourly minimum. At least eight cities, including Seattle, have also approved the $15 base.

“Raising the minimum wage will help address the issues of residents being pushed out of the District due to rising costs of living and income inequality,” Council member Vincent Orange, a sponsor of the bill, said in the hearing.

He and other supporters say Washington’s robust economy and growing population mean it can support a higher minimum wage.

The $15 minimum is estimated to raise wages for 114,000 workers, or about 14 percent of the District of Columbia’s workforce, according to an analysis for the council by the non-profit Economic Policy Institute.

The higher pay proposal was supported by unions but was opposed by the District’s Chamber of Commerce. It said the District should not raise wages until neighboring suburbs do.

The District of Columbia’s booming restaurant industry also opposed it. Restaurant owners and the local restaurant association said that higher costs would lead to layoffs.

Some lawmakers said the measure did not go far enough to address a widening income gap and 18 percent poverty rate. Council member David Grosso added an amendment requiring the government to study a minimum income system to help the poorest residents.

Under the measure, the minimum for workers who get tips, like waiters and bartenders, would also be $15 an hour by 2020. Following talks with unions, restaurateurs and community activists, employers would have to make up the difference between a base for tipped workers that will be $5 an hour in 2020, up from the current $2.77, Orange said.