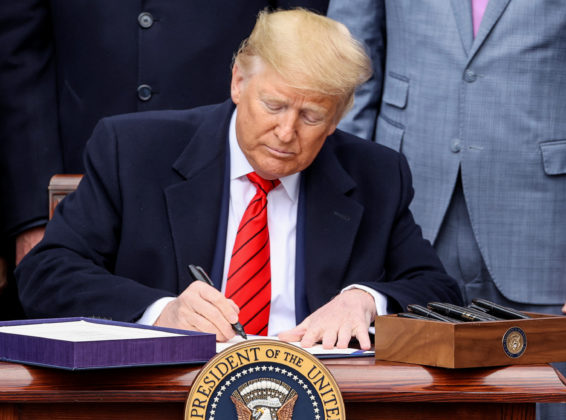 U.S. President Donald Trump checks a pen during a signs the United States-Mexico-Canada Trade Agreement (USMCA) during a ceremony on the South Lawn of the White House in Washington, U.S., January 29, 2020. REUTERS/Jonathan Ernst

WASHINGTON (Reuters) – With the impeachment drive against him ebbing, U.S. President Donald Trump will face his Democratic accusers on Tuesday night at a State of the Union speech where he is expected to push his case for another four years in office.

Trump, a Republican, may be tempted to lash out at the Democratic critics seated before him in the U.S. House of Representatives, seeing it as a chance for payback against those who sought to oust him through what he calls a “witch hunt.”

Some of his aides and allies, however, are pressing for him to avoid a confrontation.

The Republican-led Senate is almost certain to end the impeachment drive on Wednesday with a vote to acquit him. His speech, which starts at 9 p.m. ET (0200 GMT) on Tuesday, affords Trump the opportunity to advance his message for what is likely to be a hard-fought battle for re-election on Nov. 3.

Aides say there has been an internal debate inside the White House over whether he should even bring up impeachment in his speech.

U.S. House Speaker Nancy Pelosi, whose fellow Democrats charged Trump with abuse of power and obstruction of justice over his efforts to pressure Ukraine to investigate his Democratic opponents, told the New York Times they would treat him “as a guest … and we hope he will behave as a guest.”

But, she added: “I think the spotlight that is on him will be very hot for him to handle.”

A senior administration official said on Monday night that Trump was not expected to delve deeply into the issue, if at all, but acknowledged that this could always change.

Trump himself has said he plans an upbeat speech offering an optimistic vision at a time when Washington – and the rest of the country – is polarized over his leadership.

Senator Pat Roberts, a Kansas Republican and strong Trump supporter, told reporters on Capitol Hill on Monday that Trump would help himself by taking the high road.

“I hope he will smother people with the milk of human kindness,” Roberts said.

Asked if Trump could turn impeachment to his advantage by being gracious about it going forward, Roberts said, “Could. Some of us have urged that.”

The theme of Trump’s speech is “The Great American Comeback.” He plans to highlight the strength of the U.S. economy and achievements to support it like a China trade deal and another trade pact with Mexico and Canada.

Trump is also expected to offer to work with his political opponents on issues like reducing healthcare costs and drug prices and rebuilding infrastructure, officials said.

But with the two parties immersed in election-year politicking, no major legislative action is expected this year.

Trump is expected to contrast his vision for healthcare with the plans advanced by his Democratic rivals, a reference to left-leaning proposals by two of the Democratic presidential candidates he frequently attacks, Senators Bernie Sanders and Elizabeth Warren.

He is also expected to promote his efforts to limit migrants from crossing the southern U.S. border, and will bring two relatives of a man who was killed by an undocumented immigrant as guests to the speech, White House spokeswoman Stephanie Grisham told Fox News in an interview on Tuesday morning.

Trump will also highlight national security moves such as his decision to kill Iranian military commander Qassem Soleimani with a U.S. drone strike.

Still, the president held out little hope for bipartisan cooperation this year in the wake of the impeachment fight, saying he doubted Democrats would want to work with him.

“I’m not sure that they can do it, to be honest,” Trump told the Fox network in a Super Bowl Sunday interview.

Pelosi, who will be seated behind Trump when he addresses Congress, told the Times in her interview Monday that she had not spoken to Trump since October.

The State of the Union speech is attended by Democratic and Republican lawmakers from both the House and the Senate as well as such VIP guests as Cabinet secretaries and Supreme Court justices. The television audience for last year’s speech was estimated at 47 million people.

2 thoughts on “Dogged by impeachment, Trump goes head to head with Congress in big speech”