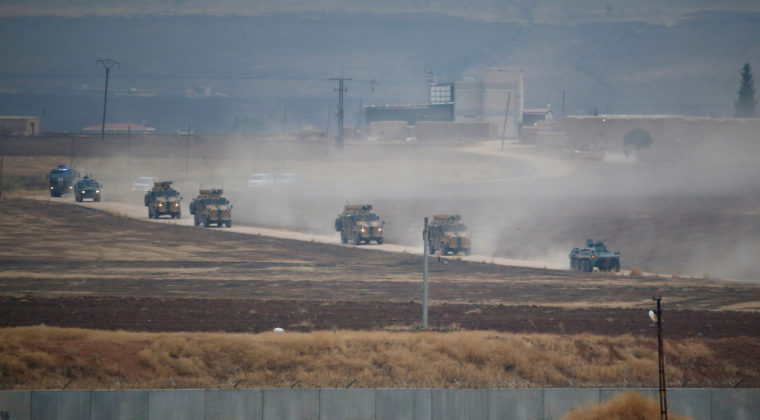 FILE PHOTO: Turkish and Russian military vehicles return following a joint patrol in northeast Syria, as they are pictured from near the Turkish border town of Kiziltepe in Mardin province, Turkey, November 1, 2019. REUTERS/Kemal Aslan/File Photo

By Orhan Coskun and Tuvan Gumrukcu

ANKARA (Reuters) – President Tayyip Erdogan said on Tuesday Turkey and Russia should resolve differences over the conflict in Syria’s Idlib without anger, after a deadly flare-up in violence challenged the fragile cooperation between Moscow and Ankara.

The two countries support opposing sides in Syria’s nearly nine-year war, as well as in Libya’s escalating conflict, but have worked together to contain some of the bloodshed and have forged close defense ties in recent years.

An attack by Russian-backed Syrian government forces that killed eight Turkish military personnel on Monday posed the biggest challenge to Russian-Turkish ties since their 2018 deal to stem fighting in Syria’s northwest Idlib region.

Erdogan told Russian forces on Monday there to “stand aside” while Turkey struck dozens of targets in retaliation. Moscow and Ankara then argued about whether Turkey had told Russia it was sending waves of reinforcements into Idlib.

“There is no need for us to be engaged in a conflict or a serious contradiction with Russia at this stage,” he was quoted as telling reporters on a flight from Ukraine.

“We will of course sit down and discuss everything. Not with anger, though. Because those who sit down with anger, get up with losses,” Erdogan added.

Russia supports President Bashar al-Assad in the war in Syria while Turkey backs rebels who once aimed to topple him.

Analysts said the relationship should survive the testy spell even while risks remained on the ground in Syria. Turkey, which already hosts 3.6 million refugees, fears Russian air strikes and a recent northward surge by Syrian troops threaten to send millions more refugees towards its border.

“Now we see more clearly the limits of the Turkey-Russia cooperation in Syria…and the question is have we reached a different level of escalation” given the attacks on Turkish troops, said Sinan Ulgen, a former Turkish diplomat who chairs the Center for Economics and Foreign Policy Studies.

But “this episode is not going to lead to a permanent break between Ankara and Moscow. They will find ways to overcome this… because both sides continue to rely on each other” to contain the situation in Idlib, he said.

Turkey’s foreign minister told his Russian counterpart to rein in Syrian forces and again warned of retaliation against provocative attacks on Turkish observation posts in Idlib set up under a 2017 agreement with Russia and Iran.

“We also don’t accept the excuse of ‘we cannot fully control the regime’ here,” Mevlut Cavusoglu said of Russia.

The Turkish security official said Ankara had no plans to withdraw from its 12 observation posts in the area, even though some are now surrounded by Syrian government forces.

Konstantin Kosachev, a senior Russian lawmaker, called the heightened fighting a “serious test of the strength of the existing Russian-Turkish agreements” in both Idlib and in northeast Syria, where the two countries have jointly patrolled.

The Idlib violence has accelerated in recent months despite several ceasefire efforts, including as recently as January.

United Nations regional spokesman David Swanson said 520,000 people had been displaced since the beginning of December and the numbers could swell further.

(Additional reporting by Dominic Evans in Ankara and Eric Knecht in Beirut; Writing by Ali Kucukgocmen and Jonathan Spicer; Editing by Gareth Jones)