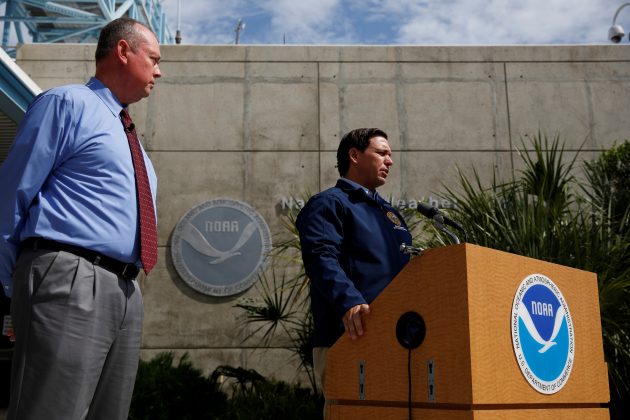 Florida Governor Ron DeSantis talks to the media during a news conference as Hurricane Dorian approaches the state, at the National Hurricane Center in Miami, Florida, U.S. August 29, 2019. REUTERS/Marco Bello

(Reuters) – Hurricane Dorian is forecast to strengthen and become a highly dangerous Category 4 hurricane on Sunday, threatening the Atlantic coast of central and south Florida, the National Hurricane Center said on Thursday.

That would make it a Category 4 storm, the second-strongest type on the Saffir-Simpson scale for measuring hurricane intensity. The center describes Category 4 storms as capable of causing “catastrophic damage” including severe damage to well-built homes. It said in such storms, “Most trees will be snapped or uprooted and power poles downed.”

Dorian is likely to make landfall on Florida’s eastern coast on Monday, before lingering over central Florida on Tuesday, forecasters at the hurricane center said in an advisory.

Currently a Category 1 hurricane, Dorian took aim at the Bahamas and the Florida coast on Thursday after sideswiping the Caribbean without doing major damage. Dorian is expected to strengthen and slam the Bahamas and the southeastern United States with rain, strong winds and life-threatening surf over the next few days.

The U.S. Coast Guard said all pleasure boats at the Port of Key West should seek safe harbor before the Labor Day weekend begins and ocean-going vessels should make plans to leave the port ahead of the storm.

“Dorian is expected to become a major hurricane on Friday, and remain an extremely dangerous hurricane through the weekend,” the hurricane center said, warning of an increasing likelihood of life-threatening storm surge along portions of Florida’s east coast late in the weekend.

The storm was packing maximum sustained winds of 85 miles per hour (137 km per hour) on Thursday morning some 220 miles (355 km) north-northwest of San Juan, and about 370 miles (600 km) east of the Bahamas, the hurricane center said.

“On this track, Dorian should move over the Atlantic well east of the southeastern and central Bahamas today and on Friday,” forecasters said, “and approach the northwestern Bahamas Saturday.”

“We are closely monitoring the weather. At this time our park operations and hours are continuing as normal. We have plans and procedures for serious weather that are time-proven and we will continue to make operating decisions as we learn more,” a theme park representative said in an email. 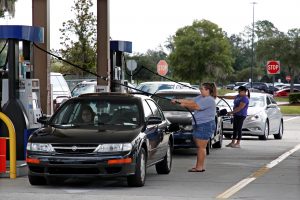 Local residents fill their cars with gas after waiting in line ahead of the arrival of Hurricane Dorian in Kissimmee, Florida, U.S. August 29, 2019. REUTERS/Gregg Newton

Puerto Rico is still struggling to recover from back-to-back hurricanes in 2017 that killed about 3,000 people soon after the island filed for bankruptcy. On Wednesday, it escaped fresh disaster as Dorian avoided the territory and headed toward Florida.