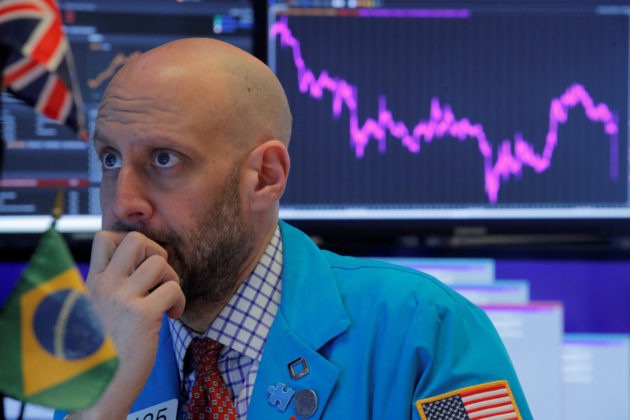 Specialist trader works at his post on the floor at the New York Stock Exchange (NYSE) in New York, U.S., February 24, 2020. REUTERS/Brendan McDermid

(Reuters) – The Dow Jones Industrials shed 800 points on Monday as investors scurried to safer assets after a sharp rise in coronavirus cases outside China fueled fears of a bigger impact to global growth.

Gold rose to a seven-year high and the inversion between the 3-month and 10-year U.S. Treasury yields deepened as a rise in cases in Iran, Italy and South Korea over the weekend fanned fears of a pandemic. An inversion of the curve is a classic recession signal. [US/]

All of the Dow’s 30 blue-chip members, as well as the 11 major S&P sectors were in the red. Technology stocks dropped 3.1% and were the biggest drag on the benchmark index. Defensive utilities and real estate posted the smallest declines.

Apple Inc slid 3.5% as data showed sales of smartphones in China tumbled by more than a third in January.

Last week, Wall Street’s main indexes notched record highs, partly on optimism that the global economy would be able to snap back after an initial hit, supported by central banks.

“Some people are re-assessing the extent to which China is being damaged by the spread of the virus and, more broadly, whether other parts of world will get contagion effects of that,” said Nitesh Shah, director of research at WisdomTree.

Chipmakers, which heavily rely on China for revenue, were among the worst performers, with the Philadelphia SE Semiconductor index down 4.2%.

Health insurers such as UnitedHealth Group Inc, CVS Health Corp and Cigna Corp dropped between 3% and 4.8% as Bernie Sanders, who supports the elimination of private health insurance, strengthened his position for the Democratic presidential nomination with a decisive victory in the Nevada caucuses.

In a rare bright spot, Gilead Sciences Inc, whose antiviral remdesivir has shown promise in monkeys infected by a related coronavirus, rose 5.8%.

(Reporting by Medha Singh in Bengaluru; Editing by Saumyadeb Chakrabarty and Arun Koyyur)