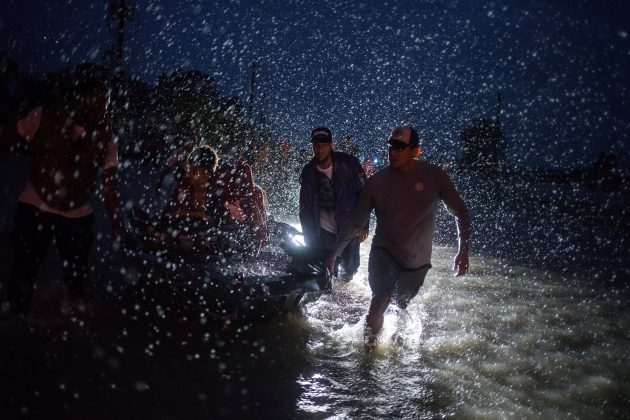 CYPRESS, Texas (Reuters) – The mayday call went out near midnight to all members of the Cy-Fair Volunteer Fire Department organizing rescue operations in the outskirts of Houston. There was a new emergency: Four of their own in peril.

On a suburban street transformed into a rushing waterway by Tropical Storm Harvey, a firefighter heading out to save people stranded by the storm fell into floodwaters as he was boarding a boat.

The firefighters turned all their attention to rescuing their fellow rescuer.

Matt Perkins, a 21-year veteran of the fire department of Cy-Fair, short for Cypress-Fairbanks, listened intently to the progress from the mini-command post set up in his truck at a gas station.

“Those are my guys out there. I want to make sure they are OK,” he said as he listened to his radio.

“Command Boat 21, do you need a helicopter at your location?” a radio dispatcher said.

“We can’t understand your response,” the dispatcher responded. “Your mic is wet.”

Hearing no response, the call became more urgent: “Repeat. Do you need a helicopter at your location?”

Finally the radio crackled back to life: “We are extracted. The boat is tied to a tree. We are walking out with the military.”

The three on board were able to pull the fourth out of the water, but the fast current pinned the boat to a tree and left them stranded.

It was just the first hair-raising moment in a long night of rescues by firefighters, police and the National Guard as rains from the devastating storm continued to hammer Houston and the surrounding area. More than 3,000 people had been rescued from their homes by late Monday and more rain was forecast for Tuesday.

National Guard teams with Humvees and high-water vehicles coordinated with local emergency officials to respond to calls from people trapped in their homes.

Residents of this city 30 miles (48 km) north of Houston are used to floods, having just weathered a major one last year. But many said they were caught by surprise by the extent of rising water levels, as the area was expected to get as much rain in a week as it normally sees in a year.

In the dark hours of the night, the National Guard navigated their vehicles through neighborhoods transformed into inland lakes with water cresting to the tops of mail boxes and fire hydrants and garden shrubbery looking more like watery mangrove forests.

With local firefighter Cassie Fritch guiding the troops with Google Maps on her cell phone, they searched for people who had called for help. When the water rose above the Humvee doors on the outside, it also seeped up through the floor on the inside and dripped in from the hatch.

At one home Fritch found a man who had changed his mind about evacuating and decided to stick it out. She warned him that rescuers would not be back if he called again.

“He says he’s not coming because the water receded,” Fritch said. “That’s his choice, but the storm’s not over yet.”