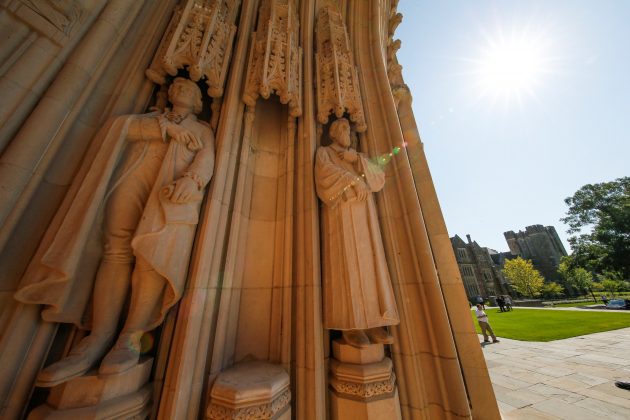 The empty plinth where a statue of Confederate commander General Robert E. Lee once stood is flanked by statues of Thomas Jefferson and the poet Sidney Lanier at the entrance to Duke University's Duke Chapel after officials removed the controversial statue early Saturday morning in Durham, North Carolina, U.S., August 19, 2017. REUTERS/Jason Miczek

(Reuters) – Duke University removed a statue of Confederate General Robert E. Lee from the entrance of a chapel on the Durham, North Carolina, campus, officials said on Saturday, days after it was vandalized.

The decision to take down the statue followed discussions among students, faculty, staff and alumni about maintaining safety on campus, university President Vincent E. Price said in a statement.

“I took this course of action to protect Duke Chapel, to ensure the vital safety of students and community members who worship there, and above all to express the deep and abiding values of our university,” Price said.

The prestigious university will preserve the statue of Lee, who led Confederate forces in the American Civil War of 1861-1865, and use it as an educational tool so that students can study “Duke’s complex past,” Price added.

The Confederacy, comprised of 11 Southern states, broke from the Union largely to preserve the institution of slavery.

Symbols of the Confederacy have come into focus since last weekend, when white nationalists, angered at the planned removal of a statue of Lee from a park in Charlottesville, Virginia, engaged in violent protests where a counter-protester was killed.

The Robert E. Lee statue, one of 10 outside Duke Chapel, was vandalized and defaced late on Wednesday night. Campus security discovered the damage early Thursday, according to university officials. The incident was under investigation.

“Wednesday night’s act of vandalism made clear that the turmoil and turbulence of recent months do not stop at Duke’s gates,” Price said.

“We have a responsibility to come together as a community to determine how we can respond to this unrest in a way that demonstrates our firm commitment to justice, not discrimination,” he said.

Duke will form a committee to advise the school on how to properly memorialize historical figures on campus, and to recommend teaching programs, exhibitions and forums to explore its past.

There are more than 1,500 symbols of the Confederacy, including 700 monuments and statues, in public spaces across the United States, the Southern Poverty Law Center said.

The large majority of these were erected long after the Civil War ended in 1865. Many went up early in the 20th century during a backlash among segregationists against the civil rights movement.

More than a half-dozen have been taken down since last week.