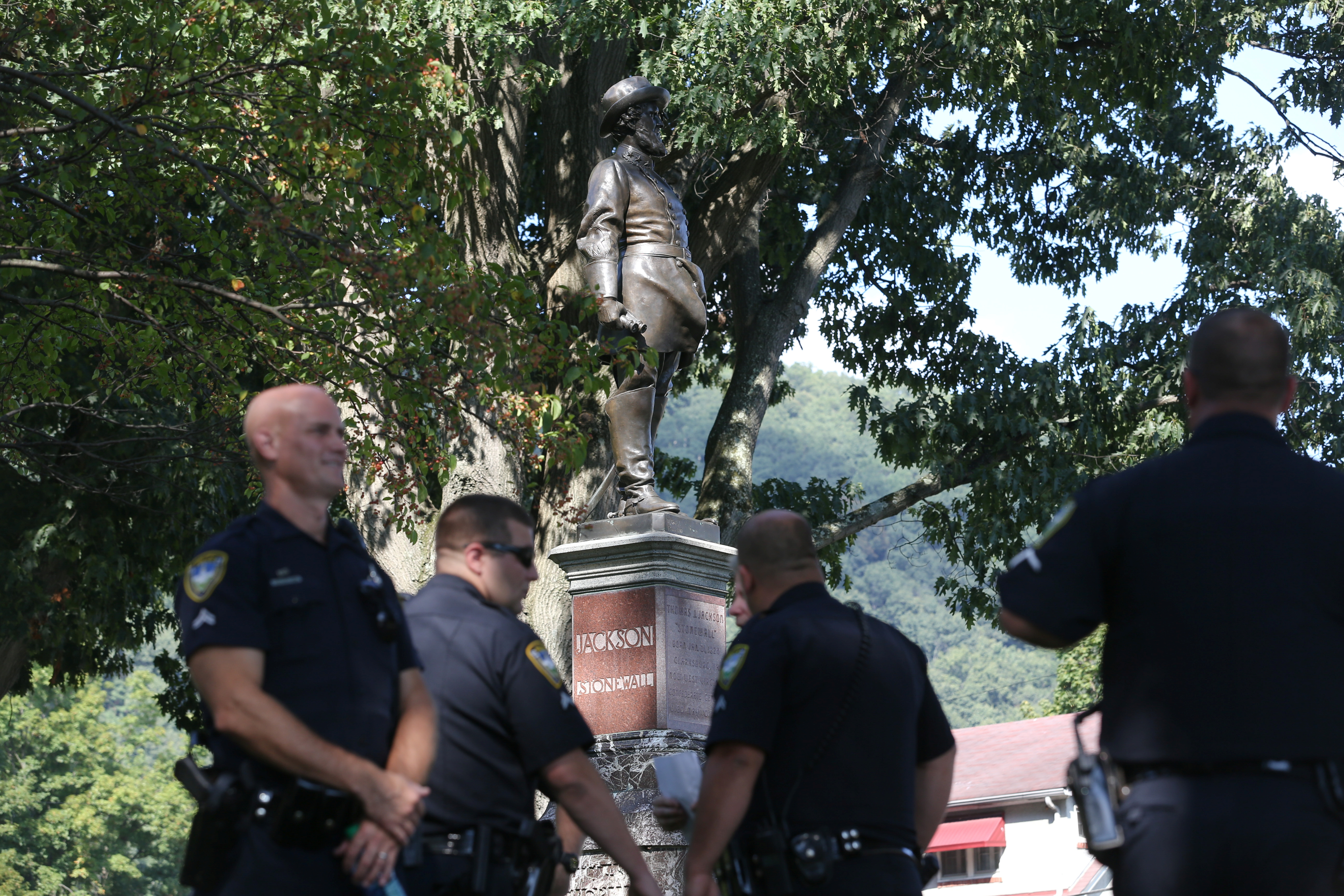 (Reuters) – Charlottesville, Virginia, has decided to remove another Confederate general’s statue from a park, a city spokeswoman said on Wednesday, just weeks after a woman died during protests over a decision to remove a statue of General Robert E. Lee.

Council members on Tuesday night unanimously ordered a statue of General Thomas “Stonewall” Jackson to be removed from a park in the city’s historic downtown district “as soon as possible,” spokeswoman Miriam Dickler said by phone.

The vote will have no immediate effect. A court has blocked the removal of the Lee statue from another park pending the outcome of a legal challenge that will likely now include the Jackson statue, Dickler said.

An August rally organized by white nationalists to protest the planned removal of the Lee statue turned deadly, when counter-protester Heather Heyer, 32, was killed by a car driven into a crowd.

The violence stemmed from a heated national debate about whether Confederate symbols of the U.S. Civil War represent heritage or hate. In the wake of the rally, other cities have acted to taken down monuments to the Confederacy.

The Dallas City Council voted on Wednesday to remove a statute of Lee from a city park. In Washington, D.C., the National Cathedral’s governing body said it had decided to immediately remove two stained glass windows honoring Lee and Jackson.

Those defending Charlottesville’s Lee statue in court argue that only the state can authorize its removal because it is covered by a Virginia war memorial statute. The city says it is city property and “not actually a war memorial as spelled out in code,” Dickler said.

The resolution passed by the city council on Tuesday calls for the Jackson statue to be removed “in a manner that preserves the integrity of the sculpture” and to be sold or transferred to an entity that preferably would display it in an educational, historic or artistic context.

Both Confederate statues are shrouded in black fabric following a council vote to reflect the city’s mourning after the death of the counter-protester last month.

Charlottesville Mayor Mike Signer has urged the Virginia legislature to go into special session to let localities decide the fate of the statues.

But Virginia Governor Terry McAuliffe said that would be redundant because the statue’s fate is already subject to litigation, though he added he hoped the court will rule in the city’s favor. 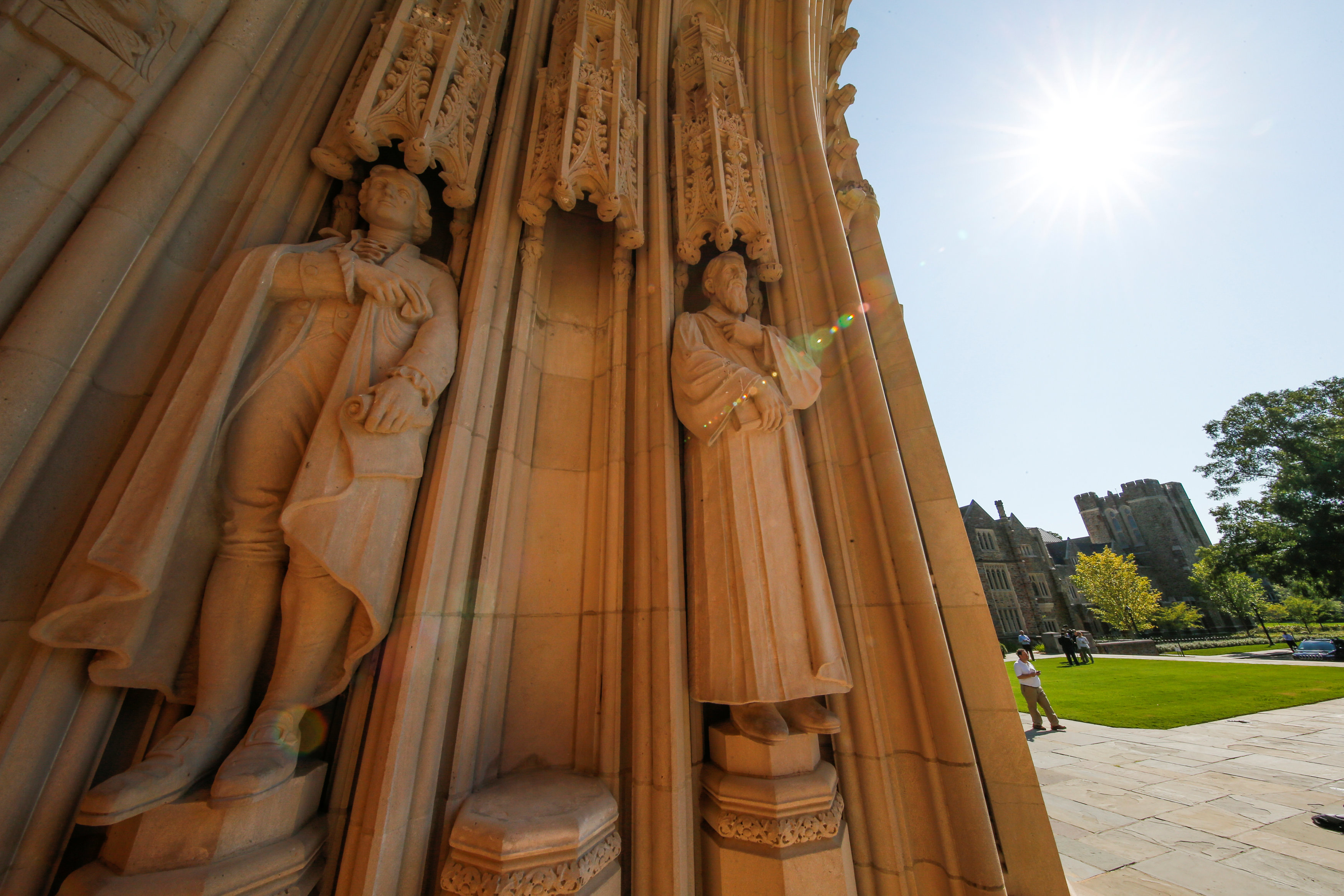 (Reuters) – Duke University removed a statue of Confederate General Robert E. Lee from the entrance of a chapel on the Durham, North Carolina, campus, officials said on Saturday, days after it was vandalized.

The decision to take down the statue followed discussions among students, faculty, staff and alumni about maintaining safety on campus, university President Vincent E. Price said in a statement.

“I took this course of action to protect Duke Chapel, to ensure the vital safety of students and community members who worship there, and above all to express the deep and abiding values of our university,” Price said.

The prestigious university will preserve the statue of Lee, who led Confederate forces in the American Civil War of 1861-1865, and use it as an educational tool so that students can study “Duke’s complex past,” Price added.

The Confederacy, comprised of 11 Southern states, broke from the Union largely to preserve the institution of slavery.

Symbols of the Confederacy have come into focus since last weekend, when white nationalists, angered at the planned removal of a statue of Lee from a park in Charlottesville, Virginia, engaged in violent protests where a counter-protester was killed.

The Robert E. Lee statue, one of 10 outside Duke Chapel, was vandalized and defaced late on Wednesday night. Campus security discovered the damage early Thursday, according to university officials. The incident was under investigation.

“Wednesday night’s act of vandalism made clear that the turmoil and turbulence of recent months do not stop at Duke’s gates,” Price said.

“We have a responsibility to come together as a community to determine how we can respond to this unrest in a way that demonstrates our firm commitment to justice, not discrimination,” he said.

Duke will form a committee to advise the school on how to properly memorialize historical figures on campus, and to recommend teaching programs, exhibitions and forums to explore its past.

There are more than 1,500 symbols of the Confederacy, including 700 monuments and statues, in public spaces across the United States, the Southern Poverty Law Center said.

The large majority of these were erected long after the Civil War ended in 1865. Many went up early in the 20th century during a backlash among segregationists against the civil rights movement.

More than a half-dozen have been taken down since last week. 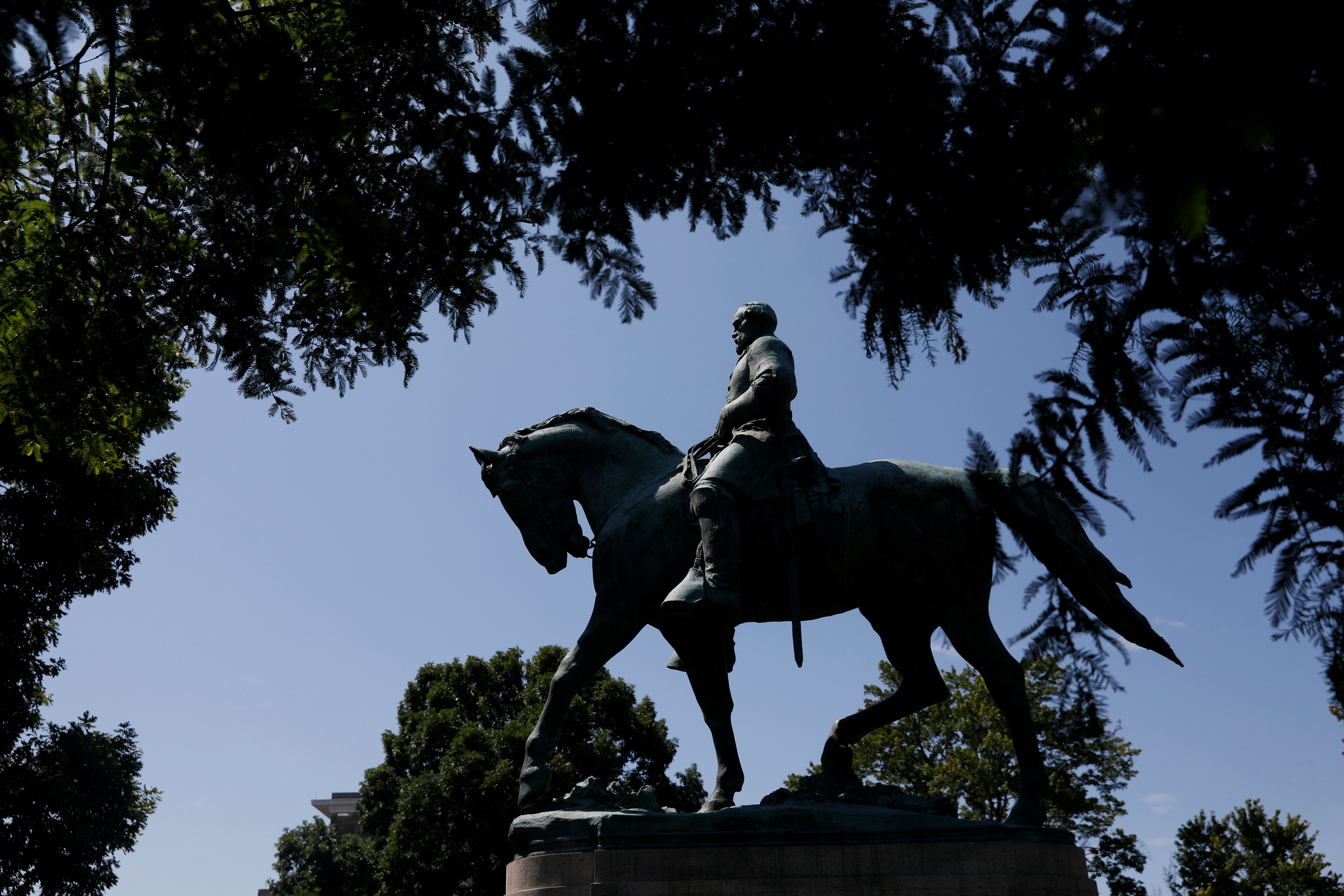 RICHMOND, Va. (Reuters) – The mayor of Charlottesville called on Friday for a special session of Virginia’s legislature to let localities decide the fate of Confederate monuments like the statue at the center of a far-right rally last week that turned deadly.

Mayor Mike Signer issued his appeal amid an increasingly contentious debate over what to do with memorials to Confederate figures, who fought for the preservation of slavery during the U.S. Civil War, that are seen by opponents as offensive.

In what has become the biggest domestic crisis of his presidency, Donald Trump has been sharply criticized, including by fellow Republicans, for blaming Charlottesville’s violence not only on the white nationalist rally organizers, but also the anti-racism activists who opposed them.

“Whether they go to museums, cemeteries, or other willing institutions, it is clear that they no longer can be celebrated in shared civic areas,” Signer said in a statement, referring to the statues. “We can, and we must, respond by denying the Nazis and the KKK (Ku Klux Klan) and the so-called alt-right the twisted totem they seek.”

A 32-year-old woman, Heather Heyer, was killed and several people were injured when a man crashed a car into a crowd of counter-protesters at last Saturday’s rally.

A 20-year-old Ohio man has been charged with her murder. On Friday, he was handed five new felony counts of malicious wounding, with the charges related to serious injuries inflicted on people hit by the vehicle, Charlottesville police said.

Some attendees at the rally were heavily armed, and Signer said in his statement he was also calling for legislation that would let localities ban open or concealed carry of weapons at some public events. And he said he wanted to find a way to memorialize Heyer’s name and legacy.

Heyer’s mother told a memorial service on Thursday that her daughter’s killers tried to silence her. “Well guess what? You just magnified her,” Susan Bro told the service.

Signer said that memorial was a profound turning point for him, and that it made him realize the significance of the city’s statue of Confederate General Robert E. Lee had changed.

“Its historical meaning now, and forevermore, will be a magnet for terrorism,” the mayor said in his statement.

In many places, Confederate monuments have become rallying points for white nationalists. Efforts to remove many such statues have been stepped up since the Charlottesville rally, which was called by far-right groups to protest against plans to remove the Lee statue.

In Maryland on Friday, authorities took down a statue of a 19th century chief justice, Roger Taney, who wrote an infamous 1857 ruling known as the Dred Scott decision that reaffirmed slavery and said black people could not be U.S. citizens.

Trump on Thursday decried the removal of such monuments, drawing stinging rebukes from fellow Republicans in a controversy that inflamed racial tensions nationwide.

The mother of Heyer, the woman killed in Charlottesville, said in a television interview on Friday that after Trump’s comments, “I’m not talking to the president now.”

“You can’t wash this one away by shaking my hand and saying, ‘I’m sorry.’ I’m not forgiving him for that,” Susan Bro told ABC’s “Good Morning America.”

There are more than 1,500 symbols of the Confederacy in public spaces across the United States, with 700 of those being monuments and statues, the Southern Poverty Law Center said.

The large majority of these were erected long after the Civil War ended in 1865, according to the center, with many going up early in the 20th century amid a backlash among segregationists against the civil rights movement.

More than half a dozen have been taken down since Saturday. 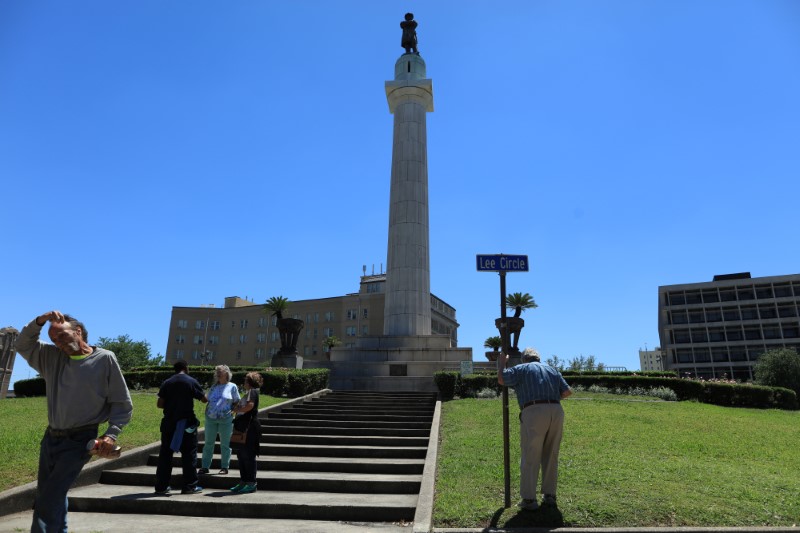 NEW ORLEANS (Reuters) – New Orleans will remove a statue on Friday of Confederate military leader Robert E. Lee, the last of four monuments the city is taking down because they have been deemed racially offensive, officials said.

Since May 11, crews have removed monuments to Jefferson Davis, president of the pro-slavery Confederacy and P.G.T. Beauregard, a Confederate general.

Last month, a monument was taken down that commemorated an 1874 attack on the racially integrated city police and state militia by a white supremacist group called the “Crescent City White League”.

Crews will remove the statue of Robert E. Lee, who was the top military leader in the Confederacy, on Friday sometime after 9 a.m., the city said in a statement.

Earlier this month, dozens of supporters of the monuments clashed with hundreds of demonstrators near the site of the Robert E. Lee statue.

New Orleans Mayor Mitch Landrieu is expected to give a speech marking the removal of the last of the four monuments on Friday afternoon.

The monuments that pay homage to the Confederacy, made up of states which attempted to preserve slavery in the South and secede from the United States in the Civil War of 1861 to 1865, have been denounced by critics as an affront to the ideals of multi-racial tolerance and diversity in the majority-black Louisiana city.

But doing away with them has met with staunch resistance from groups who argue the statues are nevertheless important symbols of the city’s Southern heritage.

Statues and flags honoring the Confederacy have been removed from public spaces across the United States since 2015, after a white supremacist murdered nine black parishioners at a South Carolina church.

In 2015, New Orleans decided to take down the four monuments, and a U.S. appeals court ruled in March that it had the right to proceed.