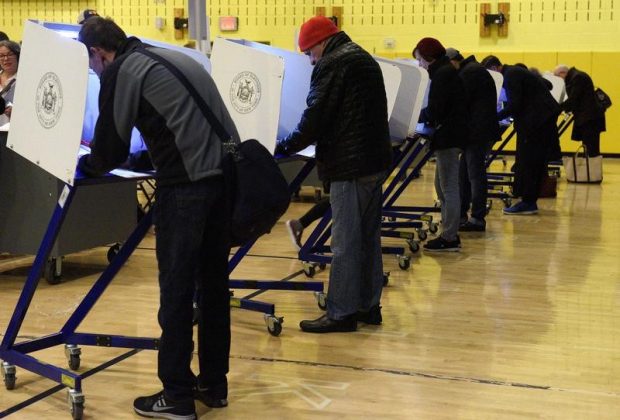 Charles Evans, head of the Chicago Fed, waded into the fiscal policy debate just as polls opened. An outspoken dove at the central bank, he said his prediction of 1.75 to 2 percent future economic growth was “informed by some assessment of what policies we are likely to entertain” out of Washington.

The Fed, which is expected to raise rates before year end, has occasionally emerged as an issue in the divisive campaign between front runners Hillary Clinton and Donald Trump. Trump, a Republican, said Fed Chair Janet Yellen was keeping rates low to boost President Barack Obama, a Democrat.

The Fed typically avoids prescribing fiscal policies, though its members have been more strident as their plans for a more aggressive policy tightening fizzled in the face of sub-par growth this year.

“Fiscal policy, if it were more stimulative and if it could be directed into more socially productive uses (like) infrastructure investments that strike me as something we need to do anyway, why not do it when interest rates are lower,” Evans said at a Council on Foreign Relations breakfast.

“That would end up probably increasing real rates too and that would help all of us out.”

Clinton has pledged to unveil a plan to rebuild U.S. infrastructure during her first 100 days, saying this would create new jobs. Trump has proposed increasing spending on the U.S. military and infrastructure but says he would reduce spending on other categories by 1 percent each year.

“There is a real risk if we focus too much on the debt,” Evans said, adding that fiscal policies “might incent certain types of investments or innovations.”

“If you’re restricting labor input so that we’re not going to get growth … it’s just simple arithmetic that’s going to be limiting to what our possibilities are,” he added.

Turning to the Fed’s 2-percent inflation mandate, Evans noted a preferred price measure is now up to 1.7 percent.

“We’re close, we’re getting there, and if I had even more confidence that we were going to get to 2 percent then I’d feel better about monetary policy normalization,” he said.

But there remain “reasons to be nervous about inflation,” including low expectations and the tendency of prices to be “inertial” after years below target, he said.