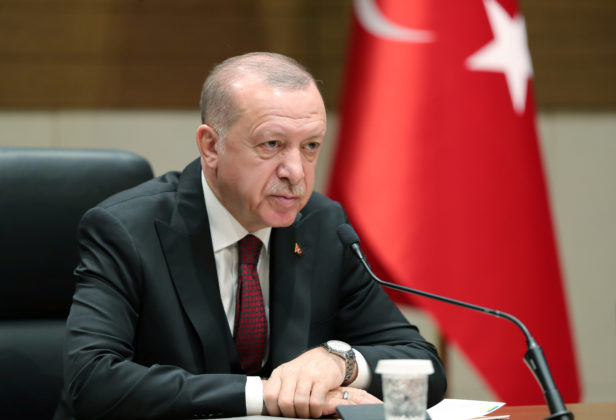 By Orhan Coskun and Daren Butler

ANKARA/ISTANBUL (Reuters) – Turkey said on Monday it struck dozens of Syrian government targets after five of its soldiers were killed in northwest Syria’s Idlib region, an incident that could test ties between Moscow and Ankara.

President Tayyip Erdogan said initial indications showed 30-35 Syrians were “neutralized” in Turkey’s response to what it called intense shelling of its soldiers in Idlib, the last major Syrian rebel stronghold after nearly nine years of war.

Turkey has reinforced Idlib, which lies just across its southern border with Syria, in a challenge to Damascus and its Russian backers.

Erdogan said Turkey had told Russian counterparts “they need to stand aside” in the escalating conflict, in which Ankara and Moscow back opposing sides.

Syrian President Bashar al-Assad’s forces, backed by Russian air power, have made large advances in Idlib, prompting Turkey to warn it may launch a military operation there unless the fighting is halted.

Rebels fighting to oust Assad, some of whom have been backed by Turkey, have also launched counter-attacks against the territorial gains by Assad’s forces.

“We have responded in kind to these attacks and will continue to do so, whether it is with our artillery or mortars,” Erdogan told reporters in Istanbul.

“We are determined to continue our operations for the security of our country, people and our brothers in Idlib,” he said before a flight to Kiev. “Those who question our determination will soon understand they made a mistake.”

A Turkish security official told Reuters the shelling that killed the soldiers occurred in the area of Saraqeb, a town 15 km (9 miles) to the east of Idlib city. Saraqeb lies at the junction of two main roads that Damascus seeks to fully control.

“Following the developments in Idlib in recent weeks, serious support was provided over the weekend to the troops, equipment and vehicles in the region,” the official said.

Turkey, which already hosts 3.6 million refugees from Syria, fears a fresh wave of migrants from Idlib. It has 12 military observation posts around the region, set up under a 2017 agreement with Russia and Iran.

Erdogan accuses Russia of violating a 2017 “de-escalation” agreement to reduce fighting in the region, a charge Moscow denied on Friday.

“Units of Turkish troops made movements inside the de-escalation zone … without notifying the Russian side, and came under fire from Syrian government forces on terrorists in the area to the west of Saraqib,” Russia’s defense ministry said.

The Syrian Observatory, a UK-based war monitor, said 13 members of the Syrian government forces were killed in Turkish shelling, even while a Syrian state TV correspondent said there had been no casualties among its government forces.

On Sunday the Observatory said some 320 Turkish trucks and military vehicles entered Idlib at Kafr Lusin crossing on Sunday, much more than usual, and went south.

Turkey’s defense ministry said Syrian shelling was carried out against its reinforcements, which were meant to prevent clashes in Idlib, despite prior coordination of their positions.

Erdogan said if talks between diplomats and generals fail to get results he will contact Russian President Vladimir Putin directly to try to resolve the situation.

“We told especially Russian counterparts that they are not our counterparts here, that it is the (Syrian) regime directly, and that they need to stand aside,” Erdogan said. “This is not okay, we are giving martyrs here, but our armed forces and our artillery … are keeping them under fire.”

He added F-16s are involved in Turkey’s operation against 40 points in Idlib.

However, the Russian defense ministry said Turkish planes did not violate Syria’s border and no air strikes on Syrian troops were recorded.