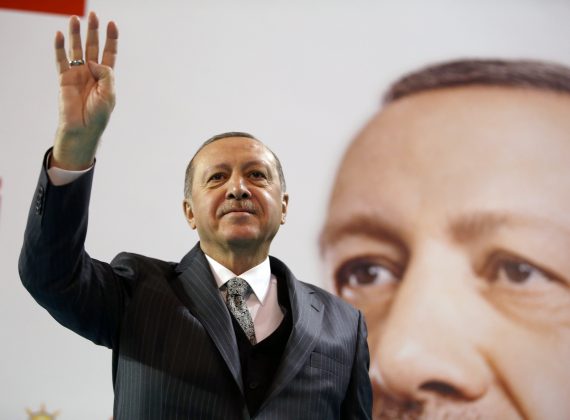 By Gabriela Baczynska and Robin Emmott

BRUSSELS (Reuters) – European Union leaders are so discomfited by their relationship with Turkey these days that they relegated their summit next month to Varna, a Bulgarian Black Sea port, rather than hold it in Brussels.

But despite their wariness over President Tayyip Erdogan, who has cracked down hard on critics at home and lashed out at the West, they need him too much to turn their backs.

Turkish and European Union officials both expect an uneasy atmosphere at the summit on March 26. But the European hosts will have little choice but to hear Erdogan out as he asks for more money for Syrian refugees, a deeper customs union and progress in talks on letting Turks visit Europe without visas.

On the one hand, European leaders have robustly criticized Turkey for what they see as rapid backsliding on democracy and human rights, especially during a crackdown in the wake of a failed coup in 2016. Some of Erdogan’s hostile rhetoric toward Europe last year, including comparing the Dutch and German governments to Nazis, has been, for EU leaders, beyond the pale.

But on the other hand, European countries still rely on Turkey as a NATO ally on Europe’s southern flank. And an EU deal with Erdogan that halted the mass influx of Syrian refugees into the bloc means the Turkish leader is like an estranged relative that you can’t disinvite from a family dinner, no matter how badly you think he has behaved.

“You intensely dislike the person you have in front of you, but you just cannot do without him,” said Marc Pierini, a former EU ambassador to Turkey and now an analyst at Carnegie Europe think-tank.

Turkey says it is in Europe’s interest to be warm.

“If the EU gives positive signals to Turkey, the more Turkey will do in terms of reforms,” said Ankara’s envoy to the European Union, Faruk Kaymakci.

“But the more the EU isolates Turkey, the more inward-looking and nationalist it will turn,” he told reporters, calling for more “trust and confidence at the top level”.

A senior EU official said Turkey had sought to have the summit in Brussels, but the bloc decided to hold it in Varna instead to lower its profile. Bulgaria, Turkey’s neighbor, has better relations with Ankara than some other EU states and holds the rotating EU presidency for the first half of 2018.

The senior EU official described European Commission President Jean-Claude Juncker, who will chair the Varna meeting with European Council President Donald Tusk, as furious over Erdogan’s crackdown. Some 50,000 people, including journalists, have been arrested and 150,000, including teachers, judges and soldiers, sacked or suspended from their jobs.

“For the EU, this is incredibly uncomfortable. They are backsliding on everything,” the senior EU official said.

Juncker has warned Turkey that it cannot count on any significant rapprochement with the EU as long as it keeps journalists in jail.

The Netherlands formally withdrew its ambassador to Ankara this month, after 2017 was marked by Erdogan calling German and Dutch officials “fascists” for stopping rallies in support of a referendum in Turkey to grant Erdogan broader powers. Germany is particularly angry that some German citizens are among those arrested in Erdogan’s purge.

Turkey is still a candidate to join the EU, having applied decades ago. But after years of on-and-off progress, including under Erdogan who first took power in 2003, the EU froze the accession talks over the crackdown since the botched coup.

Brussels is deeply skeptical that Ankara would reverse the crackdown to deliver the democratic and judicial reforms that would be required to restart those negotiations.

But Kaymakci, the Turkish envoy, said he still hoped the bloc would commit another 3 billion euros ($3.7 bln) for Syrian refugees in Turkey at the Varna summit, and move forward with talks on letting Turks enter Europe without visas.

EU officials say Turkey does not meet criteria for visa-free travel. When it comes to money for refugees, the bloc is looking at how to accommodate Turkey, acknowledging its role in hosting them and committing to look into funding.

Turkey’s request to deepen its customs union, which already allows tariff-free trade with the EU for most goods, is also likely to be politely rebuffed. Germany in particular has opposed further talks on customs for now.

The price Erdogan will have to pay for being invited to Varna, EU officials say, will be listening to his hosts speak frankly. Just weeks after the summit, the European Commission will release what is certain to be a damning report on the situation in Turkey.