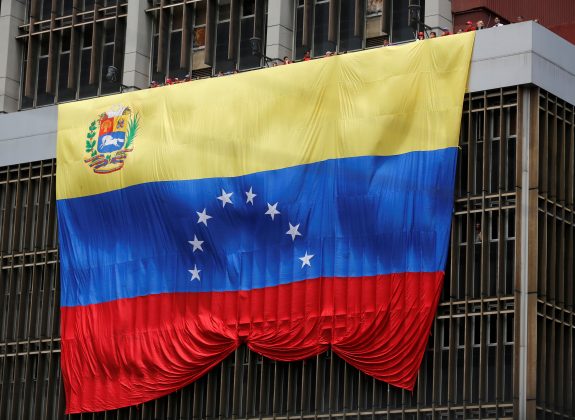 WASHINGTON (Reuters) – As the United States makes its biggest diplomatic push in Latin America in years to try to oust Venezuelan President Nicolas Maduro, the U.S. military is zeroing in on a byproduct of the crisis: a strengthening of Colombian rebels on both sides of Venezuela’s border.

U.S. Admiral Craig Faller, the head of the U.S. military’s Southern Command that oversees U.S. forces in Latin America, told Reuters the United States had sharpened its focus on the rebels and increased its sharing of intelligence with Colombian officials.&nbsp;

U.S. officials see a growing threat from both Colombia’s National Liberation Army (ELN) and factions of the Revolutionary Armed Forces of Colombia (FARC) that refuse to adhere to a 2016 peace agreement to end five decades of civil war.

The United States believes the rebels are taking advantage of Venezuela’s crisis to expand their reach in that country and the scope of long-standing illegal activities, including drug trafficking.

“Our principal role working with our Colombian partners is to assist in intelligence sharing. What we know, we share,” Faller said. Asked whether the intelligence sharing on the rebels had ramped up as Venezuela’s crisis deepened, Faller responded: “Absolutely.”

The risks from the insurgents on both sides of the Colombia-Venezuela border add another layer of complexity to the crisis in Venezuela, where U.S. President Donald Trump says all options are on the table to remove Maduro from office.

At the same time, he noted that no U.S. allies in the region were seeking a military solution to the crisis in Venezuela.

“My job is to be ready, be on the balls of my feet, at all times. But we’ve been talking to our partners and no one, no one, thinks that a military option is a good idea,” Faller said.

Opposition leader Juan Guaido says the May 2018 vote in which Maduro won a second term was a sham and he invoked a constitutional provision on Jan. 23 to assume the interim presidency. Most Western nations including the United States have backed Guaido as head of state.

Maduro, a socialist who has denounced Guaido as a U.S. puppet seeking to foment a coup, retains the support of the armed forces and control of state functions.

Jeremy McDermott, a Colombia-based expert on the insurgencies and co-founder of the Insight Crime think tank, said he believed the Colombian insurgents were operating in Venezuela with at least the blessing of Maduro.

The rebels’ aim is to exploit Venezuela’s lawlessness for safe haven and for economic gain, he said. But he noted there could be an added benefit for Maduro.

“If the Americans invade, or if Colombia promotes a military intervention, then they (Maduro’s supporters) would be able to call upon an insurgent force with more than 50 years of combat experience,” McDermott said.

Asked whether the United States had any evidence of communications between Maduro and the guerrilla groups, Faller said: “I’d rather not discuss the details of the exact connections but we’re watching it very closely.”

Venezuela’s Information Ministry and ELN contacts did not immediately respond to requests for comment.

Colombia’s ambassador to Washington, former Vice President Francisco Santos, said ELN and FARC factions had long been present in Venezuela but had grown stronger and more integrated into the country as a result of Venezuela’s crisis.

“They have become the paramilitary groups of the Maduro administration,” Santos told Reuters.

A Cuba-inspired Marxist insurgency formed in 1964, the ELN claimed responsibility for a January car bomb attack against a police academy in Bogota that killed 22 cadets. It was an escalation by insurgents who have kidnapped Colombian security forces, attacked police stations and bombed oil pipelines.

U.S. officials, speaking on condition of anonymity, say the ELN is increasingly using Venezuelan territory to carry out narco-trafficking and illegal mining of minerals like gold and coltan.

The Venezuelan security forces were believed to be getting kickbacks from the guerrillas, they said.

One U.S. official, speaking on condition of anonymity, said the U.S. collection of intelligence on the guerrilla groups had increased in recent weeks, including looking at the militants’ activities on the Venezuelan side of the border with Colombia.

Several U.S. officials said they believed senior leaders of both the ELN and the so-called FARC dissidents who do not adhere to the peace agreement were now located inside of Venezuela.

“Their leadership is there,” a second U.S. official said, who also declined to be named, without providing evidence.

An International Crisis Group report cited estimates that the ELN had been active in a minimum of 13 of Venezuela’s 24 states, “absorbing new recruits and shifting from a guerrilla force that embraced armed resistance against Colombia&rsquo;s ruling elites to one with many core operations in Venezuela.”

Opposition lawmakers in Venezuela also regularly denounce growing ELN activities in Venezuela, but Reuters has been unable to independently verify the extent of its presence or its operations.

Faller declined to discuss any specifics about the collection of U.S. intelligence or identify which insurgent leaders were in Venezuela.

But he acknowledged the trend and added that the flow of illegal narcotics “from Colombia into Venezuela, and then from Venezuela out in the region, has risen as the misery of the Venezuelan people has risen.”

“It’s essentially a lawless region now inside Venezuela along the border and the FARC dissidents and the ELN have taken advantage of that,” Faller said, adding: “They operate with impunity inside Venezuela.”

Santos said the big concern for Colombia was that the strengthening rebel forces would upend efforts to crack down on narcotics trafficking.

“That’s a big worry because in this situation of chaos, obviously, they are going to grow. They are growing,” he said.

(Reporting by Phil Stewart; Additional reporting by Brian Ellsworth in Caracas and Helen Murphy in Bogota; Editing by Mary Milliken and Peter Cooney)