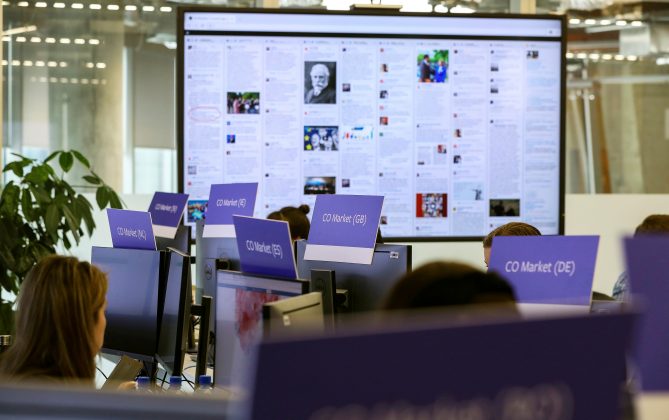 BRUSSELS (Reuters) – The European Union has called on Facebook and other platforms to invest more in fact-checking, but a new study shows those efforts may rarely reach the communities worst affected by fake news.

The analysis by big-data firm Alto Data Analytics over a three-month period ahead of this year’s EU elections casts doubt on the effectiveness of fact-checking even though demand for it is growing.

Facebook has been under fire since Russia used it to influence the election that brought Donald Trump to power. The company quadrupled the number of fact-checking groups it works with worldwide over the last year and its subsidiary WhatsApp launched its first fact-checking service.

The EU, which has expanded its own fact-checking team, urged online platforms to take greater action or risk regulation.

Fact-checkers are often journalists who set up non-profits or work at mainstream media outlets to scour the web for viral falsehoods. Their rebuttals in the form of articles, blog posts and Tweets seek to explain how statements fail to hold up to scrutiny, images are doctored or videos are taken out of context.

But there is little independent research on their success in debunking fake news or prevent people from sharing it.

“The biggest problem is that we have very little data … on the efficacy of various fact-checking initiatives,” said Nahema Marchal, a researcher at the Oxford Internet Institute.

“We know from a research perspective that fact-checking isn’t always as efficient as we might think,” she said.

Alto looked at more than two dozen fact-checking groups in five EU nations and found they had a minimal online presence – making up between 0.1% and 0.3% of the total number of retweets, replies, and mentions analyzed on Twitter from December to March.

The Alto study points to a problem fact-checkers have long suspected: they are often preaching to the choir.

It found that online communities most likely to be exposed to junk news in Germany, France, Spain, Italy and Poland had little overlap with those sharing fact-checks.

The European Parliament election yielded a patchwork of results. The far-right made gains but so did liberal and green parties, leaving pro-European groups in control of the assembly.

The EU found no large-scale, cross-border attempts to sway voters but warned of hard-to-detect home-grown operations.

Alto analyzed abnormal, hyperactive users making dozens of posts per day to deduce which political communities were most tainted by suspect posts in each country.

Less than 1% of users – mostly sympathetic to populist and far-right parties – generated around 10% of the total posts related to politics.

They flooded networks with anti-immigration, anti-Islam and anti-establishment messages, Alto found in results that echoed separate studies by campaign group Avaaz and the Oxford Internet Institute on the run-up to the European election.

Fact-checkers, seeking to counter these messages, had little penetration in those same communities.

In Poland – where junk news made up 21% of traffic compared to an average of 4% circulating on Twitter in seven major European languages over one month before the vote, according to the Oxford study – content issued by fact-checkers was mainly shared among those opposed to the ruling Law and Justice party.

The most successful posts by six Polish fact-checkers scrutinized campaign finance, the murder of a prominent opposition politician and child abuse by the Catholic church.

Italy, where an anti-establishment government has been in power for a year, and Spain, where far-right newcomer Vox is challenging center parties, also saw content from fact-checkers unevenly spread across political communities.

More than half of the retweets, mentions or replies to posts shared by seven Italian fact-checking groups – mostly related to immigration – came from users sympathetic to the center-left Democratic Party (PD).

Only two of the seven groups had any relatively sizeable footprint among supporters of Deputy Prime Minister Matteo Salvini’s far-right League party, which surged to become the third-biggest in the new EU legislature.

Italian fact-checker Open.Online, for example, had 4,594 retweets, mentions or replies among PD sympathizers compared to 387 among League ones.

French fact-checking groups, who are mostly embedded in mainstream media, fared better. Their content, which largely sought to debunk falsehoods about President Emmanuel Macron, was the most evenly distributed across different online communities.

In Germany, only 2.2% of Twitter users mapped in the study retweeted, replied or mentioned the content distributed by six fact-checking groups.

Alto’s research faces constraints. The focus on publicly available Twitter data may not accurately reflect the whole online conversation across various platforms, the period of study stops short of the May elections, and there are areas of dispute over what constitutes disinformation.

It also lacks data from Facebook, which is not alone among internet platforms but whose dominance puts it in the spotlight.

Facebook says once a post is flagged by fact-checkers, it is downgraded in users’ news feeds to limit its reach and if users try to share it, they will receive a warning. Repeat offenders will see a distribution of their entire page restricted resulting in a loss of advertising revenue.

“It should be seen less, shared less,” Richard Allen, Facebook’s vice president for global policy, told reporters visiting a “war room” in Dublin set up to safeguard the EU vote.

Facebook cites free speech concerns over deleting content. It will remove posts seeking to suppress voter turnout by advertising the wrong date for an election, for example, but says in many other cases it is difficult to differentiate between blatantly false information and partisan comment.&nbsp;

“We don’t feel we should be removing contested claims even when we believe they may be false,” Allen said. “There are a lot of concepts being tested because we don’t know what is going to work.”

As the rapid spread of fake news on social media has raised the profile of fact-checking groups, it is forcing them to rethink how they work.

If they once focused on holding politicians to account, fact-checkers are now seeking to influence a wider audience.

Maldita.es focuses largely on WhatsApp and asks people to send fact-checks back to those in their networks who first spread the fake news.

“You need to try to reach real people,” said Jimenez, who also aims to promote better media literacy. “One of the things we have been asked several times is whether people can get pregnant from a mosquito bite. If people believe that, we have a bigger issue.”