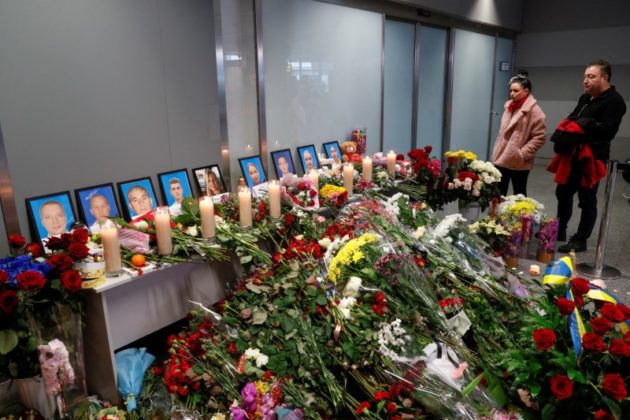 FILE PHOTO: People mourn in front of a memorial for the flight crew members of the Ukraine International Airlines Boeing 737-800 plane that crashed in Iran, at the Boryspil International airport outside Kiev, Ukraine January 11, 2020. REUTERS/Valentyn Ogirenko

By John Geddie and Aradhana Aravindan

SINGAPORE (Reuters) – Five nations whose citizens died when an airliner was shot down by Iran last week will meet in London on Thursday to discuss possible legal action, Ukraine’s foreign minister told Reuters.

Speaking at the sidelines of an official visit to Singapore on Monday, Vadym Prystaiko said the countries would also discuss compensation and the investigation into the incident. All 176 people on board the flight died in the crash on Wednesday, minutes after the plane took off from Tehran airport.

Prystaiko said suggestions from Iran that the Ukrainian International Airlines plane was downed as it flew near a sensitive military base during a time of heightened tensions were “nonsense”. He said Tehran had agreed to hand over the plane’s black boxes to Kiev for investigation.

“We have created this group of foreign ministers from the grieving nations. On Jan 16, we will meet in person in London to discuss the ways, including legal, how we are following this up, how we are prosecuting them (Iran),” Prystaiko said.

He said the five nations also included Canada – which had at least 57 passport holders aboard the doomed flight – Sweden, Afghanistan and a fifth country which he did not name. Canada has previously said that these four countries and Britain had established a coordination group to support victims’ families.

Many on board were Iranians with dual citizenship.

After days of denials, Iran said on Saturday its military had shot down the plane in a “disastrous mistake”. Prystaiko said Ukraine was not informed by Iran that it would be taking responsibility before that public announcement.

Tehran said its air defenses were fired in error while on alert after Iranian missile strikes on U.S. targets in Iraq, and that the airliner was mistaken for a “hostile target” after it turned toward a sensitive military base of the elite Revolutionary Guards near Tehran.

“This is nonsense because our plane was recorded and confirmed – was going within the international route which was given by the dispatchers…Nothing was extraordinary,” Prystaiko said, adding that investigators said the pilot’s last words were “everything is ok on board and I am switching to auto pilot.”

“I have seen this information on media that our plane changed the route…Yes, because it was hit by rocket! It was already dying.”

Iran’s Revolutionary Guards, in a rare step, apologized to the nation and accepted full responsibility. Senior Guards commander Amirali Hajizadeh said he had informed Iran’s authorities on Wednesday about the unintentional strike, a comment that raised questions about why officials had publicly denied it for so long.

Prystaiko said all involved had to be held to account.

“What we don’t want is somebody like the soldier, very low level, to be pointed and told that that is the guy who pushed the button…This is the Iranian government’s responsibility,” he said, speaking in English.

“We have to dig out who gave the order, who pushed the button. Everything…all these people should be punished.”

He said that Ukrainian investigators – many of whom were involved when a Malaysian airliner was shot down over eastern Ukrainian territory held by Russia-backed separatists in 2014 – should be central to the investigation.

“We want to have the full investigation of the recordings on the black boxes themselves to be done by Ukrainian specialists,” he said, adding that France and the aircraft manufacturer Boeing should also be involved.

“They (Iran) committed to give it (black boxes) to us. What we are not having is a particular date when it will happen. We are pushing for immediate release of the black boxes.”

(Reporting by John Geddie and Aradhana Aravindan in Singapore; Editing by Peter Graff)