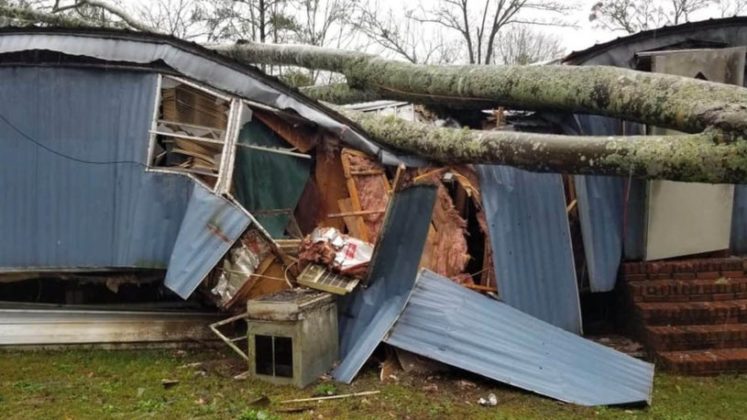 (Reuters) – At least 10 people died, more than 1,000 flights were canceled and hundreds of thousands were without power in five states on Saturday as a massive winter storm system dumped snow, freezing rain and hail from Texas to Michigan.

Hurricane-force wind gusts, golf-ball-sized hail and 2 to 5 inches (5-13 cm)of snow fell on Friday night and early Saturday as storms pushed from Texas through the Southeast and Great Lakes into Maine, the National Weather Service (NWS) said.

More snow with accumulations between 6 to 12 inches was expected through Sunday in parts of Illinois, Michigan, northern New York and New England.

More than half an inch of ice was predicted to cake highways and roads across the South and Northeast from Saturday night to Sunday morning, he said.

“The ice and wind will make driving treacherous, and trees can snap and knock out power and do other damage,” he said.

Two people were killed when the storm destroyed a trailer home in northwestern Louisiana late Friday, according to the Bossier Parish Sheriff’s Office. Local media reported that a third person died after a tree fell on a home in that state.

A fourth person was killed Friday in the storms when a car slide off the road and into a creek in Dallas, NBC news reported.

A firefighter and a police officer in Lubbock, Texas, were killed Saturday after a car slid on ice-slicked U.S. Interstate Highway 27 as they were investigating a traffic accident, Lubbock Fire officials said.

A 10th person died in southeastern Oklahoma on Saturday morning after the 58-year-old man was swept away while his pickup truck was stalled in deep water on a flooded road, the Houston Chronicle reported.

More than 257,000 homes and businesses were without power across Alabama, Mississippi, Kentucky, Tennessee and Arkansas according the tracking site PowerOutage.us. Heavy outages in Texas, Michigan and Illinois were largely repaired by late Saturday afternoon.

The bulk of the nation’s flight delays and cancellations were at Chicago’s O’Hare International Airport, with more than 1,000 flights canceled and hundreds more delayed, according to flightaware.com.

Tornadoes damaged or destroyed some buildings in Arkansas and Missouri, forecasters said.

NWS said more than 18 million people in Louisiana, Arkansas, Texas and Oklahoma remained at risk of tornadoes and flooding rains. Oravec said that hurricane-force wind gusts of about 75 mph (120 kph) hit the southeast.

As the system pushes eastward, rain should end overnight in many southern states, but the Northeast and New England can expect severe weather to last for another day, he said.

(Reporting by Rich McKay in Atlanta; Editing by Marguerita Choy and Cynthia Osterman)