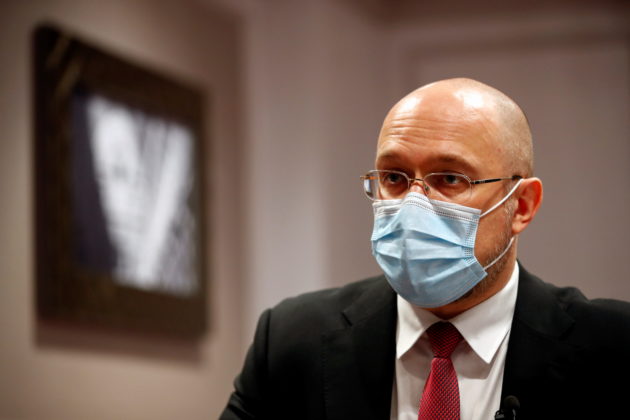 BRUSSELS (Reuters) – Ukraine Prime Minister Denys Shmygal accused Russia on Tuesday of being “absolutely” behind what he called an attempt to organize a coup to overthrow the pro-Western government in Kyiv, citing intelligence.

Last Friday, President Volodymyr Zelenskiy said Ukraine had uncovered a plot to topple his government this week, involving individuals from Russia, but he stopped short of saying whether he believed the Kremlin was behind the plot.

The Kremlin has denied any role in any coup plot and rejected as baseless other accusations that it has sought to destabilize Ukraine, a fellow former Soviet republic.

“We have secret data which demonstrates the special intentions (to foment a coup),” Shmygal said. Asked if the Russian state was behind it, he said: “Absolutely.”

He also said a Russian military build-up on Ukraine’s border, the second such surge since May, was part of a wider Russian effort to break Ukrainian momentum towards joining the European Union.

“They are preparing something,” Shmygal said of Russia, without elaborating.

Shmygal, who is in Brussels for talks with top EU officials, said Ukrainian intelligence had picked up activities of “outside powers” trying to influence political opposition within the country to stoke a popular uprising and coup.

Zelenskiy, a former actor who once played a fictional president in a popular sitcom, came to power with a landslide election victory in 2019 though his popularity has fallen after 2-1/2 years in power.

But Shmygal said: “In Ukrainian society, there is no revolutionary mood. We understand there was influence from outside to enforce protests in Kyiv, to make them stronger. Our secret service is making a special investigation.”

Shmygal also said the sacking this week of Oleksandr Rusnak, the head of the counterintelligence department of Ukraine Security Service (SBU), was unrelated.

He said Ukraine’s aspiration to join the EU was among the main reasons for what he said was Russian aggression, hybrid attacks, a military build-up on its border and Moscow’s 2014 annexation of Crimea. Ukraine has also been fighting a pro-Russian insurgency in the country’s east since 2014.

Ukrainians ousted a Russian-backed president in February 2014 in a pro-European uprising. Along with Moldova and Georgia, it hopes for the promise of closer ties with the EU at a special “Eastern Partnership” summit next month.

EU and other Western leaders are involved in a geopolitical tug-of-war with Russia for influence in Ukraine and two other ex-Soviet republics, Moldova and Georgia, through trade, cooperation and protection arrangements. Ukraine is also seeking more military support from the United States, Shmygal said.

“This is one of the main reasons for the hybrid attacks from the Russian side, because we strongly would like to be integrated into Europe, to have the standard of living of European, of civilized countries,” he said.

“That is why we have all these hybrid attacks, cyber attacks, physical military attacks, occupied territories, disinformation to hamper Ukraine’s European aspirations.”