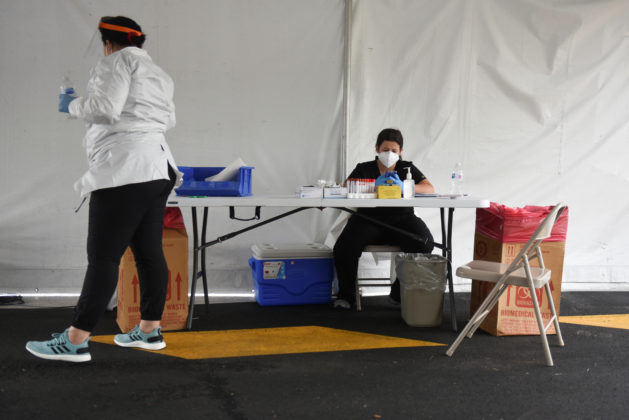 Medical workers coordinate testing as dozens of people wait in their cars at United Memorial Medical Center amid the global outbreak of the coronavirus disease (COVID-19), in Houston, Texas, U.S., June 23, 2020. REUTERS/Callaghan O'Hare

CHICAGO (Reuters) – Infectious disease experts, economists and politicians have raised concerns about a second wave of coronavirus infections in the United States that could worsen in the coming months.

But some, including Dr. Anthony Fauci, the U.S. government’s top infectious disease expert, said it is too soon to discuss a second wave when the United States has never emerged from a first wave in which more than 120,000 people have died and more than 2.3 million Americans have had confirmed infections with the novel coronavirus.

Here is an explanation of what is meant by a second wave.

WHY DESCRIBE DISEASE OUTBREAKS AS WAVES?

In infectious disease parlance, waves of infection describe the curve of an outbreak, reflecting a rise and fall in the number of cases. With viral infections such as influenza or the common cold, cases typically crest in the cold winter months and recede as warmer weather reappears.

Fears about a second wave of COVID-19, the respiratory disease caused by the coronavirus, stem in part from the trajectory of the 1918-1919 Spanish flu pandemic that infected 500 million people worldwide and killed an estimated 20 to 50 million people. The virus first appeared in the spring of 1918 but appears to have mutated when it surged again in the fall, making for a deadlier second wave.

“It came back roaring and was much worse,” epidemiologist Dr. William Hanage of Harvard University’s T.H. Chan School of Public Health said.

Epidemiologists said there is no formal definition of a second wave, but they know it when they see it.

U.S. COVID-19 cases spiked in March and April and then edged downward in response to social-distancing policies aimed at slowing the transmission of the virus from person to person. But unlike several countries in Europe and Asia, the United States never experienced a dramatic drop in cases marking the clear end of a first wave. There is now a plateau of about 20,000 U.S. cases daily.

“You can’t talk about a second wave in the summer because we’re still in the first wave. We want to get that first wave down. Then we’ll see if we can keep it there,” Fauci told the Washington Post last week.

The easing in recent weeks of social-distancing mandates in numerous U.S. states as businesses have reopened has caused an acceleration in infections.

IS TALK OF WAVES JUST SEMANTICS?

To many epidemiologists, it is a matter of semantics.

“Do you want to call it an extension of the first wave or a second wave superimposed on the first? You could argue it either way,” Justman said.

Dr. Eric Toner, a senior scientist at the Johns Hopkins Center for Health Security, said he does not find “waves” to be an especially useful term in describing a pandemic.

“When you’re underwater, it’s hard to tell how many waves are passing over your head,” Toner said.

Toner said current increases in U.S. cases have less to do with the virus and more to do with people’s behavior.

“The virus isn’t going away and coming back. The virus is still here. It’s up in some places and down in others,” Toner said.

WHAT IS THE FORECAST FOR THE COMING MONTHS?

Dr. Theo Vos of the University of Washington’s Institute for Health Metrics and Evaluation called those assurances “wishful thinking.”

Based on global models, his group has predicted that the coronavirus will surge in the fall as colder temperatures arrive in the United States.

“It’s likely to start picking up in October,” Vos said, with increased cases hitting in November, December and January.

(Reporting by Julie Steenhuysen; Editing by Peter Henderson and Will Dunham)