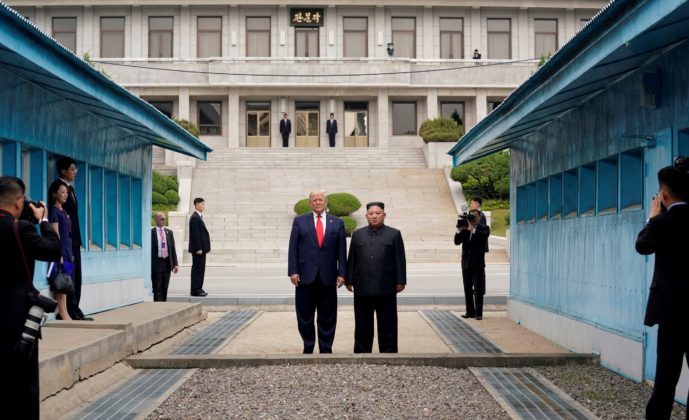 SEOUL (Reuters) – Negotiations aimed at dismantling North Korea’s nuclear and missile programs have been at a standstill after a working-level meeting with the United States in October in Stockholm collapsed.

North Korean leader Kim Jong Un has set a year-end deadline for Washington to change its stance in the negotiations, a deadline U.S. officials have downplayed as artificial.

North Korea’s ambassador to the United Nations, meanwhile, says denuclearization is now off the table.

Here are the competing demands that lead to the deadlock:

A North Korean envoy accused U.S. officials of sticking to their “old viewpoint and attitude” when he broke off the Stockholm talks.

Little was known about what North Korea and the United States specifically sought and offered during that meeting.

But Pyongyang has been demanding U.S. corresponding action to its proposed dismantling of a nuclear testing venue, including the lifting of crippling sanctions.

North Korea offered to abolish its Yongbyon nuclear complex in return for the revocation of key five U.N. resolutions during a failed summit between Kim Jong Un and U.S. President Donald Trump in February in Vietnam.

But the Americans argued decommissioning Yongbyon did not suffice, calling for Pyongyang to transfer nuclear weapons and bomb fuel to the United States.

North Korea had also said it dismantled its Sohae missile launch site as an initial step toward denuclearization, but the facility was used on Sunday for what Pyongyang said was a “very significant test”.

North Korea has stepped up calls for the United States to an end to joint military drills with South Korea, as well as retracting its “hostile policy” including criticizing Pyongyang’s human rights record.

U.S. officials came to Stockholm seeking a “complete, verifiable and irreversible denuclearization” of North Korea, and pushed for a moratorium on weapons tests as a first step, a diplomatic source in Seoul told Reuters on condition of anonymity.

Although some media reports said the United States had planned to propose temporarily lifting sanctions on coal and textile exports, the source said the Stockholm talks did not get into details.

Washington and Seoul have contemplated possible areas where sanctions be eased on the conditions they can be immediately put back if needed, such as a resumption of South Korean tours to the North.

North Korea, in contrast, has sought a “systematic guarantee” for the lifting of sanctions, singling out five U.N. resolutions at the Hanoi summit, the source said.

The five U.N. resolutions, adopted in 2016 and 2017, chiefly limited North Korea’s mineral exports and banned financial transactions, which were expected to prevent Pyongyang from earning at least $1 billion a year.

“But the Americans can’t take the risk of easing sanctions first, having already given a lot of gifts to Kim without substantial progress on denuclearization, including summits,” the source said.

“Sanctions are basically all they have to press North Korea.”

U.S. negotiators tried to fix a date for the next round of talks when the Stockholm meeting fell apart, but North Korean officials were uncooperative, the source said.

As the year-end deadline approaches, North Korea has ratcheted up tensions, firing dozens of missiles and warning Kim might take a different path if diplomacy with the United States fails.

Kim was “displeased” at Trump’s remarks Tuesday he could use military force against North Korea “if we have to”, a top North Korean commander said on Wednesday, warning of “prompt corresponding actions”.

Trump’s re-election battle and the impeachment inquiry against him may have emboldened Kim to overestimate North Korea’s leverage, the diplomatic source said.

“North Korea is pushing the envelope little by little with the tests, and the Americans are saying if those tests were not a big deal, but they’re not OK,” the source said.

“If there’s no progress until year-end, North Korea would have to do something, maybe an intercontinental ballistic missile test. Then the United States has no option but to respond even more sternly, and in a worst-case scenario, the negotiations could break down for good.”