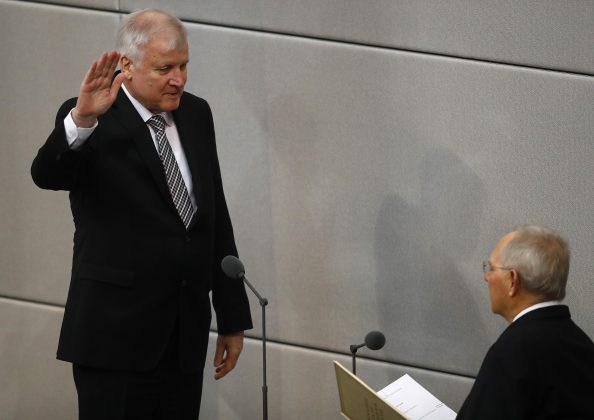 BERLIN (Reuters) – New Interior Minister Horst Seehofer said Islam does not belong to Germany, and set out hardline immigration policies in his first major interview since being sworn in this week, as he sought to see off rising far-right challengers.

His comments put him on a collision course with Chancellor Angela Merkel, who on Friday reiterated her long-held view that Islam was a part of Germany, even if the country was traditionally characterized by Christianity and Judaism.

“Islam does not belong to Germany,” Seehofer, a member of Merkel’s CSU Bavarian allies who are further to the right than her own Christian Democrats (CDU), told Bild newspaper in an interview published on Friday.

Seehofer said he would push through a “master plan for quicker deportations” and classify more states as ‘safe’ countries of origin, which would make it easier to deport failed asylum seekers.

Seehofer is particularly keen to show his party is tackling immigration ahead of Bavaria’s October regional election, when the far-right Alternative for Germany (AfD) is expected to enter that state assembly.

Both Merkel’s conservatives and their centre-left coalition partners – the Social Democrats – lost ground to the anti-immigrant AfD in September’s national election following the arrival in Germany of more than a million migrants and refugees.

Merkel, who has faced strong criticism from some Germans as well as elsewhere in Europe for agreeing to take in so many migrants, most of them Muslims, reaffirmed on Friday her vision of an inclusive, multi-ethnic Germany.

“There are now four million Muslims living in Germany and they practice their religion here and these Muslims belong to Germany, as does their religion – Islam,” she said.

Many of the Muslims living in Germany are of Turkish origin. But a majority of those who have arrived in the past three years are from Syria, Iraq and other conflict zones in the Middle East and beyond.

Seehofer’s comments come at a sensitive time for Germany’s Muslim community. Several organisations representing them complained on Thursday that politicians were not showing enough solidarity after a spate of attacks on mosques.

“Of course the Muslims living here do belong to Germany,” Seehofer told Bild, but added that Germany should not give up its own traditions or customs, which have Christianity at their heart.

“My message is: Muslims need to live with us, not next to us or against us,” he said.

Andre Poggenburg, head of the AfD in the eastern state of Saxony, said Seehofer was copying his party with a view to Bavaria’s October regional election: “Horst Seehofer has taken this message from our manifesto word for word.”

The far-left Linke and Greens condemned Seehofer’s message, and the Social Democrats’ Natascha Kohnen told broadcaster n-tv: “Saying that incites people against each other at a time when we really don’t need that. What we really need is politicians who bring people together.”

In their coalition agreement, Merkel’s CDU/CSU conservative bloc and the Social Democrats agreed they would manage and limit migration to Germany and Europe to avoid a re-run of the 2015 refugee crisis.

They also said they did not expect migration (excluding labor migration) to rise above the range of 180,000 to 220,000 per year.