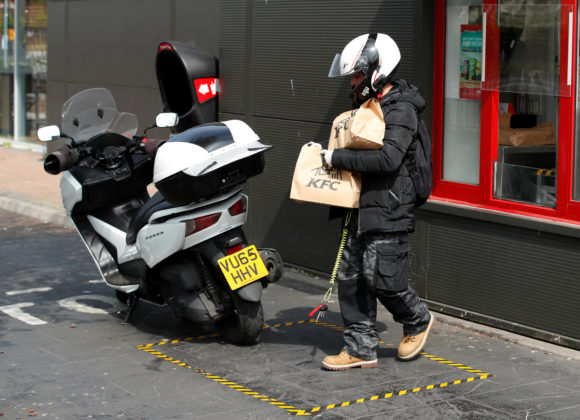 A KFC delivery man prepares to deliver an order, as the spread of the coronavirus disease (COVID-19) continues, Enfield, Britain, April 16, 2020. REUTERS/Andrew Couldridge

(Reuters) – Reported cases of the coronavirus have crossed 2.18 million globally and 147,265 people have died, according to a Reuters tally as of 1400 GMT on Friday.

– For an interactive graphic tracking the global spread, open https://tmsnrt.rs/3aIRuz7 in an external browser.

– For a U.S.-focused tracker with state-by-state and county map, open https://tmsnrt.rs/2w7hX9T in an external browser.

– The U.S. Secretary of State said nations should rethink adopting Huawei’s 5G networks in their telecommunications infrastructure, due to China’s role in the pandemic.

– Mexico’s deputy health minister, Hugo Lopez-Gatell, said the country might have as many as 55,951 people infected, twice the estimated number reported last week.

– Brazilian President Bolsonaro fired his health minister and again called for states to end stay-at-home orders. He also accused a house speaker of turning state governors against him and seeking to remove him from office.

– Britain was too slow to react on a number of fronts to the outbreak and 40,000 people could die, a leading public health professor told lawmakers on Friday, a day after the UK’s hospital death toll rose to 14,576.

– Germany’s health minister said the outbreak has become manageable again as the number of recovered patients has exceeded new infections every day this week.

– Nearly 1,300 people who died in the Chinese city of Wuhan, or half the total, were not counted in death tolls because of lapses, state media said on Friday, but Beijing dismissed claims that there had been any kind of cover-up.

– Singapore is assessing whether to place recovered migrant workers on cruise ships rather than back in dormitories that have become infection hotbeds, despite problems controlling onboard outbreaks encountered elsewhere.

– Japan said it hoped to start distributing relief payments next month, after extending a state of emergency nationwide.

– The number of infections in South Asia crossed 22,000 on Friday, driven by a rise in cases in India as the Maldives locked down its capital.

– Indonesia surpassed the Philippines on Friday as the country reporting the most infections in Southeast Asia.

– The pandemic will likely kill at least 300,000 Africans and risks pushing 29 million into extreme poverty, the U.N. Economic Commission for Africa said, calling for a $100 billion safety net for the continent.

– Iran paraded medical gear to mark its national Army Day as the country’s death toll rose to 4,958. A parliamentary report released earlier this week said the death toll might be almost double the figures announced by the health ministry, and the number of infections eight to 10 times more.

– Saudi Arabia’s grand mufti said that Muslim prayers during Ramadan and the Eid al-Fitr feast should be performed at home if the outbreak continues.

– Israel is heading off shortages of disposable surgical masks by mass-producing washable versions sized to fit everyone from children to bearded men.

– Oil prices were mixed on Friday as news of Trump’s plans was quickly overshadowed by China’s worst quarterly economic contraction on record.

– The International Monetary Fund said the economic fallout of the pandemic, combined with other problems, meant Latin America and the Caribbean would likely see “no growth” in the decade from 2015 to 2025.

– Chile´s export-driven economy will see a painfully slow recovery after being battered by mass protests and the coronavirus crisis, market watchers said.

– It is unclear whether measures designed to support the euro zone economy will be sufficient, Germany’s Bundesbank head told Bloomberg, adding that expansionary monetary and fiscal policies would remain necessary for some time.

– The outbreak will not affect China’s current account in the medium-to-long term, the foreign exchange regulator said on Friday.

– Fourteen Japanese companies have scrapped plans for initial public offerings this month, more than in the aftermath of the Sept 2001 attacks on the United States.