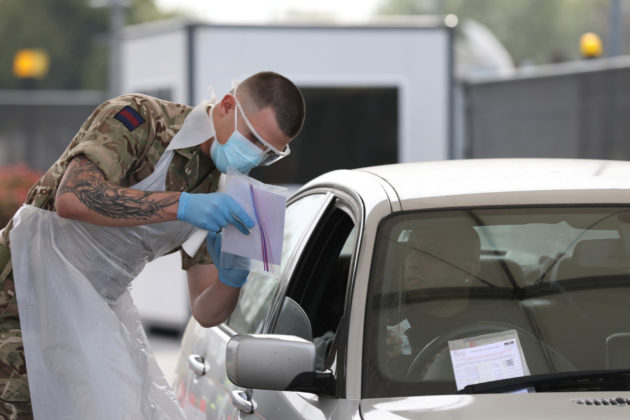 Reported cases of the coronavirus have crossed 2.62 million globally and 183,761 people have died, according to a Reuters tally as of 0200 GMT on Thursday.

* Hundreds of members of the U.S. House of Representatives will gather in Washington on Thursday to pass a $484 billion relief bill, bringing the unprecedented total of funds approved for the crisis to nearly $3 trillion.

* U.S. President Donald Trump on Wednesday ordered a temporary suspension of the issuance of green cards and permanent residence permits, in a move he said aimed at protecting American workers and jobs.

* Mexico, whose total cases exceeded 10,000, will increase spending on social programs and infrastructure projects by $25.6 billion.

* The northern Italian region of Lombardy began an antibody testing programme on Thursday as it prepared to start opening up its economy following weeks of lockdown.

* Spain’s daily increase in fatalities further steadied at around 2% on Thursday, as the government apologised for confusion over lockdown rules for children.

* French president told mayors that unwinding the lockdown would not be done region by region, with a plan to be unveiled around Tuesday next week.

* The French government wants all retail outlets other than restaurants, bars and cafes to be able to reopen once a nationwide lockdown is lifted on May 11.

* Chancellor Angela Merkel urged Germans to show endurance and discipline to get through the pandemic that is “still at the beginning”, and called for a bigger European Union budget to support economic recovery in the bloc.

* The British government came under sustained pressure over its coronavirus response when members of parliament got their first major opportunity in a month to hold it to account.

* Life is unlikely to return to normal even when the tightest restrictions are lifted, and social distancing measures could stay for the rest of this year and beyond, Scottish first minister said.

* Russia showed tentative signs of a flattening infection curve, but the Kremlin said the situation remained tense and officials moved to tighten lockdown measures in 21 regions.

* Hungary will decide next week on the future of lockdown measures as it prepares for a restart of the economy.

* Greece extended its general lockdown by a week to May 4, saying any relaxation would be staggered over May and June.

* South Asia’s infections have crossed 37,000, with more than half in India, complicating the task of governments looking to ease lockdowns.

* Spooked by a sharp increase in cases in the navy, Taiwan is debating whether to consider a broad lockdown.

* Nearly 50 crew members on an Italian cruise ship docked for repairs in Japan’s Nagasaki have tested positive, raising concern about the strain on the city’s hospitals.

* All member nations of the WHO should support a proposed independent review into the pandemic, Australia’s prime minister said, further threatening strained ties with China.

* Iranians have returned to shops, bazaars and parks this week as the country eases restrictions, and the daily increase in the death toll remained below 100 on Thursday.

* African nations that lack ventilators will receive some from a donation of 300 supplied by the Jack Ma Foundation.

* The governors of Nigeria’s 36 states agreed to ban interstate movement for two weeks.

* Botswana’s president and lawmakers were released from two weeks in quarantine after testing negative.

* Caution gripped markets on Thursday, with stocks falling before a key Eurogroup meeting to discuss joint stimulus measures, offsetting optimism from a fresh round of U.S. coronavirus aid and a recovery in oil prices.

* European Union leaders will on Thursday take their first step towards joint financing of an economic recovery but will kick any difficult decisions about the details into the long grass.

* A record 26 million Americans likely sought unemployment benefits over the last five weeks, meaning all the jobs created during the longest employment boom in U.S. history were wiped out in about a month.

* Japan offered its bleakest assessment of the economy in over a decade as the pandemic threatens to tip the world’s third-largest economy into a deep recession.

* South Korea’s ruling party and the government agreed to provide cash handouts to every household, not just to families below the top 30 percentile of income as previously announced.

* Britain’s economy is crumbling and government borrowing is soaring to the highest levels in peacetime history, increasing pressure on the government to set out an exit strategy.

* India froze inflation-linked increases in salaries and pensions for more than 11 million federal employees and pensioners to generate nearly $10 billion to help combat the outbreak.