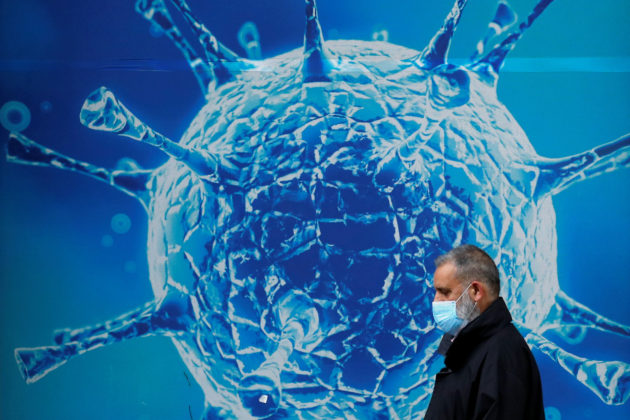 FILE PHOTO: A man wearing a protective face mask walks past an illustration of a virus outside a regional science centre, as the city and surrounding areas face local restrictions in an effort to avoid a local lockdown being forced upon the region, amid the coronavirus disease (COVID-19) outbreak, in Oldham, Britain August 3, 2020. REUTERS/Phil Noble

(Reuters) – Coronavirus infections slowed in Australia and New Zealand, while Britain said it was at a “tipping point” on COVID-19 as European countries mulled tightening restrictions to curb a sharp resurgence in cases.

* Britain is at a tipping point on COVID-19, health minister Matt Hancock said, warning that a second national lockdown could be imposed if people don’t follow government rules designed to stop the spread of the virus.

* The Czech government could declare a state of emergency if a recent spike in cases continues in the coming days, Health Minister Adam Vojtech said.

* Protesters in some poorer areas of Madrid that are facing a lockdown to stem a soaring infection rate took to the streets on Sunday to call for better health provisions, complaining of discrimination by the authorities.

* Schools in Seoul and nearby areas resumed in-person classes for the first time in almost a month after daily cases dropped to the lowest levels since mid-August.

* Australia’s coronavirus hotspot of Victoria reported on Monday its lowest daily rise in infections in three months, although state Premier Daniel Andrews said there were no plans yet to ease restrictions sooner than expected.

* New Zealand Prime Minister Jacinda Ardern lifted all coronavirus restrictions across the country, except in second-wave hotspot Auckland, as the number of new infections slowed to a trickle.

* The United States set a one-day record with over 1 million coronavirus diagnostic tests being performed, but the country needs 6 million to 10 million a day to bring outbreaks under control, according to various experts.

* Brazil and Argentina, Latin American nations seeking more time to commit to the global COVID-19 vaccine facility known as COVAX, said they intend to do so as soon as possible after missing Friday’s deadline.

* Morocco signed a deal with Russia’s R-Pharm to buy a COVID-19 vaccine produced under a license from Britain’s AstraZeneca, the health ministry said, as its total number of cases approached 100,000.

* Israel entered a second nationwide lockdown at the onset of the Jewish high-holiday season, forcing residents to stay mostly at home amid a resurgence in new cases.

* Moderna Inc said it was on track to produce 20 million doses of its experimental coronavirus vaccine by the end of the year, while maintaining its goal of readying 500 million to 1 billion doses in 2021.

* British manufacturers see no evidence of a ‘V’-shaped recovery from the pandemic underway and many are planning to slash investment, a business survey showed.