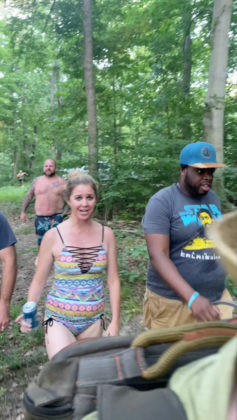 Vauhxx Booker (R) walks before what he said was an assault on him by several white men threatening to lynch him, before a group of bystanders and friends intervened to stop the attack, at Lake Monroe, Indiana, U.S. July 4, 2020, in this still image taken from video obtained from social media. Video taken July 4, 2020. VIDEO OBTAINED BY REUTERS/via REUTERS

By Steve Gorman and Mark Hosenball

(Reuters) – The FBI is investigating a hate-crime report lodged by a Black civil rights activist in Indiana who said he was assaulted by several white men threatening to lynch him before a group of bystanders and friends intervened to stop the attack.

The federal inquiry into the July 4 confrontation at Lake Monroe, near Bloomington, Indiana, was confirmed to Reuters on Thursday by FBI and U.S. Justice Department officials in Washington and Indianapolis.

Vauhxx Booker, a member of the Monroe County Human Rights Commission, said he and some friends were at a public park on the lake on Saturday when a man wearing a cap emblazoned with a Confederate flag accused them of trespassing on private property.

The conflict escalated when five white men who appeared to be drunk grabbed Booker, dragged him to the ground and pinned him against a tree while punching him as one of his assailants yelled, “get a noose,” according to his account of the incident on Facebook.

A group of onlookers and Booker’s acquaintances, all of whom were also white, began filming the confrontation with cellphones and demanding the attackers release him, as one of the mob shouted back, “You get out of here, leave the boy with us.”

The attackers finally released Booker, and he and his friends retreated to call 911. Video of the incident has gone viral on social media, fueling U.S. racial tensions following the May 25 death of George Floyd, a Black man, under the knee of a white policeman in Minneapolis.

Booker, also a Black Lives Matters organizer, said he suffered a concussion, as well as cuts and bruises and patches of hair ripped from his head, but was grateful to those who came to his defense.

“I had friends and strangers who were willing to put their lives and their bodies on the line to make sure that a man they didn’t know, who looked different than them was able to survive the situation,” Booker said at a news conference this week.

A spokesman for the Indiana Department of Natural Resources, whose officers responded to the incident and were criticized for failing to make arrests at the time, said the agency is cooperating with the FBI while continuing its own investigation with local prosecutors.

“Our officers arrived that evening, talked to witnesses at the time from both parties and have continued to conduct interviews as part of the ongoing investigation,” DNR spokesman James Brindle told Reuters on Thursday.

Booker’s lawyer, Katharine Liell, told reporters on Wednesday the attack was “clearly racially motivated,” and that her client survived only because witnesses came to his aid.

(Reporting by Mark Hosenball in Washington and Steve Gorman in Eureka, Calif.; Writing by Steve Gorman; Editing by Daniel Wallis)