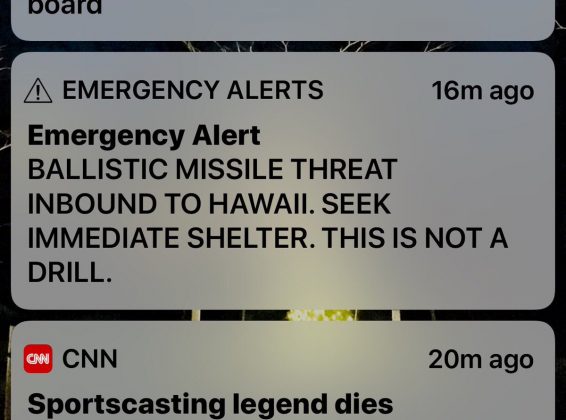 A screen capture from a Twitter account showing a missile warning for Hawaii, U.S., January 13, 2018 in this picture obtained from social media. Courtesy of TWITTER @valeriebeyers/via REUTERS

(Reuters) – Hawaii apparently did not have adequate safeguards in place to prevent a false emergency alert about a missile attack that panicked residents for more than a half-hour before it was withdrawn, a federal official said on Sunday.

Speaking after Saturday’s errant ballistic missile warning to Hawaii residents, Federal Communications Commission Chairman Ajit Pai said government officials must work to prevent future incidents. The FCC “will focus on what steps need to be taken to prevent a similar incident from happening again,” he said.

Officials at all government levels need to work together “to identify any vulnerabilities to false alerts and do what’s necessary to fix them.”

The alert, sent to mobile phones and broadcast on television and radio shortly after 8 a.m. local time, was issued amid raised tensions over North Korea’s development of nuclear weapons and missiles.

The message, which was not corrected for 38 minutes, stated: “EMERGENCY ALERT BALLISTIC MISSILE THREAT INBOUND TO HAWAII. SEEK IMMEDIATE SHELTER. THIS IS NOT A DRILL.”

“The false emergency alert sent yesterday in Hawaii was absolutely unacceptable,” Pai said. “It caused a wave of panic across the state … Moreover, false alerts undermine public confidence in the alerting system and thus reduce their effectiveness during real emergencies.”

Corrections should be “issued immediately in the event that a false alert does go out,” Pai said. The FCC probe so far suggests Hawaii did not have “reasonable safeguards or process controls in place.”

The FCC has jurisdiction over the wireless alerts and has proposed technical upgrades to precisely target them to communities. It plans to vote on revisions to the alert system later this month.

Hawaii Governor David Ige said on Saturday he was “angry and disappointed” over the incident, apologized for it and said the state would take steps to ensure it never happens again.

Ige said the alert was sent during an employee shift change at the Hawaii Emergency Management Agency and that the state had no automated process to get out the word that it was a false alarm. “An employee pushed the wrong button,” Ige said.

Senator Brian Schatz, a Hawaii Democrat, spoke to Pai on Saturday and praised him for working “with us on developing best practices on the communications side for states and municipalities to make sure this never happens again. This system failed miserably, and we need to start over.”

A 2013 government audit found the Federal Emergency Management Agency has improved a federal alerting system known as the Integrated Public Alert and Warning System, “but barriers remain to fully implementing an integrated system.”

The system can receive and authenticate internet-based alerts from state and local government agencies and disseminate them to the public.

Some states were reluctant to fully implement a system and that “decreases the capability for an integrated, interoperable, and nationwide alerting system,” the report said.