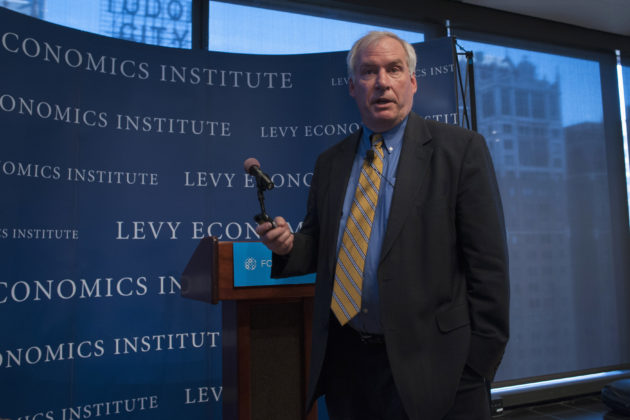 FILE PHOTO: The Federal Reserve Bank of Boston's President and CEO Eric S. Rosengren speaks during the "Hyman P. Minsky Conference on the State of the U.S. and World Economies," in New York, April 17, 2013. REUTERS/Keith Bedford

By Jonnelle Marte and Howard Schneider

(Reuters) – The U.S. economic slowdown is likely to continue as more restrictions are put in place to control the coronavirus epidemic, and Americans will have to learn to “live with” the virus for the rest of the year, two Federal Reserve policymakers said on Wednesday.

Consumer spending will probably remain weak relative to the past as people avoid activities that require high levels of social interaction for health reasons, Boston Fed President Eric Rosengren said during an online event organized by the South Shore Chamber of Commerce in Massachusetts.

“The forecast for the U.S. economy this fall is quite uncertain, but my view is that the recent slowdown in economic activity that we have seen in high-frequency data is likely to continue,” Rosengren said.

With a vaccine unlikely to be ready in the immediate future, consumers and businesses need a plan to manage the risks of the virus throughout the fall and winter, Rosengren said.

Dallas Fed President Robert Kaplan voiced similar concerns, saying in a webcast event with the Lubbock Chamber of Commerce in Texas that Americans need to learn to “live with” the virus, using safety measures such as masks so the economy can remain open.

Rosengren said the parts of the country that enacted longer shutdowns earlier in the crisis were now benefiting from better health outcomes and more robust spending. States that lifted restrictions too quickly saw a short-lived increase in economic activity, which became muted after a rise in infections, he said.

“Limited or inconsistent efforts by states to control the virus based on public health guidance are not only placing citizens at unnecessary risk of severe illness and possible death – but are also likely to prolong the economic downturn,” Rosengren said.

Kaplan said he expects the U.S. unemployment rate to remain elevated at 9% at the end of the year, but noted it could be lower if businesses and consumers take steps to control the virus. The unemployment rate in July was 10.2%.

“If we don’t follow that, while people may feel freer, the economy will grow slower,” Kaplan said.

Referring to the Fed’s Main Street Lending Program, which is meant to carry small and medium-sized businesses through the crisis, Rosengren said that low early use of the program was not a sign of failure and that more businesses may turn to the facility in the fall if the economy worsens.

Asked about the rise in U.S. government debt, Rosengren said he supports strong fiscal stimulus but cautioned it must be paired with efforts to contain the virus.