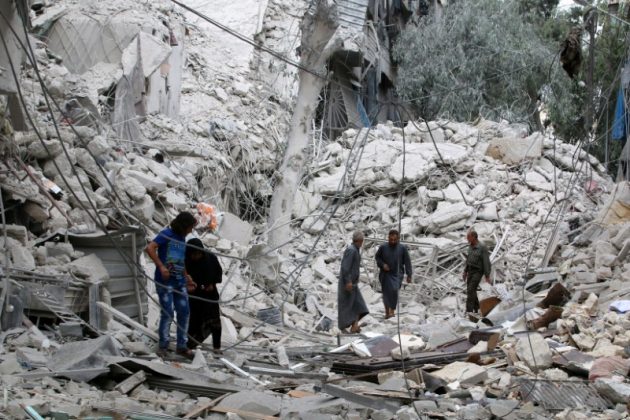 By Ellen Francis and Tom Perry

BEIRUT (Reuters) – Warplanes launched some of the heaviest air strikes yet on rebel-held areas of Aleppo on Friday after the Russian-backed Syrian army declared an offensive to fully capture Syria’s biggest city, killing off any hope of reviving a ceasefire.

Residents said the streets were deserted as the 250,000 people still trapped in the besieged opposition-held sector of Aleppo sought shelter from jets. The army said the operation would include a ground attack, and could last “for some time”.

The rebels and the Syrian Observatory for Human Rights monitoring body described raids by warplanes they said must belong to Russia. Residents also spoke of attacks by helicopters using bombs made from oil drums, a tactic usually attributed to the Syrian army.

“Can you hear it? The neighborhood is getting hit right now by missiles. We can hear the planes right now,” Mohammad Abu Rajab, a radiologist, told Reuters. “The planes are not leaving the sky, helicopters, barrel bombs, warplanes.”

The intense bombardment left no doubt that the Syrian government of President Bashar al-Assad and its Russian allies had spurned a plea from U.S. Secretary of State John Kerry to halt flights to resurrect the ceasefire, which lasted a week before collapsing on Monday.

A rebel commander said the blasts were the fiercest the city had faced.

“I woke up to a powerful earthquake though I was in a place far away from where the missile landed,” he said in a voice recording sent to Reuters. His group had “martyrs under the rubble” in three locations.

In a late night announcement on Thursday, the Syrian military announced “the start of its operations in the eastern districts of Aleppo”, and warned people to stay away from “the headquarters and positions of the armed terrorist gangs”.

Elaborating on this on Friday, a military source said the offensive would be a “comprehensive one”, with a ground assault following air and artillery bombardment. “With respect to the air or artillery strikes, they may continue for some time,” it said.

There was no immediate comment from the Russian or Syrian militaries detailing Friday’s air strikes.

The Syrian army’s declaration of the offensive coincided with international meetings on Syria in New York, the latest diplomatic efforts officially intended to revive the truce, which was brokered by the United States and Russia.

Its collapse, the same fate as all previous efforts to halt a 5-1/2-year-old war that has killed hundreds of thousands of Syrians, has doomed what may be the final bid for a peace breakthrough before President Barack Obama leaves office.

The Syrian government, strengthened by Russian air power and Iranian-backed Shi’ite militias, has been tightening its grip on rebel-held districts of Aleppo this year, and this summer achieved a long-held goal of fully encircling the area.

The government already controls the city’s western half, where fewer people have fled. Before the war, the city held nearly 3 million people and was Syria’s economic hub.

Recovering full control of Aleppo would be the most important victory of the war so far for Assad, who has sought to consolidate his grip over the western cities where the overwhelming majority of Syrians lived before fighting drove half of the nation from their homes.

The Observatory said there were at least 40 air strikes since midnight.

Ammar al Selmo, the head of civil defense rescue service in opposition-held Aleppo, said three of its four centers in Aleppo had been hit. “What’s happening now is annihilation in every sense of the word,” he told Reuters. “Today the bombardment is more violent, with a larger number of planes.”

The U.S.-Russian agreement marked their second attempt this year to halt the war. It was supposed to bring about a nationwide ceasefire, improved humanitarian aid access, and a joint U.S.-Russian effort against jihadist groups including Islamic State and the Nusra Front, long al Qaeda’s Syrian wing.

But the ceasefire collapsed into renewed bombardments on Monday, including an attack on an aid convoy that Washington has blamed on Moscow, which denies involvement.

Assad remains defiant, saying on Thursday he expected the conflict to “drag on” as long as it is part of a global conflict in which the groups fighting him are backed by Saudi Arabia, Qatar, Turkey and the United States.

On Thursday at the United Nations, the United States and Russia failed to agree on how to revive the ceasefire during what U.N. Syria mediator Staffan de Mistura called a “long, painful, difficult and disappointing” meeting.

The International Syria Support Group, including Moscow, Washington and other major powers, met on the sidelines of the annual United Nations gathering of world leaders in New York.

“We have exchanged ideas with the Russians and we plan to consult tomorrow with respect to those ideas,” Kerry said, expressing concern at the reports of the planned new Syrian offensive. “I am no less determined today than I was yesterday but I am even more frustrated.”